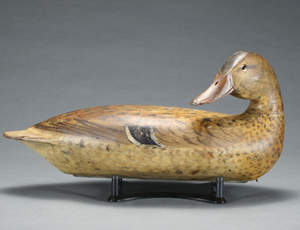 Antique duck decoy carved by Robert Elliston and purchased in April by former Illinois Governor Jim Thompson for $100,625. Image courtesy of Guyette and Schmidt, Inc., the company that conducted the auction.

In the world of collectibles and antiques, the decoy discovery and then $100,625 sale at auction was a true believe-it-or-not story, said Joe Tonelli of Spring Valley.

Tonelli, Midwest representative for the company that conducted the auction during the Midwest Decoy Collectors Association 25th annual decoy show, isn’t certain how often a wooden duck decoy carved perhaps 110 years ago by Robert Elliston of Bureau was used and how many waters it floated in over the years, but he figures it sold last month for about 100,000 times its original sale price.

“It’s kind of a fairy-tale story. Elliston originally sold that decoy for about 75 cents,” said Tonelli, noting Elliston resided south of Bureau, kept bees, carved decoys and built boats and supplied most of the decoys and boats for the Princeton Game and Fish Club in Bureau County and Senachwine Duck Club in Putnam County.

Tonelli said he cannot tell the names of the sellers or all the details of how the decoy was discovered, but a young couple that originally “met at a church thing” bought an old, extremely dilapidated farmhouse north of Indianapolis. The new buyer of the old house climbed up into the attic for restoration work and to put in some insulation. He was up in the rafters and in the corner found a gunnysack, which came open to reveal about 10 antique duck decoys.

As Tonelli tells it, the owner took the decoys to the basement and set back to work. His wife discovered a lead keel strip on some of the ducks stamped “The Elliston Decoy.” She went to a friend’s house, Googled that phrase and came across stories Joe Tonelli’s wife Donna had written about Elliston for Decoy Magazine.

Joe told the seller that seven of the decoys were by Mason Decoy Co. from Detroit, and brought about $15,000 total; but three were rarer Elliston decoys.

Judging from the decoy cord and the big lead weights still attached to the rig of decoys, Tonelli estimated “Those ducks had probably been stored for a minimum of 60 to 70 years and forgotten.” His theory is the ducks were used on the Illinois River first and, just maybe, taken to Indiana for hunting on the Kankakee River marsh before they were put up and out of sight.

One of the Elliston ducks was a mallard drake with head pointing straight forward, a fairly common example. Another was an extremely rare “turned-head sleeper” a sleeping hen mallard that eventually brought $40,250 at the auction in St. Charles.

The decoy with the turned head in a preening position was the real prize, and when it showed up in the auction catalog, former Governor Thompson contacted Tonelli to ask about it.

Tonelli knew it was rare and old because it had the round-backed characteristics of Elliston’s pre-1900 decoys. He also figured the estimate listed in the catalog was way too low at $12,000-$15,000, and he told Thompson he thought it was “the finest decoy in the auction.”

“It’s a very rare one,” Thompson told a NewsTribune reporter. “I got a collection that I started about eight years ago. It’s a collection of Illinois River duck decoys only those decoys hand-carved and painted by known Illinois River carvers, in original paint, no repairs.

“The only major carver I didn’t have was Elliston.”

Because Elliston’s ducks predate even those of famous carver Charles Perdew of Henry, a lot of Elliston’s decoys are in poor condition, Thompson said.

“Up came this, not only in wonderful shape but it’s a rare one, a preener. OK, this is the one I’ve been waiting for.”

Thompson was bidding against a man from New Jersey and another man from Iowa, he said.

Thompson has installed the decoy in his collection in Michigan, he said.

He added that Elliston’s wife was, much like Perdew’s, an outstanding painter. Thompson has about 40 decoys, and considers the Elliston specimen his crown jewel.

He said it’s easier to list what he doesn’t collect. He has a collection of every signature of every Illinois governor. He has campaign buttons going back to about 1870, he said.

Thompson’s decoy collection also reflects his hobby of duck hunting, which he started up when he began collecting decoys, he said.

“Your area is a great area for hunting,” Thompson told a NewsTribune reporter. “If anyone has any good Illinois River decoys, call me.”

Erie Art Museum showcases local decoy carvers of the past