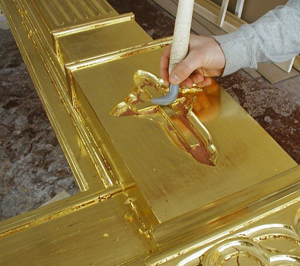 An agate stone tool is used to burnish gold leaf to wood during the water gilding process. Photo courtesy of Wikemedia Commons.

NEW ORLEANS (AP) – Bobby Franks, owner of Uptown Restoration, loves being his own boss. He got into the furniture crafting and restoration business, and has acquired a variety of specialty skills, such as woodturning, gilding, leatherworking and French polishing, because he likes to do things on his own terms, without having to rely on a boss or a subcontractor to get the job done.

“We don’t contract out for anything,” he said.

Franks, 60, studied biology in college. The son of a furniture maker who had grown up in the trade, Franks needed money, so he made cold calls to antique stores and drummed up business restoring antiques. The work appealed to him, and the jobs kept coming.

“It just kind of snowballed,” he said. “It was always something I liked doing.”

Not content to do only the basic woodworking of furniture design and repair, Franks began accumulating additional skills, working in gold leaf and various veneers and using a lathe to make turned posts and columns.

“There was no formal training – just a lot of time and energy,” Franks said of his expanded skill set. “I just picked it up.”

Some skills, such as leather inlay, were harder to acquire than others.

“There was a guy in New Orleans, in the Marigny,” he recalled. “He did all the French Quarter (leather) work, and he would never let me go into his studio and see how it worked.

“I’d go over to the studio and he’d see me and close the curtains in the back.”

Franks knew that leatherwork, such as the kind used on stately desks or fine bookbinding, involved gold-leaf embossing using patterned metal rolls. He tracked down the name of the New York company that designed and manufactured many of the rolls used in the country, and called there for information on the process.

Franks learned that the patterned rolls are attached to a heated instrument, which is rolled over a strip of gold leaf to emboss the design onto the leather. Franks experimented with the method, which he said often requires a second person to keep the gold leaf even and in place, and now he restores leather inlay in-house.

That kind of specialty work makes for a job that’s “never the boring, monotonous kind of work,” Franks said. “It’s always something different.”

His favorite skill, though, is French polishing, a time-consuming process that gives wood a silky smooth luster. It’s a common, high-gloss finish for dining room tables and other fine pieces of furniture.

The polish, really shellac, is made from the secretions of beetles. It comes as orange flakes, which are added to rubbing alcohol. A special piece of cloth, which must consantly be kept wet, is used to apply the shellac in thin coats.

“The trick is to know how much shellac to put on the (cloth), because if you use too much it sticks,” Franks said. “You have to put on a lot of thin coats, and sand each one in between. It’s very time-consuming.”

Time-consuming, yes, but not monotonous – at least not to Franks. The appeal, he said, is simple: “It’s just the satisfaction of a beautiful finish.”

Information from: The Times-Picayune, http://www.nola.com

Furniture Specific: Garbage in – garbage out