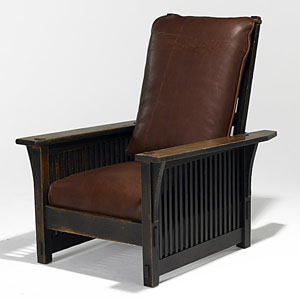 More than 100 years ago, Gustav Stickley began creating well-made wood furniture with a simplicity of design. The creation of a brand soon followed, with Stickley offering everything from candlesticks and linens to a magazine that included home plans in his Craftsman style.

The first national touring exhibit to give a comprehensive look at Stickley’s work opened last week at the Newark Museum in New Jersey, with the majority of pieces on display coming from private collections.

The show features more than 100 works, including furniture, metalwork, textiles and architectural drawings. It goes to the Dallas Museum of Art on Feb. 13 and then to the San Diego Museum of Art on June 18.

“He became someone who was offering a complete lifestyle,” said David Cathers, who has published books on Stickley and the Arts and Crafts Movement.

The exhibit “Gustav Stickley and the American Arts & Crafts Movement” offers a glimpse of Stickley’s work. It starts in 1900 – when the furniture maker with a factory in the Syracuse, N.Y., area began producing items his new style – and goes to 1913, when he opened a department store in a 12-story Manhattan building that included everything from home to garden supplies, and was topped with a restaurant.

Following the opening of that megastore, though, tastes began to change and Stickley’s Craftsman style waned in popularity. By 1915, he’d declared bankruptcy, said Kevin W. Tucker, decorative arts and design curator at the Dallas Museum of Art, which organized the traveling exhibit.

For those dozen or so years though, his work flourished. The simple style of the Arts and Crafts Movement was a revelation to customers who were rejecting the fussy style of the Victorian period.

From The Craftsman magazine to his own stores in New York, Washington and Boston, Stickley offered customers a lifestyle based on his philosophy of simple design and quality materials. At one point, Tucker said, Stickley had more than 100 retailers who sold his work.

Ulysses Dietz, senior curator and curator of decorative arts at the Newark Museum, said that Stickley’s products were aimed at the “educated, sophisticated middle-class American.”

“Stickley really represents the birth of modern design in America,” said Dietz, who added that Stickley’s designs show “how very beautiful simplicity can be.”

Tucker said that Stickley’s furniture – made by a combination of machine and hand – has endured over the decades because of its quality of design, materials and construction.

“He had a complete holistic approach to creating, marketing and ultimately selling his work,” Tucker said.

It was an exhibition on the Arts and Crafts Movement at Princeton University in the early 1970s that helped revive interest in Stickley, who died at the age of 84 in 1942 in Syracuse. Collectors then became increasingly interested in his furniture.

“I think what makes them stand out, they’re so well done. The design of them is so good,” Cathers said.

Jerry Cohen, who has a Connecticut gallery that sells Stickley’s furniture and is also a partner in a New Jersey auction house, said that depending on such factors as when it was made and its condition, pieces of Stickley’s furniture can sell for anywhere from a couple hundred dollars to half a million for the very rare.

The exhibit also coincides with the kickoff of the 100th anniversary celebration for the log house on his country estate, Craftsman Farms, in Parsipanny, N.J. Stickley and his family lived there only about six years, but the design of the log home with a rock foundation and roof of green ceramic tiles reflects his feelings on the importance of living with nature, said Heather Stivison, executive director of the Stickley Museum at Craftsman Farms.

Sound of Pook & Pook’s gavel to replace forge hammer at Oct. 1 a...