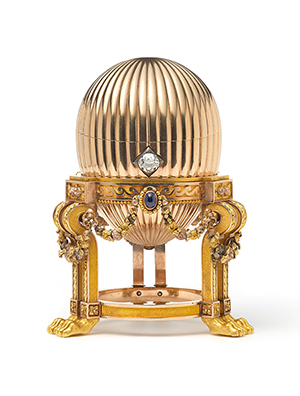 The tragic story of the last Tsar and his family has been fascinating the world for almost a century and most people will immediately associate the iconic Fabergé eggs with the Russian Royal family. Only 50 of these lavish works of art were ever created, each of them a unique design and a certain mysteriousness is attached to all of them.

After the revolution the Eggs were seized by the Bolsheviks. Some they kept, but most were sold to the West. Two were bought by Queen Mary and are part of the British Royal Collection. The remainder belong to Museums, Oligarchs, Sheikhs and heiresses. Eight of them, however, are missing of which only three are believed to have survived the revolution. Now, one of them has been discovered under the most miraculous circumstances.

This Fabergé egg, which is beautifully crafted and contains a Vacheron Constantin watch inside, is sitting on an elaborate, jewelled gold stand and measures 8.2 cm in height in total. It was given by Alexander III Emperor and Autocrat of all the Russians to his wife Empress Maria Feodorovna for Easter 1887.

Easter is the most important of all Russian Orthodox festivals and it’s a long-established tradition to exchange Easter eggs. Carl Fabergé, goldsmith to the Tsars, created the lavish Imperial Easter eggs for both Alexander III and Nicholas II from 1885 to 1916. The Eggs are his most prized creations and have become bywords of luxury and craftsmanship.

This egg was last seen in public over 112 years ago, when it was shown in the Von Dervis Mansion exhibition of the Russian Imperial Family’s Fabergé collection in St. Petersburg in March 1902. In the turmoil of the Russian revolution the Bolsheviks confiscated the Egg from the Empress. It was last recorded in Moscow in 1922 when the Soviets decided to sell it as part of their policy of turning ‘Treasures into Tractors’. Its fate after this point was unknown and it is was feared it could have been melted for its gold and lost forever.

It was only in 2011 that Fabergé researchers discovered that the Third Imperial Egg survived the revolution, when it was discovered in an old Parke-Bernet catalogue. Its provenance had been unknown and so it was sold at auction on Madison Avenue, New York on 7th March 1964 as a ‘Gold watch in egg form case’ for $2,450 (£875 at the time). This discovery started a worldwide race to discover the whereabouts of the egg, which was now worth tens of millions of dollars.

In the meantime the egg was bought at a Midwestern US flea market. The buyer lived a modest life and tried to make extra money by buying gold and selling it for its scrap metal value. When he spotted the egg, he thought he could make an easy $500, although they had to pay $14,000 for its scrap metal value. But what had worked on many occasions, did not work this time. He had overestimated its worth and couldn’t sell it. No one spotted its potential and, luckily, no one offered more than the owner had paid for it, hence it was saved from the melting pot. The egg has several scratches on it where the metal was tested for its gold content.

The egg became a financial burden to its unknowing owner. One evening in despair the owner tapped ‘Egg’ and ‘Vacheron Constantin’ into Google and a (London) Daily Telegraph article regarding the egg’s survival appeared, quoting Kieran McCarthy, director of Wartski, the London-based, Royal Warrant-holding experts on the work of Carl Fabergé.

Recognizing his egg in the article the owner was unable to sleep for days. He got on a plane to London to find Kieran and to show him images of the egg. Kieran was left speechless by the images and was almost certain the lost egg had been found, but to confirm its identity and ensure it was not a very clever fake, he traveled to the US. When he arrived in a small town in the Midwest, he was shown into the kitchen of the owner’s home and presented with the egg, which was slightly smaller than the large cupcake positioned next to it. After an examination he confirmed that it was indeed the lost Imperial treasure. It had traveled from the hands of an Empress in the grandeur of Imperial St. Petersburg to a scrap metal dealer in modern-day America.

Wartski acquired the egg for a private collector, making the finder an art historical lottery winner, receiving multiple millions of dollars per centimeter of egg. The collector has generously allowed the egg to be displayed in London where it will be on view for only four days in a specially designed exhibition at Wartski.

The last Fabergé clock sold in public, was a non-Imperial one known as the ‘Rothschild Egg’ which sold at Christie’s in 2007 for $18.5 million.

Two other of the original eight missing Imperial Eggs are known to have survived the Russian Revolution. They are the 1889 Necessaire Egg (heavily chased gold, set with pearls and gemstones, without a stand, containing 13 miniature toilet articles) and last recorded at Wartski in June 1952. The 1888 Cherub Egg with Chariot (a gold egg resting in a chariot drawn by a Cherub) was last recorded with Armand Hammer in New York in 1934.

The reeded yellow gold egg opens by pressing the brilliant-cut diamond pushpiece, to reveal a Vacheron Constantin watch with diamond set gold hands that is hinged to allow it to stand upright, the egg is supported on an elaborate sabléd gold stand, stood on lion paw feet and encircled by finely chased coloured gold garlands suspended from three cabochon blue sapphires topped with rose diamond set bows. Made in the workshop of Fabergé’s Chief-Jeweller: August Holmström in St. Petersburg, 1886-1887. Height 8.2 cm.

Founded in North Wales in 1865, Wartski is a family firm of antique dealers specialising in the work of Carl Fabergé, Russian Works of Art, Fine Jewellery and Silver. They are jewellers to the H. M The Queen and H. R. H The Prince of Wales. They supplied the Welsh gold wedding ring for H. R. H Prince William’s wedding to Miss Middleton.

The business thrived under the patronage of King Edward VII and has attracted a colourful clientele ever since. In 1911, Emanuel Snowman, Morris Wartski’s son-in-law, opened another branch of the firm in London. He was among the first to negotiate with the government of the Soviet Union in the 1920s, purchasing treasures that had been confiscated after the revolution of 1917. For more than a decade he acquired many important works of art, including twelve of the Imperial Fabergé Easter Eggs and the gold chalice commissioned by Catherine the Great (now in the Hillwood Museum). A. Kenneth Snowman, Emanuel’s son, built upon his father’s work, adding an academic dimension to the business through his pioneering research and exhibitions. His first book, ‘The Art of Carl Fabergé, was published in 1953. Kenneth Snowman was immortalized by Ian Fleming, a Wartski customer, in the James Bond novella Property of a Lady which described him in Wartski’s premises.

Wartski is still a welcoming family firm. Its directors are still leading experts in their fields; they have been published widely and curated many exhibitions.

Fabergé started creating Easter Eggs for Tsar Alexander III. It is both a scared and intimate object; a celebration of Easter, the most important of Russian Orthodox festivals, and simultaneously a token of the Tsar’s heartfelt love for his wife the Empress Marie. Later, as the Imperial Fabergé eggs had become icons, its creator produced a number of lesser eggs in homage to those made for the Tsars. They are known as non-Imperial eggs, of which the Apple Blossom Egg is an excellent example. 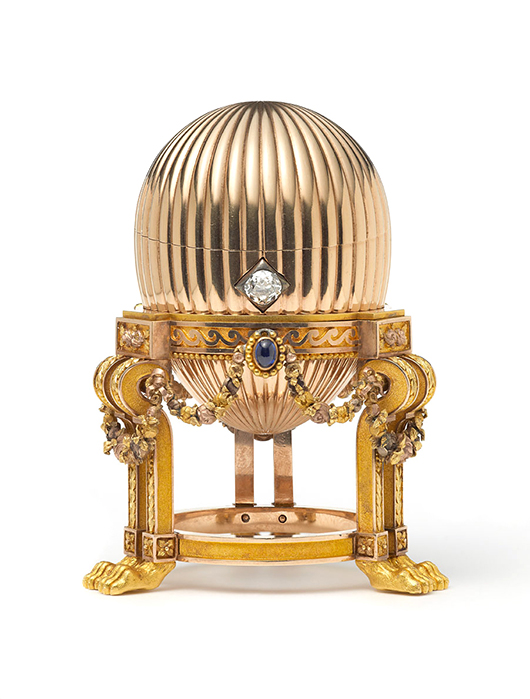 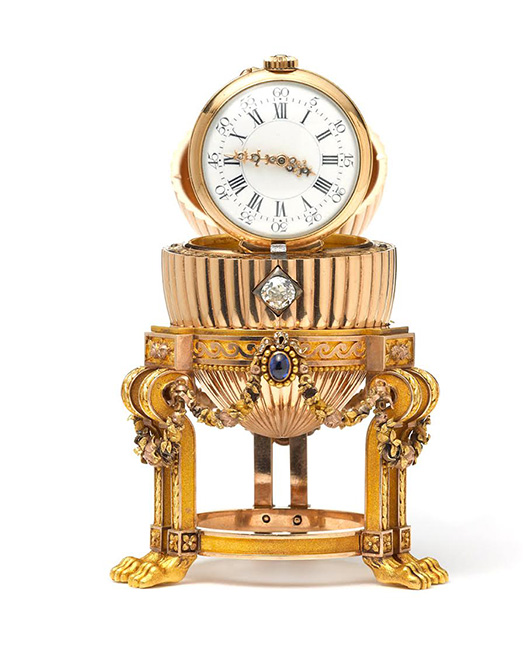 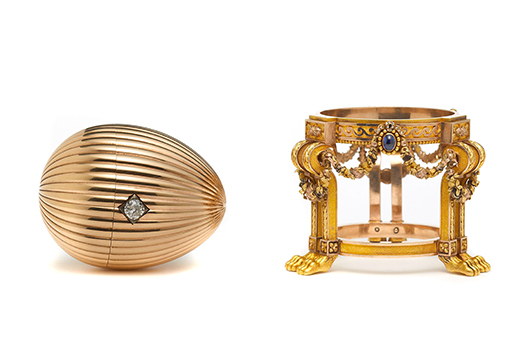 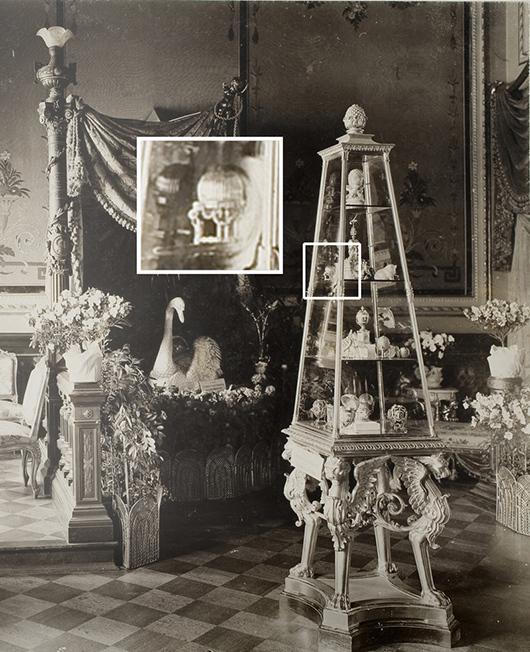 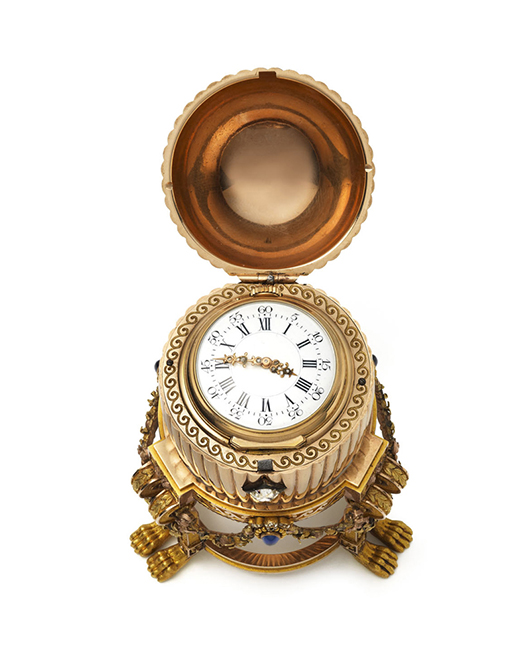