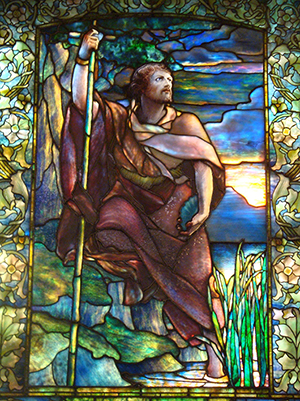 CONNERSVILLE, Ind. (AP) – Evidence of some flaking coming from a more than a century-old stained-glass window at Central Christian Church has resulted in a major project to protect the brilliance and beauty for another century.

Bovard Studio from Iowa has been at the church for nearly two weeks, installing aluminum framing for a protective covering on the big window to the south and fixing some of the smaller stained-glass windows as well, the Connersville News-Examiner reported.

Jim Powell, president of the church board, said there is no mention of the stained-glass windows in the church history materials, and no one knows the cost or why the designs were chosen. No plaques were placed on the window frames.

“We were discussing replacing windows in the secretary’s and minister’s offices and were ready to sign a contract last spring when Howard Price, chair of the Buildings and Grounds Committee, happened to look up at the big south window and he saw white flakes at the bottom,” Powell recalled. “It turns out that was glazing so at that point we decided to back off the office windows.”

The windows had some renovation 19 years ago, he said.

The board then interviewed three companies and Bovard was chosen for the project. Bovard received a contract in September and they had hoped to do it in the fall but could not make it.

The congregation was very generous with donations to a fundraiser to repair the windows, he added. They are behind the project, which has made it go smoothly.

Project supervisor Chris Dieter said the project had been scheduled to start Jan. 6, which was the day of snow and sub-zero temperatures, so the team did not come until Jan. 8. The three-man crew was to leave over the weekend and have a week at home before returning to complete the job, which is the cycle of work – two weeks on the road and one week at home.

Bovard Studio in Fairfield, Iowa, is one of a handful of companies in the country that can do a project the size of the Central Church windows, he said. The company not only can repair frames and install protective coverings on site, it can dismantle and reassemble stained-glass windows or build new stained-glass windows.

Dieter believed the stained-glass for the church was likely made at a facility in Kokomo, Ind.,which makes stained-glass for other companies to assemble. Artists then paint the designs on the glass for more intricate works.

In Connersville, the project includes new protective coverings, similar to storm windows, on the big south window, along with three smaller windows under that large window in addition to the small windows under the other two large stained-glass windows.

“There was some bulging on the big one so I’m going to check the others for bulging,” Dieter said. “I found wood rot in the one we’re on. It was not original wood so someone has done repairs to it. That has been replaced.”

Most churches have their stained-glass and then another layer on the exterior, he said. The Central Christian job uses a quarter-inch plate glass as the covering, but other churches can choose laminated glass or Lexan plastic that provides more strength but is prone to fade over time.

A normal stained-glass window has a life of about 100 years at which point, the lead may need to be replaced.

The company has done a lot of work in Indiana but has also worked all over the country.

“When I drove through Liberty (Ind.) last Sunday it looked familiar but I can’t remember working there,” Dieter said. “We have done jobs in Muncie and Fort Wayne, and were doing a job there until it got too cold.”

An examination of the west and north stained-glass windows will determine if work is needed to secure them for the future, Powell said.

The window on the north, depicting Jesus and the woman at the well as described in John 4, is an unusual design.

Dieter said there are several churches with Christ knocking on the door, Christ in the temple, holding a lamb or at the nativity, but not with the woman.

“That woman at the well is not a typical design,” he said. “You see other parts of his life but why that? One woman suggested that it might be this church believed woman could be pastors.”

“We take it for granted,” Powell said. “I was baptized here at maybe 8 or 9 years old and I’ve taken it for granted but come to find out from someone that works with churches every day, it’s quite unique.” 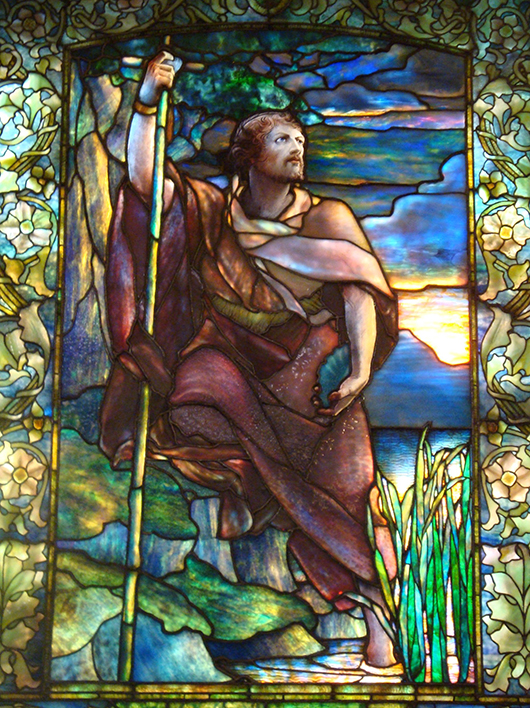