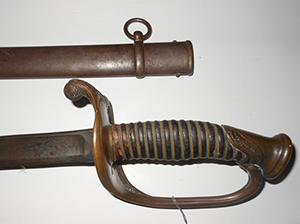 FLORENCE, Ala. (AP) – More light has been shed on the owner of an old Civil War sword stored in a vault in a government building and on the sword itself.

The sword was discovered in the early 1970s when one of Florence’s oldest brick houses was being restored for use as an office. The sword was hidden between the floorboards of the house on Pine Street, wrapped in a cloth. It was later placed in the vault in the License Commissioner’s office in the Florence-Lauderdale Government Building. There it sat in obscurity until a few people took renewed interest in it.

“It is a French-made, cheaper version of the model 1850 U.S. foot officer’s sword,” said Wayne Higgins, curator of Pope’s Tavern museum and a retired history teacher. “The French exported a lot of these to both the North and the South just before the war.”

The sword likely belonged to William F. Karsner. His parents built the Federal cottage in 1828, which was where the sword was found.

Because the sword can be identified with the person who carried it during the war, Higgins said the blade’s value is much higher.

Research done by Lee Freeman, of the Florence-Lauderdale Public Library’s Local History and Genealogy Department, has revealed a wealth of information about Karsner.

Karsner was born in 1831 in Florence, and served as sheriff of Lauderdale County for at least two years, from 1856-58. Freeman learned Karsner moved to Louisville, Ky., where he and two of his younger brothers worked as sales clerks.

When the Civil War began, and Alabama seceded from the Union early in 1861, Karsner returned.

“By April 28, 1861, Karsner was back in Florence, and he enlisted on that date in Irish native and Florence attorney Capt. Robert McFarland’s Company H, 4th Alabama Infantry,” Freeman said. “His name appears in the Florence Gazette roster published on Wednesday, May 1, 1861.”

Karsner was elected third lieutenant of the company.

The unit, then known as the Lauderdale Volunteers, left Florence on April 28, 1861, for Dalton, Ga., Freeman said. On May 7, the unit went to Lynchburg, Va., where they were designated Company H of the 4th Alabama. The 4th Alabama took part in the first major battle of the war, First Manassas, in July.

“The 4th became the first regiment from Alabama to participate in a major battle in this war,” Freeman said.

In fact, the 4th Alabama became one of the most storied regiments of the war, taking part in the Army of Northern Virginia’s battles at Second Manassas, Seven Pines, Sharpsburg, Gettysburg, Chickamauga, The Wilderness and Cold Harbor. Freeman said his research shows Karsner was present for these battles.

He was promoted to captain in July 1862, just two months before being wounded at Sharpsburg. He was later admitted to a hospital in Richmond, Va., in 1864, Freeman said, though the cause is not clear.

Karsner surrendered with the survivors of the 4th Alabama when Gen. Robert E. Lee surrendered the Army of Northern Virginia at Appomattox Courthouse in April 1865.

After the war, Karsner married in Tuscaloosa and settled there for the remainder of his life. He was a farmer and later an auctioneer. He died in 1889.

Higgins believes the sword was hidden under the floorboards to prevent it from being taken by occupying Union troops after the war. He said Confederate weapons and paraphernalia were prized by Union troops, and more importantly, anyone associated with the Confederate army was forbidden to have weapons, he said.

Higgins said one of Karsner’s younger brothers served as a home guard during the war, though he was only a teenager.

Freeman’s research revealed that two other brothers served in the Confederate army. George W. Karsner was a member of Roddey’s 4th Alabama Cavalry, and was captured at Selma in 1865. John S. Karsner was a sergeant in the 16th Alabama Infantry, he said.

Higgins said he would like to have the sword on display at Pope’s Tavern, where the 4th Alabama’s flag is displayed. 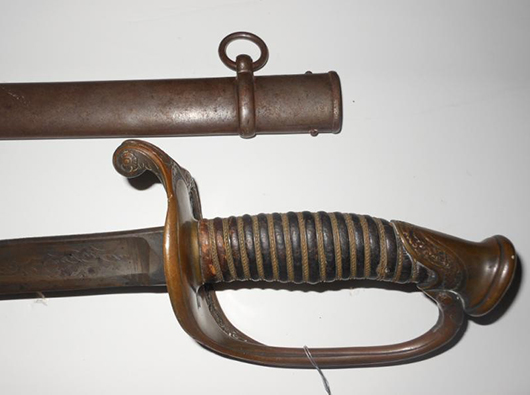