Navajos of the Four Corners area have been making Teec Nos Pos weavings since the early 1900s.
This example features the brilliant colors and bold geometric designs that make this type a favorite.
93½ by 49 inches. Image courtesy Cowan’s Auctions Inc.

From big-city auction houses to remote trading posts, collectors have been searching for textiles of the American Southwest for more than 100 years. 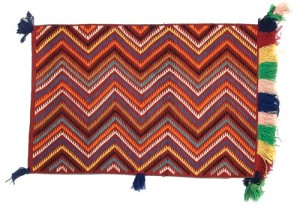 Commercially produced yarn colored brightly using aniline dyes enabled Navajo weavers to create what traders called Eye-Dazzlers. This example (53 by 35 inches), having long looped fringe on the lower edge and sides, was from the Roy Rogers estate. It sold for $4,312.50, more than double the high estimate. Cowan’s Auctions.

The most highly collected and recognized form, the Navajo blanket, has shifted from an outer garment wrapped around the shoulders to a decoration on floors and walls. Hanging a traditional blanket vertically duplicates how it would have looked covering the doorway of a Navajo hogan.

Legend says Spider Woman, the powerful creative deity from the Underworld, taught the Navajo how to weave. Historians believe weaving in the Southwest originated with the ancestors of the Pueblo people. They were already using looms when Spanish explorers arrived. Colonization of New Mexico beginning in 1598 initiated trade between the Spanish and the Pueblo. Increasingly oppressive Spanish rule sparked a deadly revolt in 1680. When the Spanish reconquered the territory in 1692, many Pueblos took refuge in the Navajo lands.

The Pueblos taught Navajo women loom weaving, a technical art that takes years of practice to learn. Having acquired sheep from the Pueblo and Spanish, the Navajo have traditionally used wool for their textiles. Finely woven Navajo blankets were famous for their ability to shed water. While Pueblo weaving has always been for Indian use, the Navajo traded their textiles with other Indians and Anglos. 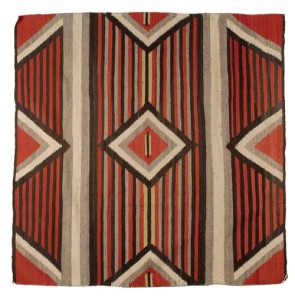 A central diamond surrounded by eight triangular elements at the edges creates a distinctive image that has made the Third Phase blankets the best-known Navajo weavings. This chief blanket (58¼ inches square) is woven of native handspun wool colored with natural and aniline dyes. It sold for $1,955. Cowan’s Auctions Inc.

Opening of the Santa Fe Trail in 1822 and acquisition of the territory by the United States in 1848 resulted in increased recognition of Navajo weaving. Walk in Beauty: The Navajo and Their Blankets by Anthony Berlant and Mary Hunt Kahlenberg (1977, Little Brown & Co.) states that in 1849, when Lt. James Simpson led the first official U.S. expedition into Navajo country, he noted in his journal that the Navajo people made what were “probably the best blankets in the world.”

While economic conditions and changing lifestyles of the Navajo people have affected the progression of their art form, demand for it grows. Auctioneers regularly schedule sales highlighting woven textiles within the greater category of American-Indian art.

The Cincinnati auction house Cowan’s made a big impact on the future market for American Indian weavings in 2002 when they sold a collection deaccessioned by the Western Reserve Historical Society. Among the items sold at that auction was a Classic Period Navajo child’s wearing blanket (46 by 31½ inches) that sold for $48,300. A Navajo Third Phase chief blanket (67 by 55 inches) sold for $26,450. Both textiles had once belonged to a U.S. Army cavalry officer who was stationed in the West in the late 1860s.

While museum-quality pieces from the 19th century like these are scarce, later weavings are readily available and more affordable to collectors and decorators. 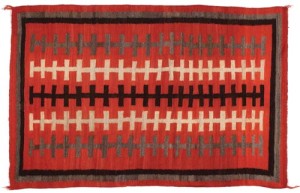 Western Reservation refers to the remote western region of the Navajo Nation in northern Arizona. “Railroad tracks” on a vibrant red ground run the length of this Western Reservation weaving (80 by 52½ inches). It sold within estimate for $2,300. Cowan’s Auctions Inc.

“I think they are terrific decorating pieces. They don’t go out of style,” said Danica M. Farnand, Cowan’s American Indian Arts specialist. “If you have an Arts & Crafts or Prairie-style house, they’re perfect for that. There is a lot of work and craftsmanship that goes into them, and people understand and respect that. I think, in general, they are timeless pieces.”

Americans have long held an appreciation for Indian and art, which became widely accessible in the first half of the 20th century. “People tend to use the more contemporary pieces to decorate their homes,” said Farnand. “During the 1920s, ’30s and ’40s there was a lot of travel out West, and during that period people could bring these weavings home because they were easy to transport. So there are many blankets from that time frame, and people use them for decorating. People can decorate with the older pieces, but they tend to bring more money because earlier and rarer.” 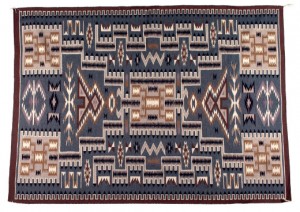 A Two Grey Hills interpretation of the Storm pattern, consisting of a central rectangle with four lines extending from its corners to four rectangles at the corners of the weaving, has been a popular Navaho design since the early 1900s. Image courtesy Cowan’s Auctions Inc.

Ron Munn of R.G. Munn Auction, Cloudcroft, N.M., who has been selling American-Indian textiles for 40 years, sees a constant demand for these pieces. “Looking back to the 1920s, the first heyday of the popularizing of Navajo textiles, wealthy people – industrialists, business owners and professionals – collected them. It was not uncommon to see a picture of a Victorian home that would have five or six Persian carpets on the floor and there were two or three Navajo rugs mixed in with them. People bought them for their aesthetic beauty as well as the fact that they are an important part of American culture,” said Munn.

Munn said collectors evaluating a weaving look for the caliber of the weave, the visual impact of the design and the technical difficulty to create it. A good example is the Teec Nos Pos style developed by weavers from the Four Corners area where Utah, Colorado, New Mexico and Arizona meet, said Munn. “Teec Nos Pos is a multicolored weaving. Almost all the design elements are outlined in a different color. The technical expertise to weave that rug is staggering. They are in great demand right now,” he said.

Another important factor in evaluating post-Classic period Navajo textiles is whether the weaving is done using native handspun wool, which is generally more desirable than a comparable piece woven with commercial machine-spun yarn.

“Collectors evaluating a weaving look for the caliber of the weave, the visual impact of the design and the technical difficulty to create it.”

“It took a Navajo three times as long to drop-spin the wool, dye it and prepare it than to go down to the local trading post to buy three skeins of commercial yarn,” said Munn. “There are a lot of 1950s weavings that are of commercial yarn, and that drastically affects the value (downward).” Munn emphasized he was not referring to those Classic Period Navajo blankets made of machine-spun yarn.

Following their surrender to Kit Carson in January 1864, more than 8,000 Navajo men, women and children were forced from their homeland and made to endure internment near Bosque Redondo, N.M. Deprived of their flocks, Navajo weavers were introduced to machine-spun yarn produced in Germantown (Philadelphia), Pa. Blankets made from these yarns are called Germantowns. Over the years the term Germantown has come to mean any three- or four-ply machine-spun yarns from any Eastern mill. 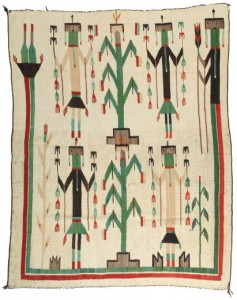 Ye’ii figures (Navajo holy persons or deities) were not depicted on textiles until after 1900. Corn Ye’iis are flanked by female Ye’iis on this weaving (58 by 50 inches) of native hand-spun wool in vegetal green and aniline dyes. Image courtesy Cowan’s Auctions Inc.

After signing a peace treaty, the Navajo were allowed to return to their homeland in 1868, but their way of life was forever changed.

Another factor in evaluating American Indian textiles is the color: natural wool, vegetal or factory-made aniline dyes, or a combination of these. Munn said tastes change in this regard. Currently buyers prefer a brighter palette. “Ten years ago the vegetal-dye weavings – Chinle, Wide Ruins and Crystal – were on the crest of a wave. Today that market is somewhat slow, even though it takes a weaver twice as long to make an all vegetal-dyed homespun rug,” said Munn.

The cryptic names that have been given to styles of Navaho weavings often denote the town or trading post where they originated. Examples are Crystal, N.M., and Ganado, Ariz. Weavings whose place of origin cannot be pinpointed are often identified by region, such as Western Reservation in Arizona.

Munn advises buyers that reproductions are being made on mechanical looms in Mexico. “In many cases if it’s well done, from the back of the auction room you cannot tell whether it’s Navajo or Mexican. There are also a great deal of textiles now being done with traditional Navajo designs in Pakistan and other foreign countries,” said Munn. His advice to newcomers is buy from knowledgeable dealers and auctioneers who guarantee what they sell.

He also recommends learning as much as possible about the many styles, weaving techniques and materials. “Part of the fun of collecting is the learning process. When another collector tells you, ‘Oh, you shouldn’t have passed on that – it was a good buy,’ all of a sudden you realize you had better learn more,” said Munn.

CHINLE Developed in the 1930s in the Canyon de Chelly region of northeastern Arizona and named after the town nearby, this modern classic style is now woven across the Navajo reservation. Chinle weavings are typically borderless and char-acterized by alternating plain stripes with horizontal bands of geometric designs. Colors most often are pastel or earth tones, but they can also be bright colors.

CRYSTAL Navajos on the western side of the Chuska Mountains near Crystal, N.M., began supplying textiles for John B. Moore’s mail-order catalogs in the early 1900s. These old-style Crystal weavings featuring bordered designs with geo-metric patterns later influenced the work of the Two Grey Hills weavers on the other side of the moun-tains. Since the late 1930s Crystal textiles have been know for having golden tones and horizontal bands that include “wavy” lines. Colors are usually muted earth tones, but may include pastels and pinks.

GANADO This famous style originated at the trading post near Ganado, Ariz., where owner Juan Lorenzo Hubbell began trading with Navajos in the late 1870s. He was influential in the development of the weaving style in that area and encour-aged the weavers to improve the quality of their textiles. He preferred natural wool colors and deep aniline dyed red. The National Park Service has run the Hubbell Trading Post National Historic Site since 1967.

KLAGETOH Meaning “Hidden Springs,” Klagetoh is a community south of Ganado on the Navajo Reservation in northeast Arizona. Though Ganado and Klagetoh weavings typically have sim-ilar central diamond motifs, these from the latter have a predominantly gray background.

TEEC NOS POS Named for a settlement in northeast Arizona, Teec Nos Pos textiles have been produced by Navajo people living around the Four Corners area. Since the turn of the 20th cen-tury these boldly colored textiles have exhibited Persian rug design influences elements including a central design element and a wide border.