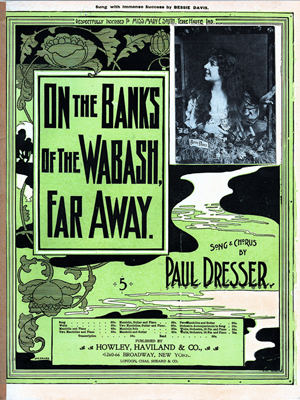 Sheet music for Paul Dresser’s song ‘On the Banks of the Wabash, Far Away.’ Image modified by Papa Lima Whiskey. Permission is granted to copy, distribute and/or modify this document under the terms of the GNU Free Documentation License, Version 1.2.

TERRE HAUTE, Ind. (AP) – Two historical treasures are neatly displayed in the home of one local resident. On Sunday, the owner opened the doors to his southeastern Vigo County home to share the unique story.

About five years ago, John Mutchner was browsing through the collection of an antiques shop in Indianapolis, aiming to find political memorabilia. But what he ended up buying, at the cost of $25, if he remembers correctly, he said, is one of significance to many Hauteans.

He stumbled upon original sheet music to Paul Dresser’s On the Banks of the Wabash, Far Away, the Indiana state song.

“I don’t know why I stuck my hand down there and started going through sheet music and all of a sudden, I came across this,” Mutchner told the Tribune-Star as he pointed to the framed music sheet on display at the top of the staircase. Those who take the stairs up to the second floor can easily spot the music sheet, which features the complete song and a photo of a young Dresser. It was protected by a frame, which also held words and music to another one of Dresser’s compositions, The Path That Leads The Other Way.

Mutchner, the legendary former basketball coach at Rose-Hulman Institute of Technology and former leader of the nonprofit Wabash River Development and Beautification – known around town as Riverscape – was surprised by his discovery, which he immediately recognized to have “special meaning to people in Indiana.”

But Mutchner was equally intrigued by three loose sheets of paper, containing a handwritten poem, that he found tucked inside the sheet music.

“It was just folded up inside the music,” Mutchner described. “The words are to the music of On the Banks of the Wabash, Far Away but it’s about the Spanish-American War and the sinking of the (Battleship) Maine.”

He was struck by its historical significance and the story it tells of the ship’s sinking and the nation mourning.

“It is historically significant and beautifully written,” Mutchner said.

The poem was titled, On the Shores of Havana, Far Away. Several academic sources, including the New York Public Library and Johns Hopkins University, have a record of it. Its full title is On the Shores of Havana, Far Away. A Paraphrase to the Melody of the Famous Song On the Banks of the Wabash, Far Away. In addition to listing Dresser as the music composer, it lists Andrew B. Sterling (1874-1955), as the lyricist.

Mutchner said he does not know who physically wrote the lyrics on the loose sheets.

According to the Indiana Historical Society, Dresser was born in Terre Haute on April 22, 1858, with the name Johann Paul Dreiser Jr. His father initially hoped he would become a priest, but after two years in the seminary, he decided priesthood was not for him. He later moved to New York and in the period between 1886 and 1893, he composed nearly 50 songs, according to the society’s website.

“On the Banks of the Wabash, Far Away had brought Dresser the kind of acclaim, financial reward and reputation that few popular-song composers before him had ever enjoyed,” the Indiana Historical Society stated on its website. “Within a year Dresser reported that Wabash had broken all sales records and that the million mark would soon be passed …” it later added.

The song generated more than $100,000 from sheet-music revenues, another website stated.

Through the ballad, Dresser reflected on his hometown and the river that runs through it. In 1913, the Indiana General Assembly adopted it as the official state song.

The Indiana Historical Society also lists some of Dresser’s famous songs including The Letter That Never Came (1886), I Believe It For My Mother Told Me So (1887), The Pardon That Came Too Late (1891), A Dream of My Boyhood’s Days, and The Path That Leads the Other Way.

During Dresser’s lifetime and “heyday,” the Spanish-American War broke out. The war was precipitated by the explosion and sinking of the Maine in 1898. The war was preceded by three years of fighting by Cuban revolutionaries to gain independence from Spain’s colonial rule, according to the U.S. Department of State.

“U.S. victory in the war produced a peace treaty that compelled the Spanish to relinquish claims on Cuba, and to cede sovereignty over Guam, Puerto Rico and the Philippines to the United States,” according to the State Department.

“Capitalizing on the Spanish-American War, which united many former Civil War enemies under one flag, Dresser wrote the popular successes We Are Coming, Cuba, Coming, Your God Comes First, Your Country Next, Then Mother Dear, Come Home, Dewey, We Won’t Do a Thing to You, among other songs, according to the Indiana Historical Society.

The celebrated songwriter was honored last week in Terre Haute with the dedication of a bronze sculpture erected next to his boyhood home, located at the entrance of Fairbanks Park. The artwork, called A Song for Indiana, also honors the Wabash River and the state song.

Because of the recent dedication, Mutchner thought it was timely to share the historical pieces in his collection.

“I have this all framed and put together,” he said of the pieces, which are hung alongside other pieces related to the history of Terre Haute. “It’s just been hanging here on the wall.” 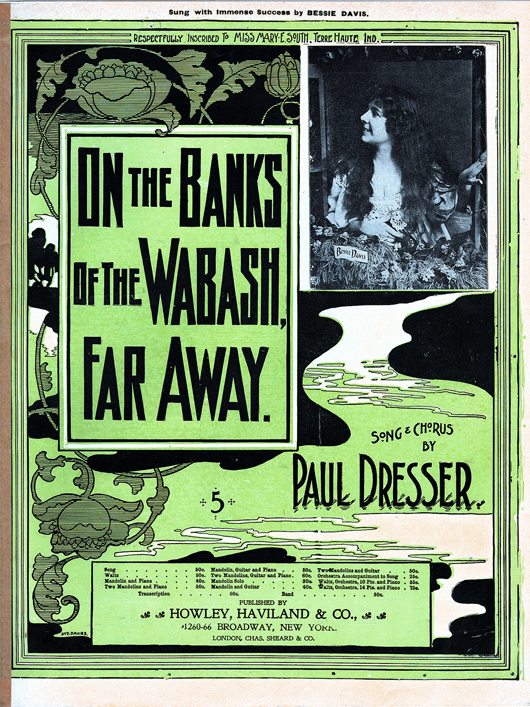 Sheet music for Paul Dresser’s song ‘On the Banks of the Wabash, Far Away.’ Image modified by Papa Lima Whiskey. Permission is granted to copy, distribute and/or modify this document under the terms of the GNU Free Documentation License, Version 1.2.