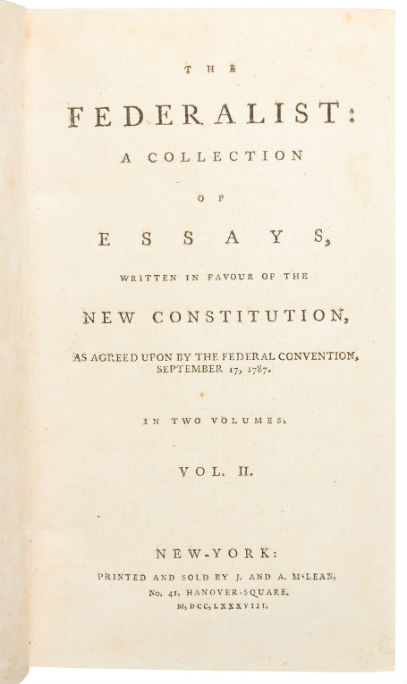 Only a few instances of minor foxing are noted within the book, which is overall very clean and fine. PBA Galleries image

SAN FRANCISCO – PBA Galleries will offer an exceptional, complete copy of the 1788 first edition of The Federalist at their May 31 Americana auction. The Federalist is the single most important book published in North America with this copy being exceptionally clean, a rare example printed on thick super fine royal writing paper.

The first edition of the seminal work on American political theory and a cornerstone of American constitutional governance, called by Wright Howes, “the most famous and influential American political work.” Only 500 copies of the first edition were printed, and the present copy is one of the exceptionally rare examples printed on thick royal writing paper. These copies were advertised by the publisher M’Lean in contemporary periodicals as the more deluxe version of this seminal document: “A few copies will be printed on superfine royal writing paper, price ten shillings.”

The importance of The Federalist to the early development of the great political experiment that was the United States cannot be overstated. The work comprised 85 political essays, all but the last eight of which were first published in newspapers in New York, in an effort to convince New York to approve the Federalist Constitution.

Alexander Hamilton wrote 51 of the essays, James Madison 14, and John Jay five; the authorship of 15 of the essays is in dispute between Hamilton and Madison. They were all published under the pseudonym “Publius.” The first 36 numbers of The Federalist were here published in book form in March 1788, with the remaining 49, together with the text of the Constitution, in May of that year.

Upon its publication, George Washington noted to Alexander Hamilton that the work “will merit the Notice of Posterity; because in it are candidly and ably discussed the principles of freedom and the topics of government, which will always be interesting to mankind” (George Washington, letter to Hamilton, Aug. 28, 1788).

The complete entry and multiple images can be viewed online at  http://www.pbagalleries.com/content/2018/04/12/first-complete-edition-of-the-federalist-papers-in-book-form/.