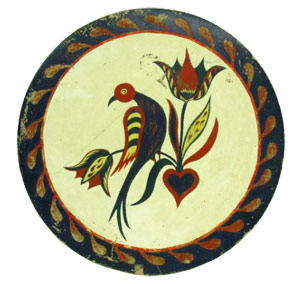 KUTZTOWN, Pa. (AP) – At first, Patrick J. Donmoyer photographed only the hex signs that he found interesting.
Now, he’s interested in all of them.

What used to be a hobby has grown into a quest to document every hex sign, or barn star, in Berks County.

“I’m literally going down every single road that is in Berks County,” said Donmoyer, a Kutztown University student.
Donmoyer has collected 2,400 photographs of nearly 350 hex signs, some of which may not have been documented before.
Perhaps most impressive, and most inspiring to other scholars of this 19th century form of folk art, is that Donmoyer has shown such enthusiasm and he’s only 22.

“It’s getting young blood into this,” said Eric A. Claypoole of Greenwich Township, a painter who has reproduced hex signs on barns for more than two decades. “It keeps the tradition going.”

Robert F. Ensminger, 81, of Bethlehem, who has studied barn architecture for 30 years, calls Donmoyer an expert on hex signs, quite a title for a college student.

Dr. Robert W. Reynolds, the executive director of the Pennsylvania German Cultural Heritage Center, agrees. “I think he knows as much as anybody alive about hex signs,” Reynolds said.

Fifty to 100 years from now, Donmoyer’s research could be the definitive source on hex signs that existed in Berks, Reynolds said.

Hex signs, or circular motifs painted on buildings, vary in color and design. They first showed up at Berks County farms about 1820, Donmoyer said, adding that many people now consider them part of the landscape.

When asked if any of his 20-something peers share his passion for barn art, Donmoyer grinned. “A lot of people don’t know anything about them or have no interest in them,” he said.

The Kutztown University senior is working toward two bachelor’s degrees: one in fine arts and one in weaving and textiles. He also minors in Pennsylvania German studies.

Two years ago, he casually began photographing hex signs because he liked their abstract designs.
“My initial interest (originated from) driving around this area and seeing so many of them and not really knowing what to make of them,” he said.

Ultimately, Donmoyer aims to create a database of hex signs that would be publicly accessible at the Pennsylvania German Cultural Heritage Center at Kutztown University.

He also wants to create an online interactive map of Berks County that people could use to locate hex signs. While interning at the heritage center this summer, Donmoyer set out to see all of Berks County’s hex signs. His studies, supported by the Peter Wentz Farmstead Society’s Gamon Scholarship, will satisfy his honors thesis.

“I think it’s really important that hex signs are documented because they are disappearing every week,” Reynolds said, explaining that many have been covered by siding or paint.

“We have this collection that’s slowly diminishing, and it’s really important to document what we’ve got now,” he added.
Ensminger, too, thinks Donmoyer’s work will help preserve what he calls the last surviving form of Pennsylvania German folk art.

Plus, Ensminger said, “He (Donmoyer) is going around and talking to every farmer … and is going to encourage them to have their barns repainted and their signs preserved.”

Eventually, Donmoyer would like to branch out and research hex signs in other parts of southeastern Pennsylvania.
“I think there’s a good potential for an expansion of our understanding of these symbols,” he said. “There is a lot to discover.”

Gettysburg group pitches in to save historic Pa. barns