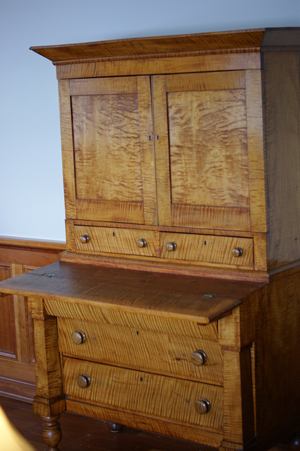 The profusion of tiger maple in this desk is an indication it was made for a special customer – a future U.S. president. Image by Ryan E. Hulse, courtesy of Franklin Pierce University.

RINDGE, N.H. (AP) – A desk that President Franklin Pierce gave to a family friend after his election has made its way back to New Hampshire.

The Empire tiger-maple desk, built in the 1830s, originally sat in Pierce’s law office in Concord and was given to a friend who lived nearby when Pierce was elected president in 1852.

It changed hands over the years, traveling to Massachusetts and Rhode Island before a Connecticut businessman purchased it at an auction. Paul Rotondo, of Norwalk, Conn., attended what was then Franklin Pierce College in the 1980s and decided to donate the desk to his alma mater.

The desk now sits in the president’s office at Franklin Pierce University in Rindge.

When Pierce departed for Washington in the 1830s, he left behind his valuable tiger-maple desk and other large items, as his career as a congressman, U.S. senator and general in the Mexican-American War took him far from home, and ultimately to the White House. After being elected president in 1852, he gave the unique desk to a family friend, Charles Norton, who lived near his law office.

This month, the desk from which the 14th U.S. president launched his early political career has made it back home to New Hampshire, donated to the university that bears the name of the only U.S. president from that state. Franklin Pierce University has received the desk as a gift from Rontondo. who located the well-preserved tiger-maple desk in an antique auction in Rhode Island last year.

Rotondo, a Norwalk, Conn., entrepreneur and business consultant who attended then-Franklin Pierce College in the 1980s and his friend and colleague, Janet Mastrondari, won the stunning piece at auction. The Empire desk came with a documented provenance – which includes correspondences, newspaper articles, letters of authentication and other documentation confirming the desk’s authenticity.

“Attorney Janet Mastronardi, who specializes in antiques, called to let me know about the desk,” he said.

She recalled that Rotondo had gone to Franklin Pierce and thought that he would be interested in the piece. “Being a beautiful unique piece that once belonged to our 14th president and was made locally in New Hampshire and was being sold with documentation authenticating its ownership,” he said his interest was piqued. “It was not only in great condition, but also included documentation that traced its prior ownership to President Pierce when he worked as an attorney.”

The collection of documents reveals much about the desk’s ownership; it was used in the office of a New Hampshire harness maker for many years, was later owned by a Leominster, Mass. family, and ultimately made its way south to Cranston, R.I., during the early 20th Century.

While the documents describe the desk as a local piece, built in the Concord area in the early 1830s, the identity of its builder remains a mystery. “What stands out about this piece is the quality of wood chosen for its construction,” said Rotondo, who also consults in antique appraisal. “Typically, the furniture makers in those days would reserve the more ornate woods for special customers,” he said, “and the quality of the large amount of tiger maple selected for this particular desk shows that [Franklin Pierce] was a customer whom they valued highly.”

The wood selection of the desk is noted in an Aug. 22, 1971 newspaper column in The Providence Sunday Journal, which stated that the large tiger and curly maple pieces used to make the desk “would probably be unobtainable today, and even when this desk was made had to be selected from the log and then painstakingly sliced out.”

The desk has found a home in the president’s office on campus at Franklin Pierce University, a private university founded in 1962, where it closely matches the design of the room. “It is already proving to be a great conversation piece,” said Dr. James F. Birge, the university’s president, “and we are very happy to have received it as a donation.”

Birge noted that Rotondo was a history major during his student days. “We are thankful for his life-long appreciation of history and grateful that he helped return this unique piece to Franklin Pierce.” In the months ahead, he says, the desk will be moved to other parts of campus from time to time, including the lobby of Peterson Hall and perhaps eventually the university library. “It is really quite an impressive example of New Hampshire craftsmanship and U.S. history, and we would like everyone to be able to see it and reflect on its legacy and significance to our campus community.” 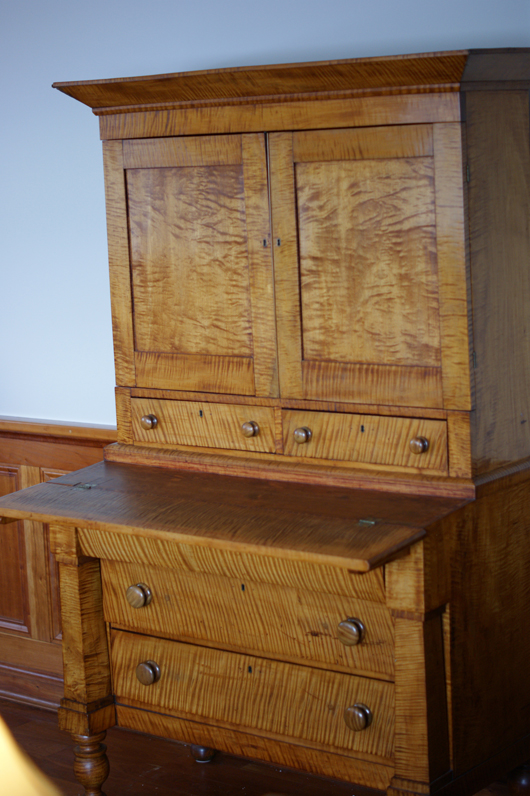 The profusion of tiger maple in this desk is an indication it was made for a special customer – a future U.S. president. Image by Ryan E. Hulse, courtesy of Franklin Pierce University. 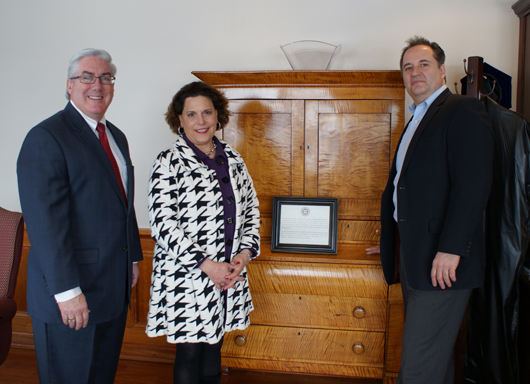