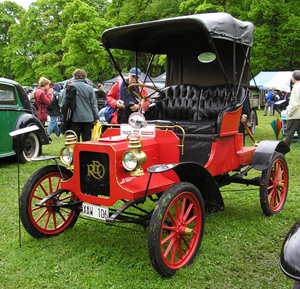 A 1906 REO Runabout. This file is licensed under the Creative Commons Attribution-Share Alike 3.0 Unported license.

Kidle is in the twilight years of his long love affair with old fine old cars. He was especially fond of REOs that were built in nearby Lansing until the mid-1930s.

“The reason I’m getting rid of them is because I can’t drive them anymore,” says the 83-year-old retired dentist as he pauses in the paneled garage behind his house that’s decorated with photographs and advertisements of automotive brands that are now extinct.

The gleaming red Runabout—one of the oldest REOs known to exist—has already been sold. Kidle says he will deliver it to the new owner this summer.

“It’s going to a gentleman in New York, it’s going to be in a museum,” says Kidle, who rescued the car from a barn in Benkelman, Neb., and had it restored to showroom condition. “I sold it to him two years ago and told him he could have it in the next five years.”

Earlier this year, Kidle sold a 1914 REO to a fellow dentist and member of the REO Club of America. Next on his list is the stately Cadillac that Kidle has been restoring since he bought it 20 years ago.

The Cadillac was originally purchased by John and Mary Phillips, a wealthy Jackson family with 10 children, he says.

With room for three, the Cadillac was purchased for Mary Phillips to drive. After her death, it was stored by one of their daughters in a barn in Dowagiac, Mich., where its wooden subframe rotted beneath its aluminum body until Kidle rescued it.

Over the years, Kidle has hired craftsmen to replace the wooden subframe and hand-form key parts of its aluminum body. He’s also restored the original four-cylinder engine and chassis.

Steve Sturim, owner of Steve’s Antique Auto Repair in Wyoming, Mich., says Kidle’s coupe is one of only three known to still exist and one of only 50 made in 1913.

The Landaulets were known as “tulip cars” because of the unique shape of their bodies, Sturim says.

“There are no flat panels on them. Those are aluminum hand-formed bodies that were actually done by the two Fisher Brothers that started Fisher Body,” says Sturim, who worked on the drivetrain and helped Kidle find the craftsmen to rebuild the car.

“As far as we’re aware, the car has never been outside the state of Michigan,” says Sturim, whose shop is filled with restoration projects. One of his projects recently set a new speed record for vintage cars.

Sturim says he admires Kidle’s passion for finding and restoring old cars. “He loves his REOs and he loves his old cars,” he says. “His passion has taken him all over the country touring in these vehicles.”

Kidle enjoys showing off the car’s unique features—a three-piece windshield, a built-in tire pump, an internal wiring system that travels through the doors and the unique steering column and seating arrangement that accommodated the 4-foot 9-inch-tall Mary Phillips.

So far, Kidle says he has not actively sought buyers for the Cadillac. “I’m interested that it goes to the right place,” he says. “I would rather see it go to a museum.”

Kidle intends to keep his 1933 REO, a handsome sedan that he found in Illinois and had restored. It came equipped with an automatic transmission and a six-cylinder engine.

“This was considered a very modern car,” Kidle says. Despite its modern appointments, Kidle notes it’s the last model to feature wood-spoked wheels.

Although REO continued making trucks into the mid-1970s, it stopped making cars in 1935.

On the wall of his garage, Kidle has hung a photograph of President Theodore Roosevelt riding in a 1907 REO during a visit to Lansing. He has another poster of the sprawling REO factory in Lansing during its heyday.

“It was a real good company,” he says wistfully. 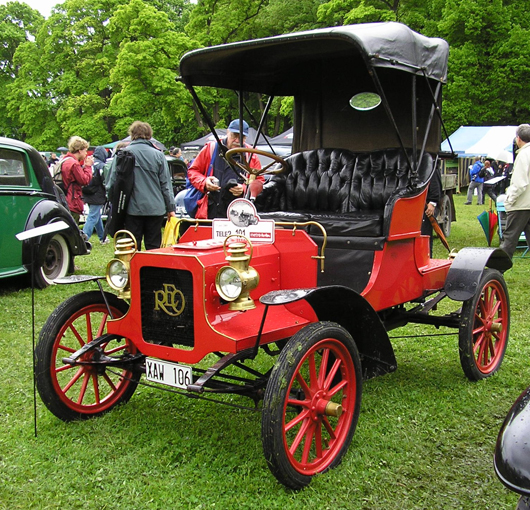 A 1906 REO Runabout. This file is licensed under the Creative Commons Attribution-Share Alike 3.0 Unported license.