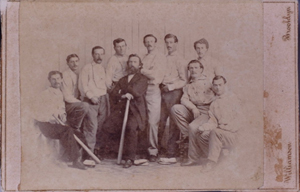 PORTLAND (AP) — Six-figure bids are expected when an auction house sells a rare 148-year-old baseball card that was discovered at a yard sale in rural Maine, the auction house manager said Wednesday.

A man found the card by chance in a photo album he bought while antique picking in the small town of Baileyville on the Canadian border, said Troy Thibodeau of Saco River Auction Co. in Biddeford.

It’s not the same as a modern baseball card, which became commonplace beginning in the 1880s. Instead, it’s an original photograph from 1865 of the Brooklyn Atlantics amateur baseball club mounted on a card. The card shows nine players gathered around their manager.

Thibodeau said he’s aware of only two such cards in existence, the other at the Library of Congress. Putting a dollar-figure value on it is difficult, he said, but he expects it to fetch at least $100,000 at the Feb. 6 auction. LiveAuctioneers.com will provide the Internet live bidding for the sale, enabling bidders from throughout the world to vie for the rare card.

“There hasn’t been another one that’s sold,” he said. “When there are only two known in the world, what’s it worth?”

The Library of Congress has had another copy of the Brooklyn Atlantics photograph since the late 1800s, when it took possession of it from a New York court where the photographer, Charles Williamson, had submitted it for copyright.

In its book “Baseball Americana,” the Library of Congress calls it the first dated baseball card, handed out to supporters and opposing teams in a gesture of bravado from the brash Brooklynites, who were dominant and won their league championships in 1861, 1864 and 1865.

It’s not known how many were produced, but the Library of Congress is aware of only the two copies. A trading card grading firm, Sportscard Guaranty LLC, has authenticated the card as the real thing, said Bob Luce, senior grader at the New Jersey company.

The Maine man bought the card by happenstance. While at a yard sale, he bought a photo album, old Coca-Cola bottles and a couple of oak chairs for less than $100, Thibodeau said.

While looking through the album, the buyer came across the baseball card. He later mailed it to Saco River Auction, having read about the auction house’s sale of the 1888 card last summer. Thibodeau did not release the man’s name, saying he did not want to be identified.

The rarest card around came from a 1923 promotional set of 30 cards, each with a black-and-white likeness of Babe Ruth, Ty Cobb, or some other baseball star. The cards were distributed by the Maple Crispette Candy Co. in Canada, and the person who collected all 30 could claim a prize, said Jim Gates, librarian at the National Baseball Hall of Fame in Cooperstown, N.Y.

But only one Casey Stengel card was produced among the entire bunch, Gates said, and that card is located in the Hall of Fame archives. 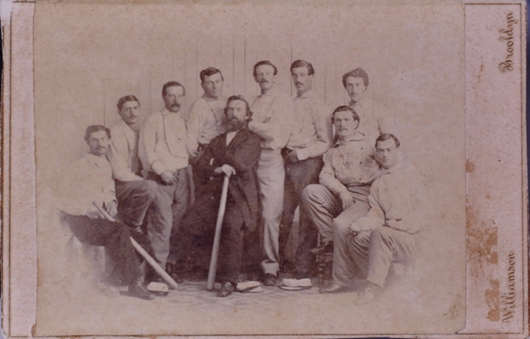 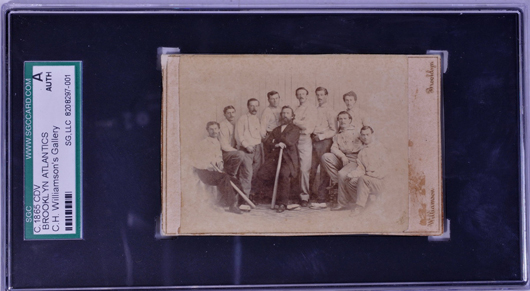 The card in its protective casing. Image courtesy of Saco River Auction Co.

Art Market Italy: The Year of Italian culture in the US
Scroll to top