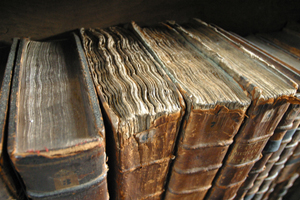 SHREWSBURY, Mass. (AP) – At Green Dragon Bindery, C. Allan “Skip” Carpenter Jr. presides over a Renaissance-style guild of artisans who painstakingly preserve the history and wisdom of the past.

Since 1965, his Shrewsbury business has earned an international reputation for restoring and conserving “all manner of bound and printed material,” including old books, maps, documents and even globes.

In a downstairs shop, cousins Wesley and Christine Carpenter call for help moving a faded 17th century map of England and Wales to a table for cleaning and repairs.

Resembling a mix between Henry Ford’s and Santa’s workshops, the bindery is packed with century-old presses, specialized tools, a World War II army sink for cleaning maps, paint, paste and a safe with no combination.

A trim, bearded man wearing suspenders, the 79-year-old Carpenter followed a winding path to open his bindery, housed in a two-floor shop he built on Boylston Street.

He studied physics and electrical engineering at the University of Miami, served as chief engineer on a U.S. Navy landing ship tank vessel in the 1950s, taught industrial arts in Stow for 12 years and sold and restored antiques.

“I took some school books apart and put them back together,” recalled Carpenter. “I started doing it and basically taught myself. It just mushroomed.”

He chose the name Green Dragon from a child’s watercolor that had passed through his antique store.

Over the decades, Carpenter hired a team of five variously skilled artisans who share some book restoration tasks but have developed specialized techniques for conserving maps, documents and globes.

In a busy field beset by deadlines, he’s proud of earning a reputation for delivering projects within a promised 10 to 12 weeks.

Now 79, Carpenter doesn’t plan on expanding his business even if there’s a market for it.

“I don’t want any more people,” he said. “Then it becomes big business and that means big problems.”

Like the books they preserve, each employee has his or her own story.

A former anthropology and art student who studies Japanese swordsmanship, Jones observed what he and the others do “is really both a craft and art.”

“The main things each of us do are arts-skilled. Sometimes, it’s in line with being a carpenter who takes apart and mends things,” he said. “You have to be an artist to see the patterns. You have to have the ability to duplicate the feeling of the original work.”

The newest employee who came to the bindery in 2006, McDaniel repairs books and makes jewelry in her spare time. A Hardwick resident, she studied graphic design and bookmaking at UMass and “just fell in love with it.”

When conserving a damaged old book, McDaniel said, “Whenever possible, we save the original and do our best to replicate what we can’t. We want the book to be useful so the owner can read it and not just look at it,” she said.

“I feel it’s a privilege to be preserving history. To my dismay, books are going by the wayside. I don’t take them for granted,” she said. “It’s like a new, Old World job that nobody’s doing. That’s why I’m glad I have it.”

A burly man with long blonde hair, Herbert brushes paste onto the spine of a damaged book with brisk, sure strokes.

After studying commercial art, he was supporting himself as a woodworker when he asked Carpenter to teach him bookbinding.

“It was like joining a guild. I made a verbal agreement to work here five years and he’d teach me the business,” said Herbert.

Entering the first-floor workshop after working on an old map, Wesley Carpenter joked, “My job description hasn’t changed in the last 500 years.”

“Are we Luddites?” he pondered. “There are some people here who’d fit that description.”

Someone asked Wes Carpenter if he could use his mechanical skills to repair a Nook or Kindle. 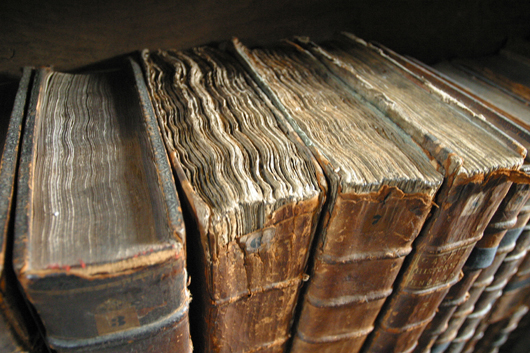