Overbeck pottery commands such a high price at auction, since so few important pieces come on the market.

Working from their modest home in east-central Indiana, this family of artists produced a relatively small, but highly regarded, amount of art pottery in the first quarter of the 20th century.

“Their production of quote-unquote important pieces is rather low in the scheme of things. Yet in spite of that, they have gained a very good name in Arts & Crafts circles. After all, it is really close to as pure an Arts & Crafts pottery as there is because basically it’s all made by hand,” said Don Treadway of Treadway Toomey Galleries. His company regularly sells Overbeck pottery at its auctions in Chicago and Cincinnati, but seldom more than several pieces per year.

“If you wanted to go out and buy or build a large collection of important pieces of Overbeck, it would be very difficult. A large collection would be a dozen pieces,” said Treadway, adding, “In terms of really fine examples, it’s in limited supply.” 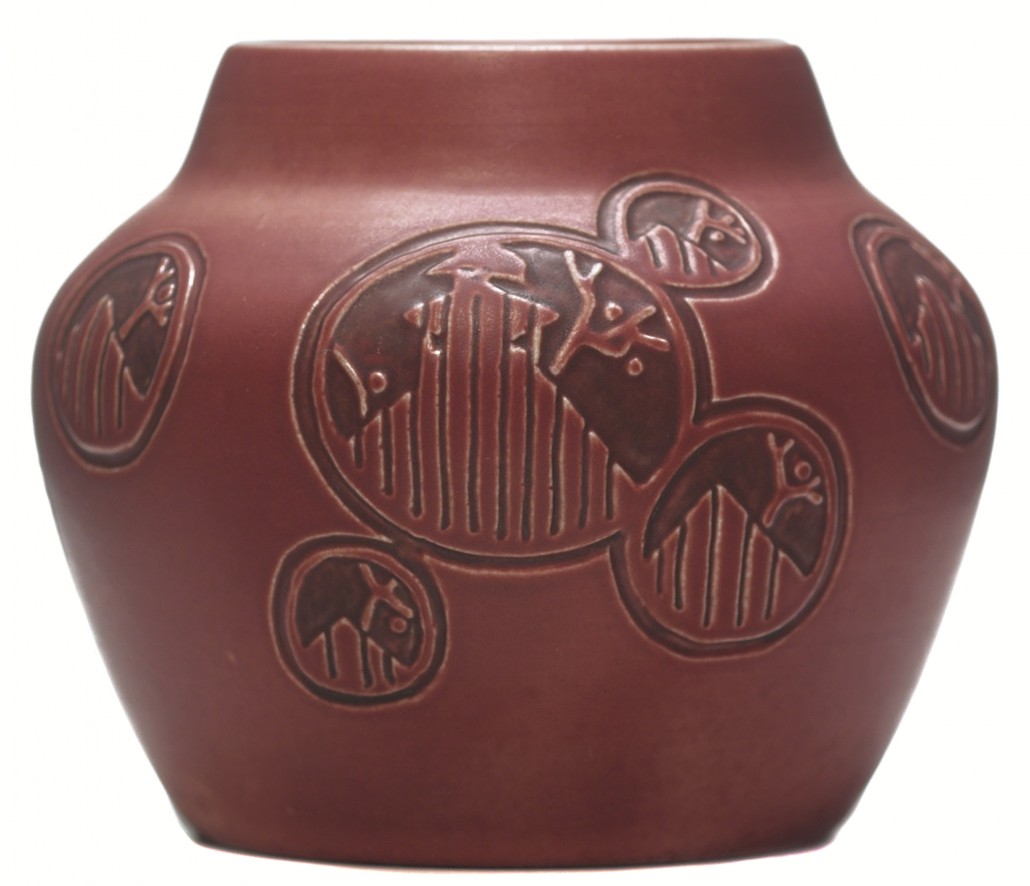 Misfortune certainly played a hand in the dearth of Overbeck pottery. Margaret, the second-eldest of the six Overbeck sisters, died at age 49 in 1911, the year she and three siblings founded Overbeck Pottery. Margaret attended Cincinnati Art Academy in the 1890s, later studied under Arthur Dow of Columbia University and spent a summer working at a Zanesville pottery works. She taught art at several private schools and finally at DePauw University. She returned home after being injured in an auto accident in 1910 and died the following year.

Hanna Overbeck, who attended Cincinnati Art Academy and Indiana State University, is considered the ultimate designer of the family. Between 1903 and 1916 many of her sketches were published in Keramic Studio, a leading journal for china painters. She taught art in public schools before returning home in poor health. Plagued by severe neuritis, she continued to design for the pottery. She died in 1931 at the age of 61. 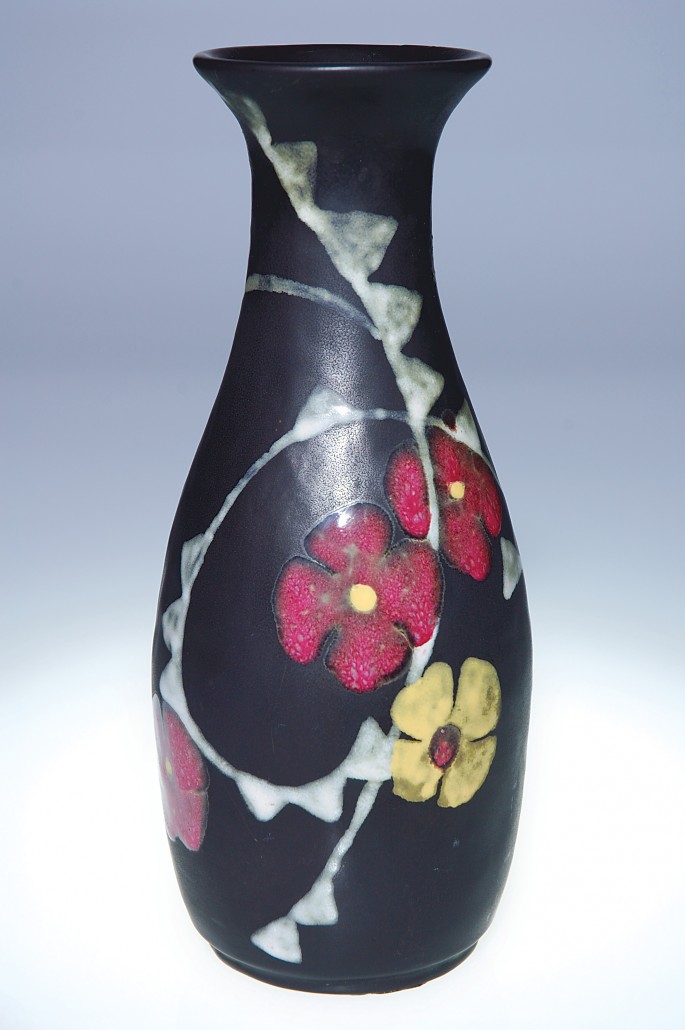 The Overbecks were commissioned in 1920 to make this 9 1/8-inch black vase as a gift to a woman celebrating her 18th birthday. Image courtesy Cincinnati Art Galleries.

Elizabeth Overbeck became the ultimate potter after studying at the New York State School of Clay Working and Ceramics under noted ceramicist Charles F. Binns. She taught, lectured and exhibited widely, bringing considerable recognition to the pottery. Chiefly the potter and technician, she did little designing or decorating. Elizabeth died in 1936.

The youngest Overbeck sister, Mary Frances, was considered the jack-of-all-trades. She designed bookplates, sculpted and painted in addition to creating pottery. Working alone after the death of Elizabeth, she concentrated on sculpting pottery figures. Mary Frances died in 1955.

Two other sisters, Ida and Harriet, and a brother, Charles, rounded out the family. Ida, the eldest and only Overbeck sister to marry, operated a photography studio in Cambridge City. Harriet was an accomplished musician who gave private lessons and maintained the Overbeck household for many years. 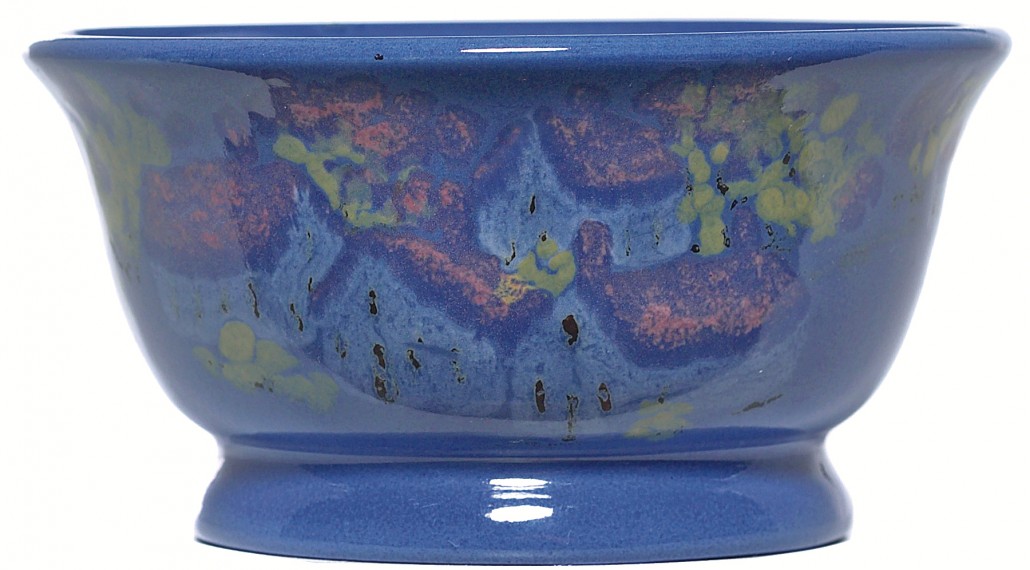 An abstract landscape of houses is the subject matter on this unusual bowl. Measuring 5 inches in diameter, the bowl has the impressed OBK mark on the bottom. Image courtesy Treadway Toomey.

Two principles that guided the Overbecks from start to finish were that all borrowed art, such as motifs and designs from Europe and Japan, was dead art; and all good applied design is original.

Treadway said the Overbecks are best known for their incised and painted matte pottery, and noted that collectors want vases that command a presence on a shelf, specifically “anything that is multicolored—the more colors the better. Nine times out of 10 it’s going to be incised. Many times it’s going to have a geometric feel to it, whether it’s organic or figural. That’s inherent to their pottery,” he said.

While Rookwood and Newcomb produced lines of painted matte pottery, theirs differed in theme and subject matter, said Treadway. “When you see a piece of Overbeck you normally don’t have to pick it up and look at the bottom for a signature. The artwork, the way it was produced, the coloration and many times the shape; it all just screams Overbeck,” he said. 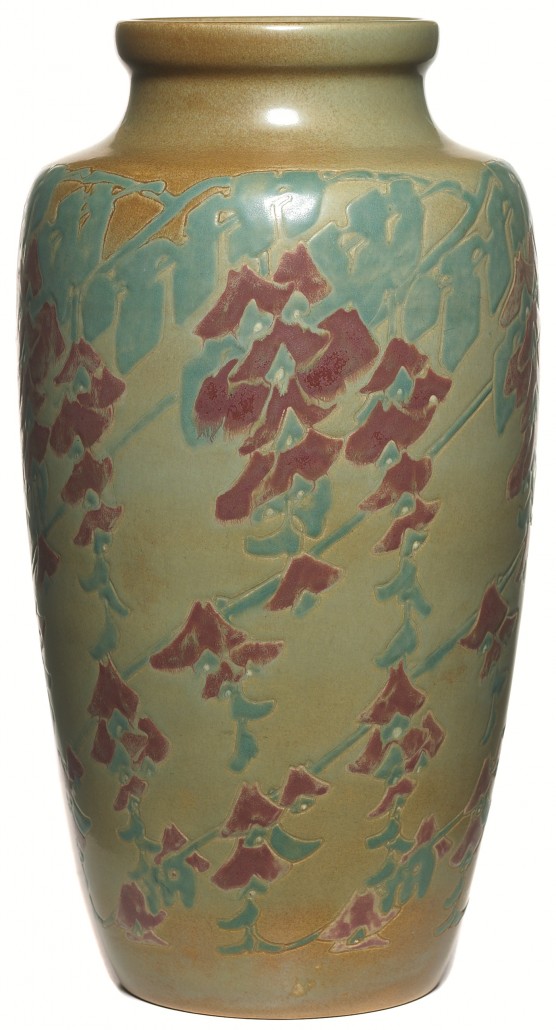 Large Overbeck vases are especially desirable. This 14 1/2-inch vase is decorated with a carved and painted design of red stylized fuchsia and is signed with the artists’ initials E and H. Image courtesy Treadway Toomey.

“Overbeck is a specific type of work and there are few companies that produced that look. The Overbecks were very good at what they did. It was a small output, but they did it very well,” said Treadway. Because of the Overbecks’ limited output, Treadway said some collectors are content to own a single example of their work.

“Anyone who wants a well-rounded collection, whether it’s American art pottery or Arts & Crafts pottery, and has the pocketbook to match that taste, really should have a piece of Overbeck. That said, I cannot emphasize how hard it is to find the right piece. It’s something that does not come along every day,” said Treadway.

Prices for choice Overbeck pottery regularly range from several thousand dollars to more than $20,000. “The highest prices have been paid just recently, but the really good pieces have not been cheap for a long time,” said Treadway.

Crafting items that were functional was also important to the Overbecks. For every large vase they made, they produced many more tea sets, all of which were handmade. 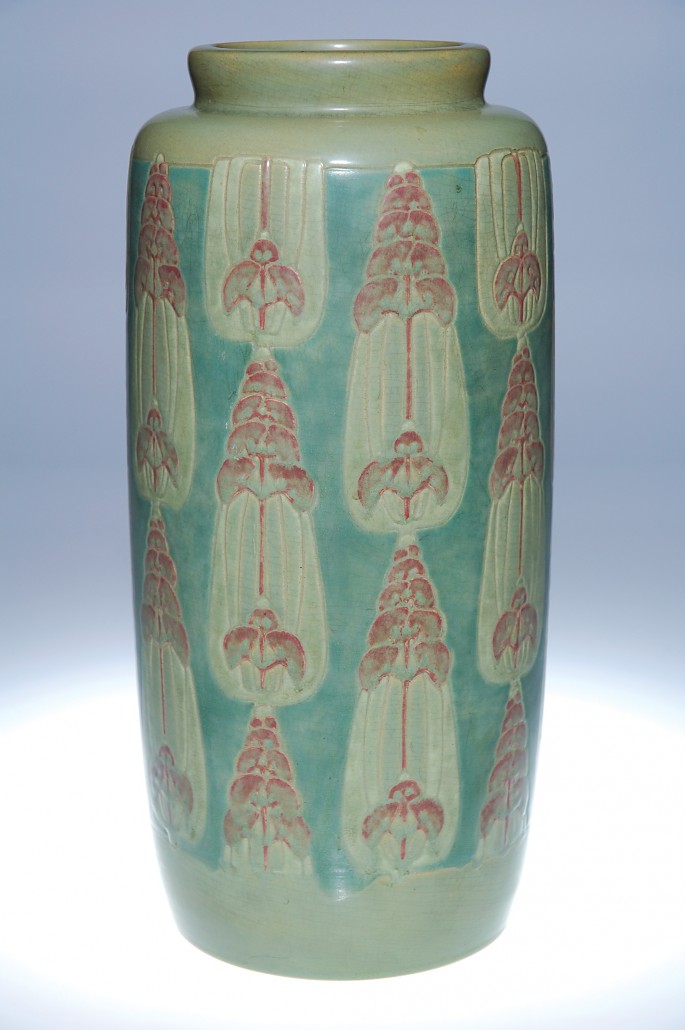 “There’s that old bugaboo that utilitarian things taking a back seat to the strictly artistic. A vase is always going to be more exciting to collectors than a teapot,” said Riley Humler, art pottery specialist at Cincinnati Art Galleries, which sold a 14 1/2-inch Overbeck vase at its Keramics 2007 auction in June for $67,850.

The Overbeck mystique and the scarcity of their work make the pottery all the more popular today. “There couldn’t have been a huge output, particularly early on. Rarity has an impact. I think the whole story of the six sisters, four of whom were involved with the production of the pottery, is a factor. Here in this tiny town in Indiana with a tiny facility these women produced some amazing stuff in a true studio pottery setting.” said Humler. “Rookwood made some truly incredible pottery with a whole raft of workers, artisans, chemists and technical people. At the same time the Overbeck sisters made some amazing things in a backyard setting.” 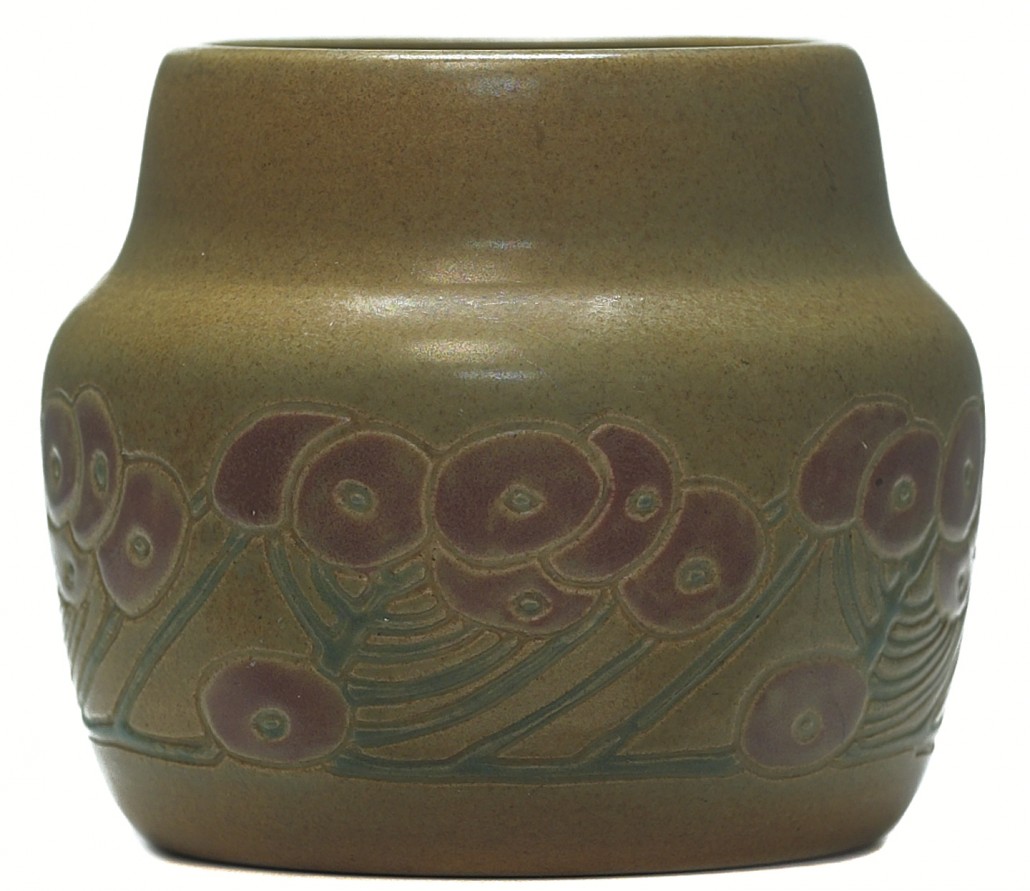 Even small Overbeck pots like this 2 1/2-inch vase are held in high esteem when the look is right. Decorated with a carved and painted floral design in a tan and mauve glaze, this little vessel sold at auction in May 2006 for $5,750. Courtesy Treadway Toomey Galleries.

Even without the support of professional ceramists and the best equipment, the Overbecks managed to create art pottery that holds up fairly well technically to their contemporaries. “Artistically in many cases it’s superb, but from a technical point of view it may not be as good as some of the things Grueby and Teco produced in terms of consistency, “ said Humler.

Even the Overbecks’ functional pieces are scarce because the sisters held steadfast to the Arts & Crafts creed of producing only handmade wares. They declined offers from major department stores to mass-produce their wares.

“Ayers and Marshall Field tried to get them to take orders, but they didn’t want to have to do anything that had to be done on time. They were just artists. They were not in the production business whatsoever,” said Phyllis Worl of the Overbeck Museum in Cambridge City. 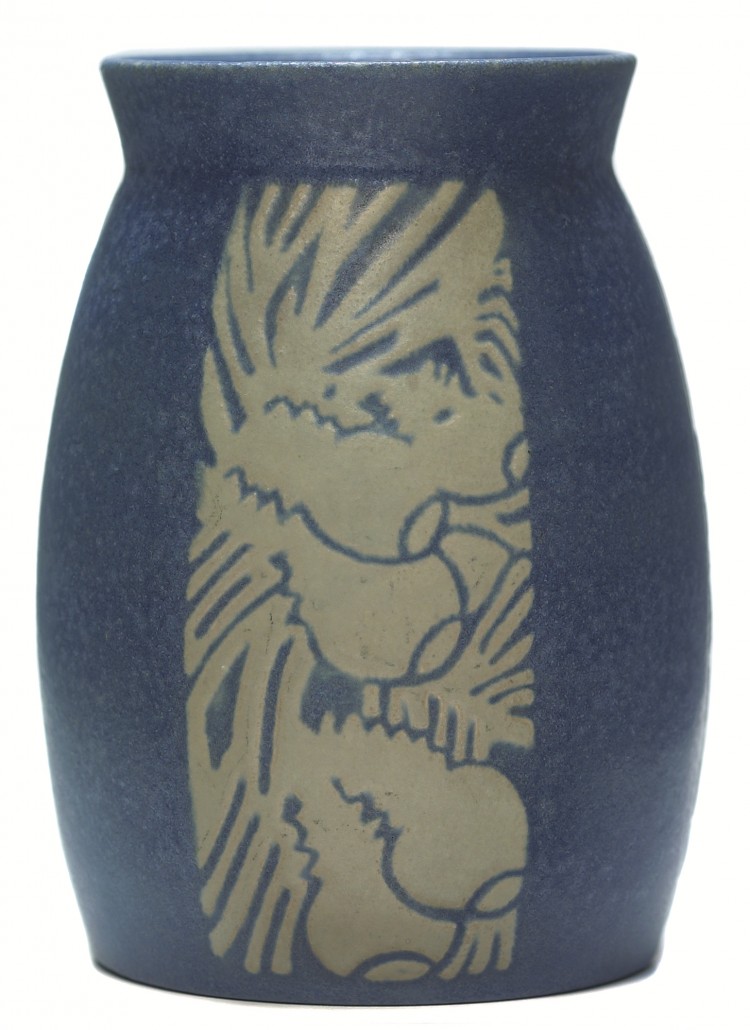 Stylized pinecones on this 5 3/4-inch vase are typical of the cialist at Cincinnati Art Galleries, which sold naturalistic decorations found on Overbeck pottery. This nice
example sold for $7,475 at Treadway Toomey’s June 2007 auction.

However, the Overbecks often took orders from individual customers. “We have a piece in our November sale that was a present for a girl’s 18th birthday. It was a commission. They went to the Overbecks’ house and said here’s what we want. Can you make it?” said Humler.

Worl said the Overbecks were accommodating to customers and visitors. “When you went there, they offered you a cup of tea. They had beautiful manners and were very ladylike,” she said. Worl scoffed at the notion there was anything odd or unnatural about five unmarried sisters living under one roof. “I could see how they could live together. They got along because they were artists. They were a team. In those days a woman couldn’t get married, raise a family and still have a career,” she said.

“They were extremely talented and left the world a lot of beautiful things to prove it,” said Worl. 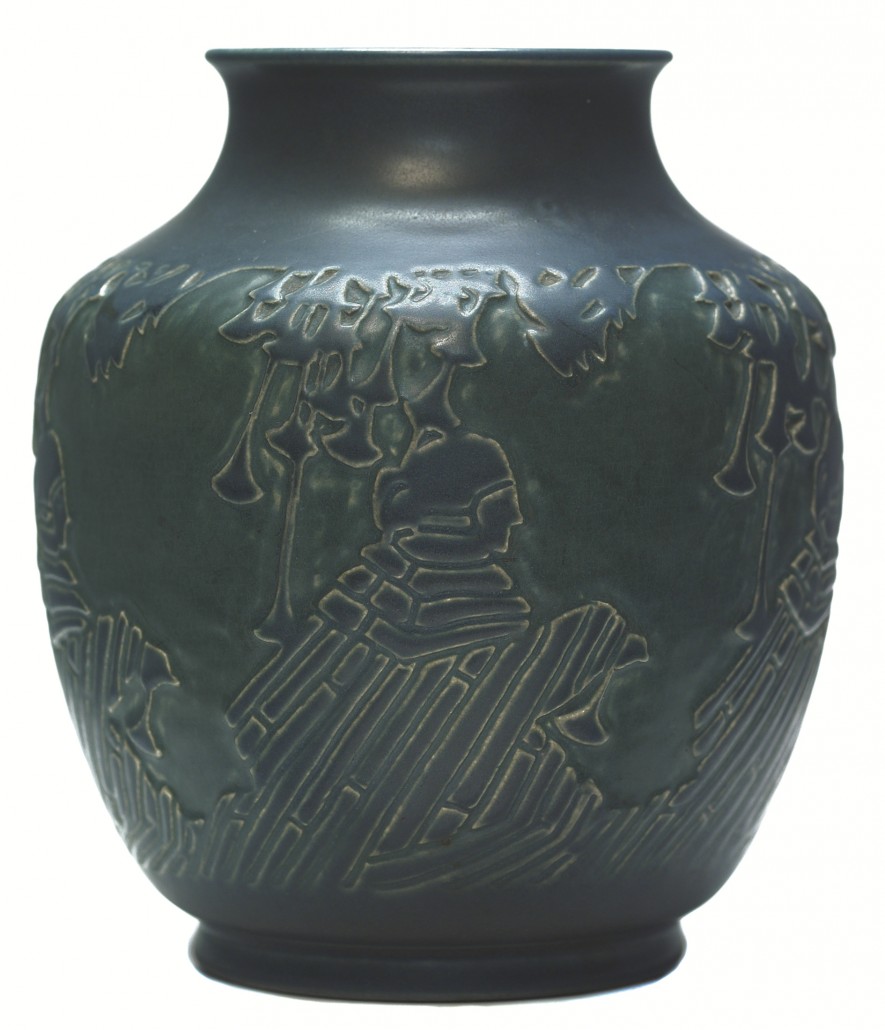