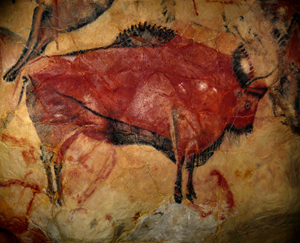 Painting of bison in the cave of Altamira, near the town of Santillana del Mar in Cantabria, Spain. The cave with its paintings has been declared a UNESCO World Heritage Site.

WASHINGTON — Neanderthals may have been cave-painting artists, according to research published Thursday that details a new method of analyzing cave paintings in Spain and shows they are the oldest known to man.

The tests on 50 paintings in 11 caves in northern Spain, described in the US journal Science, hint at a previously unknown talent that may have been held by Neanderthals in Europe more than 40,000 years ago.

There has never before been evidence that Neanderthals produced cave art, but they did bury their dead, used some primitive decorative techniques on their bodies and left behind pendants made of bones and shells, experts said.

“So it would not be surprising if Neanderthals were Europe’s first cave artists,” said co-author Joao Zilhao, a research professor from the University of Barcelona.

The cave images include a club, red discs and handprint stencils that were made by someone placing his or her hand against a cave wall and blowing paint on it.

One such disc in the El Castillo cave dates back more than 40,800 years, making it the oldest cave art in Europe, said the team of researchers.

“We are claiming the oldest reliably dated paintings in the world,” said lead author Alistair Pike from the University of Bristol.

A number of “oldest” claims have been made recently, from the Chauvet cave in France at 32,000 years to a limestone wall dating back some 37,000 years at Abri Castanet, a well known archeological site in southwestern France.

Other analyses of art in India and Australia purport to be older, but none were tested with the latest technique and some interpretations are invalid because they are based on style, not science, the authors said.

While the findings in Spain so far do not prove that the art was done by Neanderthals, “we must say there is a strong probability that that is the case,” said Zilhao.

Another possibility is that the cave art may have been done by the first modern humans to arrive in Europe, with the earliest evidence of that dating to 41,500 years ago. The Neanderthals died out around 40,000 years ago.

Our ancestors in Africa were known to make shell beads and create geometric designs on egg shell containers more than 50,000 years ago, before the dispersal of modern humans in Europe, though no cave art has been found there.

But Zilhao said his hunch is that the Spanish cave art was done by Neanderthals because the procedure they are using for testing, by radioactive decay of uranium on calcite deposits on top of the art, does not actually touch the last layer of material that is in contact with the paint to avoid destroying it.

Therefore, the artwork itself may be several thousand years older than the calcite on top of it, he said.

“It cannot be proven at this time, it is just my gut feeling,” he told reporters, adding that more extensive studies are underway in search of even older evidence.

According to Pike, the team’s analysis technique is superior to radiocarbon dating, which is widely used but can often turn up conflicting dates within the same painting.

“We are attempting to circumvent these problems by using a completely different method that is based on radioactive decay of uranium,” he told reporters.

A very thin calcium carbonite crust falls on top of the paintings over time, in a process similar to the formation of stalagmites and stalactites, and these crusts contain tiny amounts of radioactive uranium.

The uranium decays to thorium, and “it is the measurement of this buildup of thorium that can tell us how long since those crusts formed,” Pike said.

To be certain that the work was done by Neanderthals, scientists would have to find a painting that dates older than 42,000 years, the researchers said.

According to Milford Wolpoff, a leading paleoanthropologist at the University of Michigan who was not involved in the study, the findings add another dimension to our picture of Neanderthal culture, and are reasonable given what is already known about them.

“All these pieces are being put together. It’s a puzzle. What is cool about what is happening today is we are missing fewer pieces.” 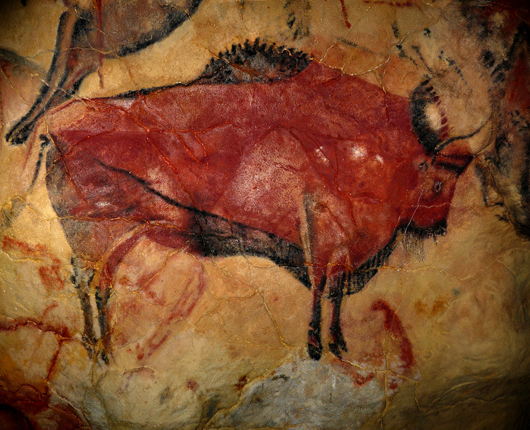 Painting of bison in the cave of Altamira, near the town of Santillana del Mar in Cantabria, Spain. The cave with its paintings has been declared a UNESCO World Heritage Site.