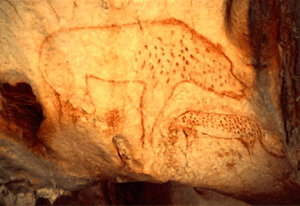 Painting of a hyena found in the Chauvet Cave. This file is licensed under the Creative Commons Attribution-Share Alike 2.0 Generic license.

WASHINGTON (AFP) – Experts have long debated whether the sophisticated animal drawings in a famous French cave are indeed the oldest of their kind in the world, and a study out Monday suggests that they are.

The smooth curves and fine details in the paintings of bears, rhinoceroses and horses in the Chauvet cave in southern France’s picturesque Ardeche region are so advanced that some scholars believe they date from 12,000 to 17,000 years ago.

That would place them as relics of the Magdalenian culture, in which human ancestors used tools of stone and bone and created increasingly advanced art as time went on.

But scientists have previously shown through radiocarbon dating evidence of rock art, charcoal and animal bones in the Chauvet cave that the drawings are older than that, likely between 30,000-32,000 years old, befuddling some who believed that early art took on more primitive forms.

Now, according to research published in the Proceedings of the National Academy of Sciences, a U.S. journal, scientists believe they have confirmation that the paintings are “the oldest and most elaborate ever discovered.”

Their findings are based on an analysis—called geomorphological and chlorine-36 dating—of the rockslide surfaces around what is believed to be the cave’s only entrance.

The research shows that an overhanging cliff began collapsing 29,000 years ago and did so repeatedly over time, definitively sealing the entrance to humans around 21,000 years ago.

That would mean the drawings had to have been done before that, and bolsters the notion that they were created by people in the Aurignacian culture which lived 28,000 to 40,000 years ago.

“Remarkably agreeing with the radiocarbon dates of the human and animal occupancy, this study confirms that the Chauvet cave paintings are the oldest and the most elaborate ever discovered, challenging our current knowledge of human cognitive evolution,” said the study.

“These results have significant implications for archaeological, human, and rock art sciences and seriously challenge rock art dating based on stylistic criteria.”

The cave and its remarkably well-preserved paintings were closed to human access by the rockfalls and were only recently rediscovered in 1994.

Researchers involved in the work came from France’s University of Savoie, Aix Marseille University and the Centre National de Prehistoire. 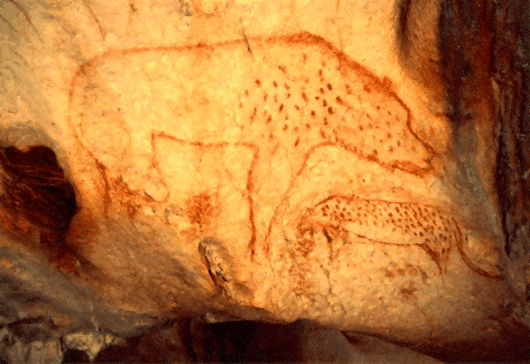 Painting of a hyena found in the Chauvet Cave. This file is licensed under the Creative Commons Attribution-Share Alike 2.0 Generic license.