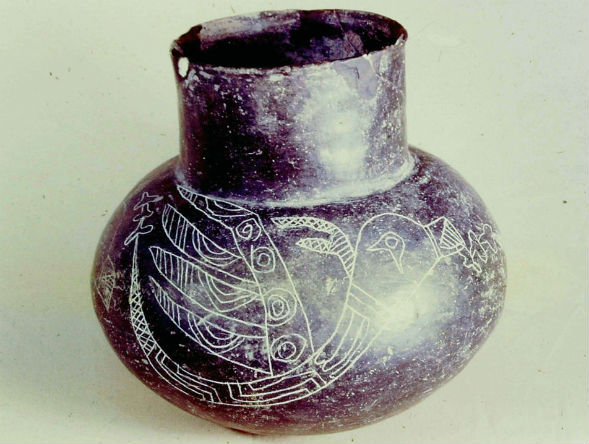 One of the artifacts stolen from Moundville Archaeological Park in 1980. Image courtesy of the University of Alabama Office of Archaeological Research

MOUNDVILLE, Ala. (AP) – The recent recovery of three Native American artifacts stolen nearly 40 years ago could be the thread that unravels the mystery of the greatest antiquities theft in this part of the world.

Hundreds of pottery vessels, bottles, bowls, ornaments and jewelry items were stolen from the Erskine Ramsey Archaeological Repository at the University of Alabama’s Moundville Archaeological Park in 1980. It was a shot in the dark when archaeologists and others contributed to a reward fund for information, which was announced in May.

The publicity worked, leading to the recovery of three vessels in August.

“We were all thinking we’d go to our graves without anything turning up from this burglary,” Jim Knight, curator emeritus of American Archaeology for the Alabama Museum of Natural History at the university, said at a news conference Monday. “This is one of the most exciting things that has happened during my archaeological career.”

Officials aren’t releasing any information about the criminal investigation, only saying that no one has been arrested and no one has claimed any of the $25,000 reward money.

The FBI investigated, but dropped the case in the late 1980s. It is a federal offense to steal “any object of cultural heritage” from a museum. It is also illegal to possess such items knowing that they have been stolen.

“I didn’t have a whole lot of hope for actual recovery,” said John Abbott, director of Museum Research and Collections for the Alabama Museum of Natural History. “In fact, I was stunned when there were some that turned up.”

Knight said in a 2003 interview with The Tuscaloosa News that it would be equally plausible if an artifact surfaced at a flea market in Tuscaloosa or in a multimillion-dollar collection in Japan.

Knight helped organize Associates for the Recovery of Moundville Artifacts, which established the reward fund and contributed $13,000. After the announcement of the reward, other donors came up with $12,000 more—bringing the total in the fund to $25,000.

Excavated in the 1930s, the stolen artifacts made up about 20 percent of the museum’s entire vessel collection. The three that were recovered were ceremonial, Knight said. All were in pristine condition, he said, with no chips or damage and still marked with the original tags.

“These are special because they depict supernatural creatures,” he said. “This is extremely important for Alabama’s heritage, for the Southeast and the eastern United States’ heritage.”

One vessel depicts an engraved skull and skeletal forearm bones and a hand design with straight crosses inside rather than the eye many people are familiar with. The other two vessels depict a winged serpent, a deity that features a rattlesnake tail, wings and deer antlers.

“There are mammals, birds and serpents combined into this dragon-like creature,” Knight said. “This was important in Moundville, the rattlesnake god that’s master of the beneath-world.”

Bill Bomar, executive director for University of Alabama Museums, noted the advances in research into iconography, symbols and art that have taken place since the theft nearly four decades ago. Faculty and students will also be able to study whether the vessels originated or were traded here.

“All of this has advanced in the last 40 years, and we haven’t had these artifacts to do those kinds of studies on,” he said. “Hopefully with these, and any additional ones that are recovered, our information about Moundville is going to increase greatly.”

Alex Benitez, director of Moundville Archaeological Park, said the vessels will soon be on display at the park.

“We’re very excited and look forward to putting them on exhibit very soon,” he said. “This is for all Alabamians.”

The Mississippian Indians settled in what is now the Moundville area at the beginning of the 11th century. The area reached its peak activity and population around A.D. 1300 when it had about 1,000 residents. Around 10,000 resided in the Black Warrior Valley floodplain.

It has been referred to as “the New York City of its time,” Knight said, and nearby residents might not be aware of just how unique the site is.

“I hope this does stir interest,” he said. “Not just among people nationally who may have never heard of Moundville before, but also for the local people who visited for fourth grade Alabama history but have never been back.”

By STEPHANIE TAYLOR, The Tuscaloosa News