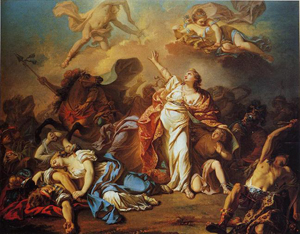 Jacques-Louis David (French, 1748-1825) portrays a scene from ancient mythology in the 1772 painting ‘Diana and Apollo Piercing Niobe’s Children with Their Arrows.’ From the collection of the Dallas Museum of Art.

ROME (AFP) – Seven Roman statues depicting one of the myths recounted by celebrated Latin poet Ovid have been unearthed in excellent condition during excavations at an ancient villa near the Italian capital, archaeologists said Wednesday.

“We had known for a while that there were traces in the area of Valerio Messala,” a rich Roman general who was patron to Ovid, said Elena Calandra, superintendent for archaeology in the Lazio region.

“We carried out exploratory digs before authorising the full-scale evacuation, and found Messala’s swimming pool with the seven statues at the bottom,” she said.

The two-meter-high statues are “in an excellent state of conservation,” she added.

It is thought they may have fallen into the pool during an earthquake around 2,000 years ago.

They depict the myth of Niobe, who bore 14 children and boasted of her fertility to the goddess Leto, who had but two offspring of her own. An enraged Leto sought revenge by having her children, Apollo and Artemis, kill Niobe’s, and the devastated mother fled to the mountains where she turned to stone and wept for evermore.

The myth is recounted in Ovid’s masterpiece, Metamorphoses — but were Messala’s statues inspired by the Latin poet’s tale or did he base his story on the statues?

“We know that there were numerous representations of the myth in paintings and sculptures, in ancient Grece as well. Before leaning towards one hypothesis or another, we have to precisely date the statues — a lengthy job,” Calandra said. 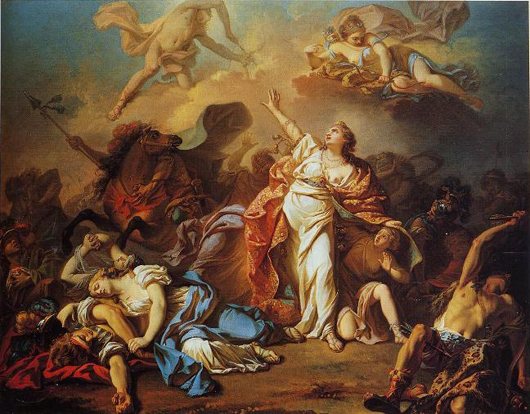 Jacques-Louis David (French, 1748-1825) portrays a scene from ancient mythology in the 1772 painting ‘Diana and Apollo Piercing Niobe’s Children with Their Arrows.’ From the collection of the Dallas Museum of Art.