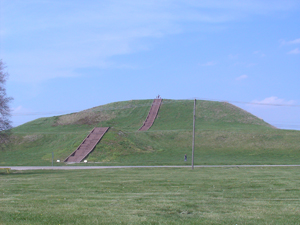 The site of the current archaeological dig is in the vicinity of Monk’s Mound, the largest of the Cahokia Mounds in southwest Illinois. Image courtesy of Wikimedia Commons.

EAST ST. LOUIS, Ill. (AP) – Archaeologists who have uncovered the remains of a prehistoric city beneath what is now East St. Louis are trying to unravel why that ancient city was abandoned while another one just to the east managed to survive two more centuries.

Archaeologists believe Native Americans abandoned the city of roughly 3,000 or more people around the year 1200, some 200 years before a bigger settlement at nearby Cahokia Mounds ended inexplicably.

The St. Louis Post-Dispatch reported Tuesday that the East St. Louis settlement appeared to have been ravaged by fire in the late 1100s, although the cause of that blaze isn’t clear. Joe Galloy, coordinator at the Illinois State Archaeological Survey’s American Bottom Field Station in Wood River, said an attack from outside, rioting or a ritual burning are among theories for the fire’s origin, though archaeologists hope to pinpoint during the dig.

Archaeologists have been working the site since 2008, in advance of construction of an Interstate 70 bridge across the Mississippi River.

Galloy called the archaeological dig near the site of the old St. Louis National Stockyards “an unprecedented look at a Mississippian city” and perhaps the most significant archaeology of any kind under way in the country. About 50 people are working full-time on the effort.

“We’re digging up ancient urban neighborhoods,” he said. “It’s an unprecedented look at a Mississippian city.” When finished, more land will have been excavated than at the internationally known Cahokia Mounds State Historic Site, near Collinsville.

Cahokia Mounds was the administrative center for the mound-building Mississippians, who flourished from around 700 to around 1400 over what is now the Midwest and Southeast. In 1100, Galloy said, Cahokia Mounds had roughly 15,000 to 20,000 people; the United States would have no city as populous until Philadelphia in the late 1700s.

Galloy said Cahokia Mounds, the East St. Louis settlements and similar mounds in St. Louis were in near alignment. The only surviving mounds are in the Cahokia Mounds state historic site, with others on both sides of the river long lost to development.

At Cahokia Mounds and many other archaeological sites, land intentionally is left undisturbed for future excavation. But exploration in the path of the bridge needs to be finished in the next two or three years or the opportunity is lost.

Last year, Galloy said, a 3 1/2-inch figurine of a woman holding a cup or dipper was found near a manure drain installed at the stockyards more than a century ago. Workers have found axes and arrow points, along with pieces of pottery.

None of the findings may be a “game changer” greatly altering beliefs about the Mississippians, Galloy said, though he said the project is producing new information against which to evaluate those beliefs. He said researchers will be analyzing the findings for years.

“We’re still in the beginning of the way to understanding,” he said.