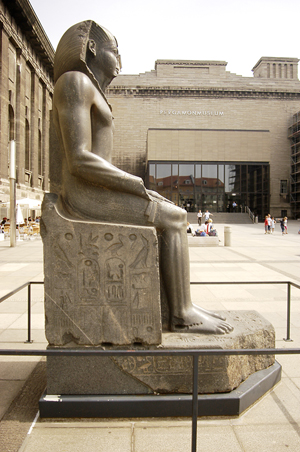 NEW YORK – A monumental ancient Egyptian statue of a seated pharaoh—probably Amenemhat II—will be lent to The Metropolitan Museum of Art by Berlin’s renowned Ägyptisches Museum und Papyrussammlung, Staatliche Museen zu Berlin – Preussischer Kulturbesitz for a period of 10 years, beginning this month. The ten-foot-tall, nearly nine-ton, 4,000-year-old sculpture entered the Berlin museum’s collection in 1837. Because of a construction project now underway—to renovate the courtyard on Museumsinsel (Museum Island) where the artwork has most recently been displayed—the statue had to be moved, thereby providing the opportunity for this long-term loan. The sculpture will go on view in the Metropolitan’s Great Hall for approximately one year before it is moved into The Lila Acheson Wallace Galleries of Egyptian Art. The Middle Kingdom sculpture is an outstanding example of ancient Egypt’s magnificent colossal statuary, of which very few examples can be found in American museums.

Thomas P. Campbell, Director and CEO of the Metropolitan Museum, commented: “Thanks to the generosity of our colleagues in Berlin, this splendid statue will be on loan to the Met for the next ten years, allowing a very rare glimpse at such monumental Egyptian sculpture in the United States. To celebrate its arrival, we are installing this imposing pharaoh for the coming year in our Great Hall, where it will surely awe our visitors and encourage them to explore the Met’s own outstanding Egyptian collections.”

The single block of stone (granodiorite) from which the sculpture was carved was quarried at Aswan, then shipped north over more than 500 miles to the area of Memphis, near present-day Cairo. The sculpting was completed in this location, and the statue was erected in a temple complex.

The sculpture depicts a seated king—wearing only a kilt around the hips and upper legs—on a simple cubic throne with a short vertical seatback. A kind of blanket spread over the top of the seat hangs down at the back. The ceremonial bull’s tail that all pharaohs wore—attached to their belts, as a sign of their strength—is seen between the king’s legs. On his head is the royal head cloth called nemes; and over the forehead is the royal cobra, symbolizing the ruler’s awesome power. The pharaoh also wears a ceremonial (false) beard, and in his right hand he holds a piece of cloth, which is a status symbol (perhaps originally a cloth to wipe sweat from the forehead).

On the basis of style, the sculpture has been assigned to the reign of the 12th Dynasty pharaoh Amenemhat II (ca. 1919–1885 B.C.). Some six centuries later, the 19th Dynasty kings Ramesses II (reigned ca. 1279–1213 B.C.) and Merneptah (reigned ca. 1213–1203 B.C.) had their names and titles inscribed on it. (At this time, the statue was probably transported to Piramesse, the capital of the Ramesside kings, in the eastern Delta.) The incised broad collar and a pectoral with the names of Ramesses II, and underneath it Merneptah on the chest of the statue, are also later additions. Some of the facial features—such as the mouth and ears, as well as portions of the eyes, nemes, and cobra—also were altered to resemble images of Ramesses II. The statue was moved again, 200 years later, to Tanis (now called San el-Hagar), the residence of the kings of Dynasty 21 and 22. Probably at this time the name of Seth in titularies of Ramesses and Merneptah was erased, because this god—although revered at Piramesse—was otherwise a very ambivalent figure. Traces of repair on both sides of the throne indicate that the sculpture may have broken during transport from Piramesse to Tanis. Early in the 19th century, the statue was uncovered at Tanis.

The Reign of Amenemhat II

Amenemhat II was the third king of Dynasty 12, the most important period of the Middle Kingdom (ca. 2010–1640 B.C.). He reigned ca. 1919–1885 B.C., the first two years together with his father, the great Senwosret I. Amenemhat took over a country that Senwosret I had newly organized, stabilized, and made prosperous. Amenemhat himself conducted a successful military campaign into what today is Syria, gaining booty and more than 1,500 prisoners of war who were put to work in the king’s building projects such as, for instance, his pyramid. Through peaceful trade with the area of present-day Lebanon, Egypt acquired wood; expeditions to the Sinai brought copper and turquoise; and from Nubia in the south came incense and gold. The building of fortresses that Senwosret I had started in Nubia continued under Amenemhat II.

This was a peak period for the arts of ancient Egypt. Two large amethyst scarabs with Amenemhat II’s name excavated by the Metropolitan Museum at Dahshur testify, for instance, to the high quality of semi-precious stone cutting at the time. From the reign of Amenemhat’s successor Senwosret II comes some of the finest jewelry ever made in antiquity. Stone sculptures that can be attributed to Amenemhat II’s time such as a large sphinx in the Louvre and the Berlin colossus combine monumental size with meticulous detail and keenly observed anatomical features. Several works of the period show influences from the art of the Old Kingdom Pyramid Age. 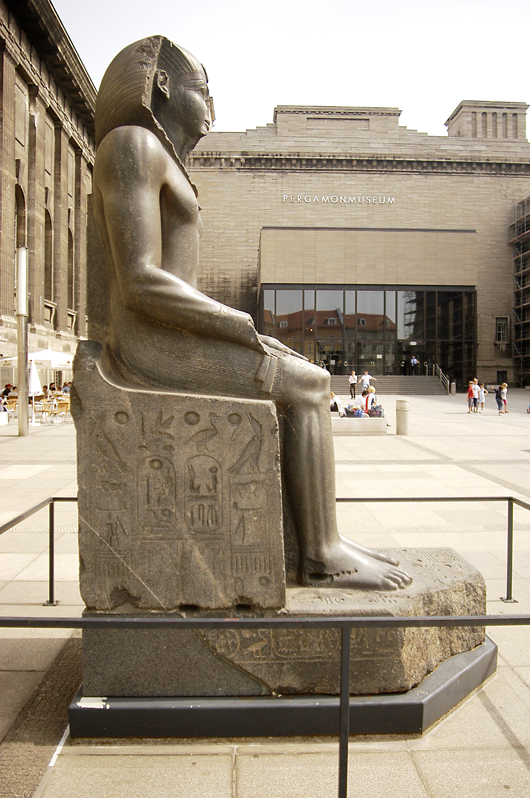 Malibu mansion poised to set record at US auction