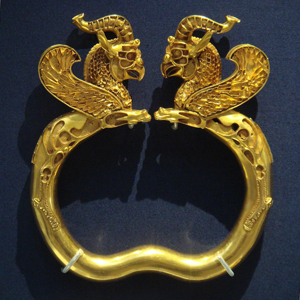 A gold bracelet from the Oxus Treasure in the British Museum. Image courtesy of Wikimedia Commons.

DUSHANBE, Tajikistan (AFP) – The British Museum will donate to Tajikistan replicas of a collection of ancient gold and silver treasure after the Central Asian state demanded its return, Tajik officials told AFP on Monday.

The British Museum has agreed to donate Dushanbe five sets of replicas of more than 170 gold and silver artifacts and 1,500 coins that were found beside one of the country’s rivers in the 19th century, a culture ministry official said.

The impoverished ex-Soviet Central Asian nation in 2007 had demanded the return of the hoard, known as the Oxus Treasure, which was recovered 134 years ago beside the Oxus river and dates back to the fifth century B.C.

“The people of Tajikistan will have an opportunity to familiarize themselves with the Oxus Treasure—though in replicas, made at the highest quality level by the British Museum from the originals,” said Muzaffar Azizov, the head of the historical heritage department at the Tajik ministry of culture.

“There are ongoing discussions about the timing and logistics of the material being delivered to the museum in Tajikistan,” Esme Wilson, the museum’s spokeswoman, told AFP.

Tajik authorities said they expect the replicas to arrive by the end of this year.

The treasure was found in 1877 in southern Tajikistan and acquired by merchants, local scholars said. It arrived in Britain after bandits ambushed the merchants crossing from Kabul to Peshawar.

The artifacts, which include coins, rings, armlets and seals, belong to the Achaemenid Persian empire, which extended from Egypt to Afghanistan.