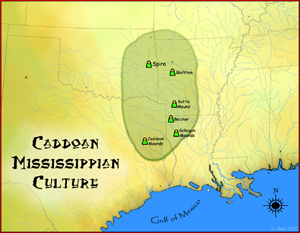 ALTO, Texas (AP) _ Following a winding highway, once known as part of the El Camino Real de los Tejas, southwest out of Alto, there is a variety of wild flowers and multiple historic markers dotting a trail leading to the Caddo Mounds state historic site – a place where a community of Caddo Indians thrived centuries before Christopher Columbus set sail from Spain.

The site, formerly owned and operated by the state park system, now is under the operation of the Texas Historical Commission, and Caddo Mounds Site Manager Jennifer Price said she is excited about the future of the location.

Caddo Mounds was first opened to the public in 1982, but the site had been explored and mapped by archaeologists since 1919, who have, since, uncovered many artifacts and details of this particular group of Caddos known as the Hasinai.

Price said archaeologists have determined the Hasinai moved into the area about 900 A.D. and quickly established their presence by building the first ceremonial mound and a burial mound, where the remains of many Caddos still lie beneath tons of earth.

An excavation of the burial mound in 1970 provided a window into the culture of the group and archeologists found the remains of Caddos buried in the mound. After the study, the mound was recovered and none of the remains were displaced.

The ceremonial grounds played a large part in the Caddo culture and due to the parent group of Caddos in East Texas maintaining their political and economic relationship with other Caddos, the site in Cherokee County became a major regional trade center.

During the Late Caddoan Era, many of the Caddos’ ceremonial rites were discontinued, which scientists believe shows a weakening of the old social structure and values. With the loss of ceremonial rites, the site near Alto was abandoned as Caddos moved to other locations sometime around 1700.

The Cherokee County site consists of two temple mounds, a burial mound and a large portion of the adjacent village area.

Today, a walking trail guides visitors around the earthen mounds. A visitors center with exhibits and displays also is on site. Price said the center has more than 200 artifacts, mostly pottery shards, flint blades and arrowheads, and various “mock” tools.

The center also has a short video which visitors can watch actual Caddo Indians discuss their culture and their feelings about the archaeological studies on their ancestors.

Price said new developments at the site are in the works and said the public’s tax money is being well spent to preserve this piece of history.

“Part of the El Camino Real has actually been found on the site and soon we will open an area to the public where they will be able to see actual wagon wheel ruts from early travelers passing through the area,” she said.

Price said maintenance has been the top priority at the site and plans are set for additional improvements.

“The taxpayers’ money is being put to good use here. We are adding to the site, improving the facilities and are adding additional walking trails,” she said.