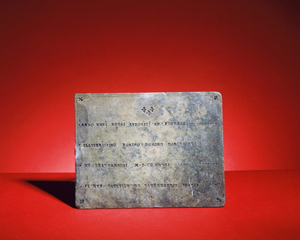 As 14-year-old Hattie May Foster recalled later, “In the beginning, we girls were out walking, and went on the hill. We were up there a little while, and in a short time three boys came up on the hill. They had been out hunting. We were standing there talking. As I was scraping in the dirt with my foot, I saw the square end of a lead plate showing about one inch above the ground. When I saw it I kicked it out and picked it up. As I picked it up it looked like a lining out of a big range stove. ‘What is this?’ I asked.”

George O’Reilly answered that it was a piece of lead.

As Hattie recalled, “George had a knife and said, ‘Hand it here and I’ll scrape the dirt off so we can read what’s on it.’”

When he scraped away the dirt, all they could read was part of a date that had the number 17 in it, Hattie recalled. George announced it wasn’t anything but a piece of lead and said he would sell it. The others scoffed.

A girl named Martha Burns said, “It is the stone on which Moses wrote the Ten Commandments.”

Not quite as important an artifact as that, perhaps, but still crucial for South Dakota and the other states along the upper Missouri River, the Capital Journal newspaper reported.

What those Fort Pierre children had found was a marker buried 170 years earlier, in 1743, by two French explorers, a pair of brothers. Their own journal, discovered in a French archive in 1851, describes their journey as “the Expedition of the Chevalier de la Verendrye and one of his brothers to reach the Sea of the West.” They aren’t named, but many historians believe the Chevalier was Louis-Joseph Gaultier de La Verendrye and the brother was Francois de La Verendrye.

They had been sent by their father, Pierre Gaultier De La Verendrye, an explorer himself, from the Hudson Bay area of Canada in search of a fabled water route to the Orient.

The plate they buried measures about 8 inches by 6 inches. It’s about one-eighth of an inch thick. It is significant as a marker of French exploration in North America, and also as a document that helps establish French claim to a vast area of North American real estate.

Fortunately for history, George O’Reilly’s plan to sell the plate for scrap metal took a different turn when he and his father met two members of the South Dakota Legislature who were out for a walk on the bluffs above Fort Pierre that Sunday. Elmer Anderson and George W. White examined the place, deciphered the date “1743” and the name, “Verendrye.”

When they returned to Pierre later that day, they telephoned Doane Robinson, the secretary of the State Historical Society, who went out next day to see the plate for himself. Eventually Robinson arranged to buy the plate with money raised from the society’s membership.

The original is now in the South Dakota Cultural Heritage Center in Pierre, while an exact replica remains with the Verendrye Museum in Fort Pierre.

The Latin text on one side of the plate – probably stamped in France into the lead before being brought to America, historians of the South Dakota State Historical Society believe – says:

In the twenty-sixth year of the reign of Louis VX, the most illustrious Lord, the Lord Marquis of Beauharnois being Viceroy, 1741, Pierre Gaultier De La Verendrye placed this.

The French writing scratched with a knife or some other sharp implement on the other side of the plate. It is harder to read but historians think it says:

WHAT IT MEANS FOR HISTORY

The Verendrye plate was one the greatest finds for history in South Dakota.

Jay Vogt, director of the South Dakota State Historical Society, doesn’t disagree. He said it’s one of the two crown jewels from among the 31,000 total artifacts in the South Dakota State Historical Society’s collection – the other being the carved Sioux horse effigy that is widely regarded as a masterpiece of Native American sculpture. But the Verendrye plate is significant because it establishes without doubt where and when European explorers made their first documented visit to South Dakota.

“It’s the oldest Euro piece in our collection,” Vogt said. “French explorers tended to bury lead plates as markers of where they had been. But they weren’t too good about recording where they had buried them.”

Those Fort Pierre school children in 1913 provided an assist by unearthing the plate. Jay Smith, the museum director for the South Dakota State Historical Society, said that settled conclusively some of the scholarly speculation about where the Verendryes had traveled.

“It validates what we thought we knew about where these brothers went,” Smith said.

And, adds Dan Brosz, the society’s curator of collections, it makes a mark in time well. “It’s the earliest proof of European presence in what we now know as South Dakota,” Brosz said.

However, he notes that the oldest Native American artifacts in the collection are much older, some dating to 12,000 years ago.

The Verendrye Monument on the bluffs above Fort Pierre, with its historical marker, is one of only 16 National Historic Landmarks in South Dakota, Vogt said. In the Pierre area, the only other National Historic Landmarks are the former fur-trading post, Fort Pierre Choteau, just north of Fort Pierre near state Highway 1806; and the Arzberger Site in Hughes County, which was a large fortified Native American village on a mesa overlooking the Missouri River from about A.D. 1500.

Not only people from France and Canada, but even members of the Verendrye family have visited Pierre and Fort Pierre to see the artifact and the location where it was found.

Darby Nutter, board president for the Verendrye Museum of Fort Pierre, which takes its name from the Verendrye brothers, said the location is a natural vantage point to see the Missouri River, making a bend out of site toward the southeast; and it also overlooks the Bad River Valley, coming in from the west to join the Missouri.

Vogt agrees that would make the site an ideal location to leave a marker because it is the kind of site that later Europeans would be sure to visit.

“It is a fantastic view of the river and it is close to the river,” Vogt said. “There is no doubt that it was a very important place in terms of sight lines and a strategic view of the area.”

Nutter adds that the location also happened to be close to the route of the ox and mule trains as they climbed out of the Missouri River Valley to begin the long journey from Fort Pierre to Deadwood in the last decades of the 19th century.

That may have played a role in how the plate was discovered.

Though the Verendrye brothers originally stacked a cairn of rocks above the plate they buried the mark the place, the rocks had long since vanished by the time the plate was found in 1913. Nutter said the story is that passing freight wagons occasionally picked up a few rocks to take with them to help even out deep places in the trail that might otherwise be difficult for their wagons to cross.

That left no indication that anything interesting might have been buried on the bluffs above Fort Pierre.

On the other hand, Nutter adds, removing the rocks also allowed causes such as frost and erosion – and, yes, the foot traffic of Fort Pierre’s children – to expose one of the great buried secrets in South Dakota history. 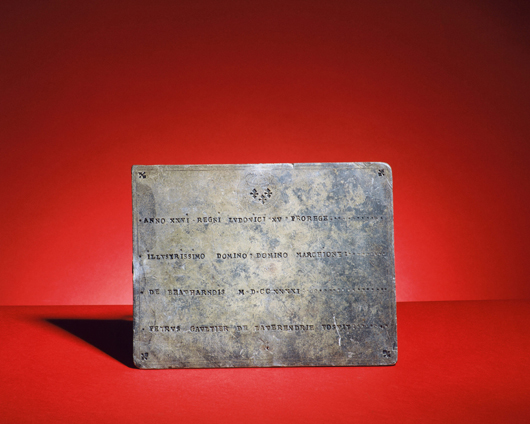 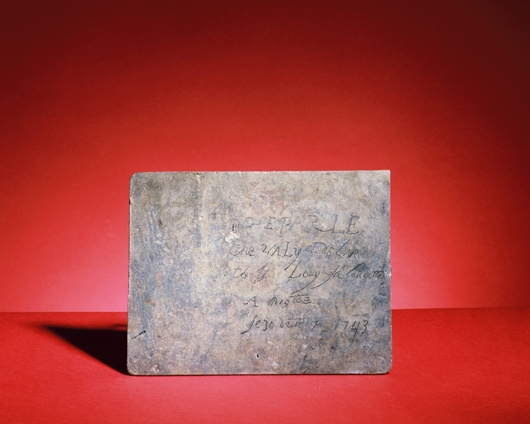 The reverse of the Verendrye Plate. The artifact is significant because it establishes where and when European explorers made their first documented visit to South Dakota. Image courtesy of the South Dakota State Historical Society.

Visitors to furniture exhibit told to make themselves at home