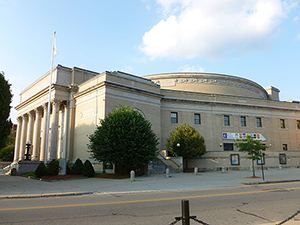 The flag was uncovered in the basement of the Lowell Memorial Auditorium. Dedicated to local veterans of war, the 2,800 facility was constructed in 1922 by the architectural firm of Blackall, Clapp & Whittemore. Image by Emw. This file is licensed under the Creative Commons Attribution-Share Alike 3.0 Unported, 2.5 Generic, 2.0 Generic and 1.0 Generic license.

LOWELL, Mass. (AP) – Union troops were deep in enemy territory, outnumbered badly by Confederate forces on a battlefield in Clinton, La., near the Mississippi border. Among the Union troops in Louisiana were many from Lowell, who were recruited to fight in the far South by Gen. Benjamin Butler of Lowell, who had been appointed military governor of New Orleans in 1862.

Solon Perkins, a lieutenant in the 2nd Massachusetts Cavalry Regiment, was caught on the wrong side of the Clinton battle on June 3, 1863. Shot once in the arm, Perkins initially fought on.

“Now boys, let us show these scoundrels that we can fight,” Perkins implored his comrades, before being hit again only minutes later.

He died about two hours later, suffering little or no pain, according to a Lowell minister who passed on details of Perkins’ death later that summer based on information given to Perkins’ mother.

Not until 151 years later has a piece of that battle been found – a tattered, faded and worn flag that Perkins had flying over him or maybe even worn at the time he was shot.

The flag was uncovered last month only when employees of Global Spectrum, which runs Lowell Memorial Auditorium, were in the basement of the building and saw it. They contacted their supervisor, who reached out to the Greater Lowell Veterans Council, which is now planning to have the flag preserved and displayed in the auditorium’s Hall of Flags.

The council has a duty to have the flag restored, said Page, adding that no one knows exactly why the flag was put in basement storage.

“I couldn’t believe it when I saw it,” he said.

Piecing together the flag’s history came together pretty quickly, thanks to an inscription on the thick wood framing around the flag: “Under this flag at Clinton, La., on June 3, 1863, Solon A. Perkins was killed.”

The council’s historian, Richard Howe Jr., got to work, using his city politics and history blog to spread word of the finding, which also brought more information.

“I recognized the guy’s name right away,” said Howe, who leads tours of Lowell Cemetery. Howe’s tour actually passes by Perkins’ gravestone, which Howe said he now plans to add to the tour.

The speculation is that so much is known about Perkins because he was from a wealthy family. Perkins, who was born in Lancaster, N.H., in 1836, went into international business after graduating from Lowell High School, working in Buenos Aires and in Mexico, becoming fluent in French and Spanish, according to Howe’s research.

At age 27, Perkins enlisted for the Civil War.

Eileen Loucraft, a board member at the Lowell Historical Society, said she thinks the guidon flag, which differs from a normal flag by the V-shape cut out of its right side, may have actually been worn like a sash by Perkins. That’s because a trail of descriptions of the flag over the years make it clear it’s the same item, with its elaborate and unique frame. In an 1894 story in the Lowell Daily Sun, the flag was described as a sash worn by Perkins when he was killed.

The flag, Loucraft found in her research, appears to have been donated to Lowell Memorial Auditorium in 1929 by Mary Sawyer Knapp, a woman known to have a large collection of war relics.

It was installed in the auditorium, then must have been removed at some point during renovations, Howe said. It was found in the basement behind a piano.

The next tasks for the Greater Lowell Veterans Council are fundraising and getting the flag conserved.

One expert on textile conservation, Camille Myers Breeze, the founder and director of Museum Textile Services in Andover, said the flag appears to have been in the same rough condition now as when it was framed. It’s in too poor shape to be restored, but it could be made to look “tidier and fresher,” she said.

“Instead of seeing an ancient artifact, you could see what an amazing survivor it is,” Breeze said, calling the amount of documentation on the flag “extraordinary.”

Conservation could be difficult, she said, based on looking at photos and reading descriptions of it. It isn’t clear without taking the frame apart if the flag is glued or stitched to the board, or simply pressure-mounted, for example. She declined to speculate how much conserving the flag would cost.

The flag and frame, which weigh an estimated 60 or 70 pounds, certainly aren’t in great shape. The left side of the glass has separated from the frame, and streaks run through the dusty glass as if it’s the result of humidity. One of three wood panels behind the flag is missing.

A few dozen names of what look like locations of battles, places like Yellow Bayou, Fisher’s Hill and Georgia Landing, are etched in the side of one of the frames.

A guidon flag had a more practical than ornamental purpose during the Civil War, experts said.

They would often be associated with cavalry, or those who fought on horseback, and were typically flown with a state and national flag, said Peter Drummey, the head librarian at the Massachusetts Historical Society. The head of a regiment would typically carry the guidon flag atop a pole to identify the regiment, Breeze said.

The flags were also used to signal to soldiers during battle where they stood in relation to the rest of their regiment and to individual units, Drummey said.

Despite the flag’s rough condition, such flags are valued by collectors, according to the website for antique flag collector Jeff R. Bridgman Antiques Inc.

“Military issue, Union Civil War battle colors are one of the ‘Holy Grails’ of the flag- collecting world,” the company says. “They rarely surface in the marketplace, because so few survived in private hands.”

Copyright 2014 Associated Press. All rights reserved. This material may not be published, broadcast, rewritten, or redistribute. 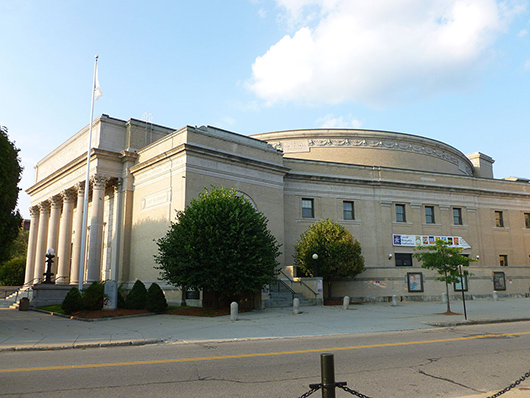 The flag was uncovered in the basement of the Lowell Memorial Auditorium. Dedicated to local veterans of war, the 2,800 facility was constructed in 1922 by the architectural firm of Blackall, Clapp & Whittemore. Image by Emw. This file is licensed under the Creative Commons Attribution-Share Alike 3.0 Unported, 2.5 Generic, 2.0 Generic and 1.0 Generic license.

Group to honor Minn. residents of US Civil War

Feb. 21 auction to fund equine therapy for children with addictions
Scroll to top