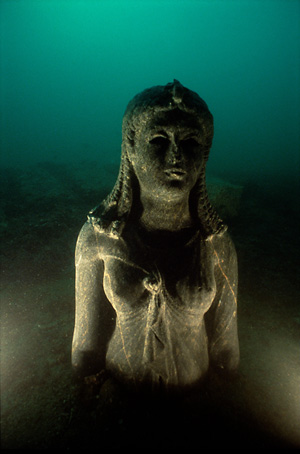 One of the finest finds from the bay of Aboukir is a Graeco-Egyptian product of the Ptolemaic era – a statue of a Ptolemaic queen in black granite. The 7-foot-tall statue is most likely a representation of Cleopatra II or Cleopatra III, dressed as goddess Isis. © Franck Goddio/Hilti Foundation, photo: Christoph Gerigk.

CINCINNATI — The world of Cleopatra VII, which has been lost to the sea and sand for nearly 2,000 years, will surface at the Cincinnati Museum Center at Union Terminal on Feb. 18, 2011 when “Cleopatra: The Search for the Last Queen of Egypt” opens its doors.

Cincinnati was selected as the second stop in the world for the exhibition, which will remain on view through Sept. 5. The exhibition features nearly 150 artifacts from Cleopatra’s time and takes visitors inside the present-day search for the elusive queen, which extends from the sands of Egypt to the depths of the Bay of Aboukir near Alexandria.

The exhibition is organized by National Geographic and Arts and Exhibitions International, with cooperation from the Egyptian Supreme Council of Antiquities and the European Institute for Underwater Archaeology (IEASM). It features statuary, jewelry, daily items, coins and religious tokens that archaeologists have uncovered from the time surrounding Cleopatra’s rule, all of which are visiting the United States for the first time. An original papyrus document from Cleopatra’s time containing an inscription that scientists believe was written in Cleopatra’s own hand will also be on display.

After Egypt succumbed to Roman forces and Cleopatra famously took her own life following the suicide of her lover Mark Antony, the Romans attempted to wipe her legacy from the pages of history. Cleopatra thus has remained one of history’s greatest enigmas, and her final resting place is one of Egypt’s great unsolved mysteries. The artifacts in this exhibition are woven into the story of her rule and life in ancient Egypt during her dynasty (Ptolemaic period). The story of her life and time unfolds in a dramatic setting with high-definition multimedia and original soundscapes. Each guest receives an audio tour with admission that provides a rich background to the featured artifacts.

Visitors to the exhibition follow the modern-day parallel stories of two ongoing expeditions being led in Egypt by Dr. Zahi Hawass, Egypt’s pre-eminent archaeologist and secretary general of the Supreme Council of Antiquities, and Franck Goddio, French underwater archaeologist and director of IEASM. Goddio’s search has resulted in one of the most ambitious underwater expeditions ever undertaken, which has uncovered Cleopatra’s royal palace and the two ancient cities of Canopus and Heracleion, which until 10 years ago had been lost beneath the sea after a series of earthquakes and tidal waves nearly 2,000 years ago.

On land, Hawass and a team of archaeologists are searching for the tomb of the ill-fated lovers Cleopatra and Mark Antony. Never-before-seen artifacts referencing Cleopatra, excavated by Hawass’ team at the temple of Taposiris Magna, about 30 miles west of Alexandria, are featured.

“Queen Cleopatra has captured the hearts of people all over the world. Remembered as a beautiful, charismatic and powerful woman, many things about her life are still shrouded in mystery. In 2005, we began to search for the tomb where she was buried with her lover, Mark Antony, which we believe was in an ancient temple near Alexandria,” said Hawass. “So far, we have found coins, statues and even shafts that are leading us closer to what would be one of the most important archaeological discoveries in history. This exhibition, which includes objects found in our current excavations, will give the American people the chance to learn about our search for Cleopatra, and will share with them the magic of this fascinating queen.”

The exhibition also showcases artifacts from Goddio’s continuing underwater search off the Mediterranean coast of Egypt, begun in 1992. Goddio’s remarkable finds bring visitors inside his search for the lost world of Cleopatra, including remnants from the grand palace where she ruled. Visitors also see underwater footage and photos of Goddio’s team retrieving artifacts from the ocean and bringing them to the surface for the first time in centuries.

Cleopatra, the last great pharaoh before Egypt succumbed to Roman opposition, lived from 69-30 B.C., with a rule that was marked with political intrigue and challenges to her throne. She captivated two of the most powerful men of her day, Julius Caesar and Mark Antony, as she attempted to restore Egypt to its former superpower status.

The nearly 150 artifacts in the exhibition – from the smallest gold pieces and coins to colossal statues – provide a window into Cleopatra’s story as well as the daily lives of her contemporaries, both powerful and humble. The artifacts weigh in at about 30 tons in total, including two colossal 16-foot granite statues of a Ptolemaic king and queen from the 4th – 3rd centuries B.C., pulled from the sea by Goddio’s team. 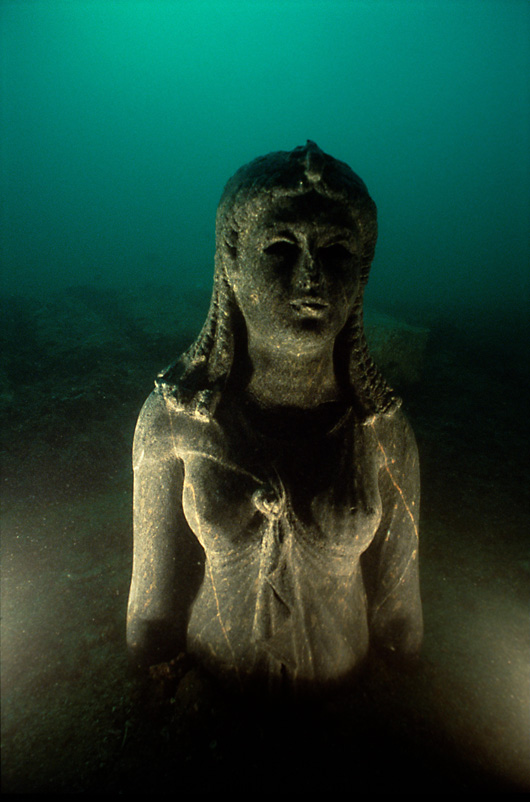 One of the finest finds from the bay of Aboukir is a Graeco-Egyptian product of the Ptolemaic era – a statue of a Ptolemaic queen in black granite. The 7-foot-tall statue is most likely a representation of Cleopatra II or Cleopatra III, dressed as goddess Isis. © Franck Goddio/Hilti Foundation, photo: Christoph Gerigk. 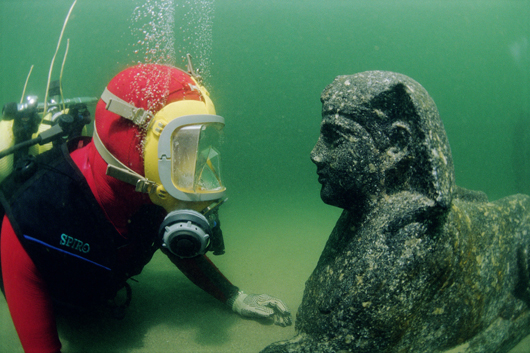 A diver examines a sphinx made of black granite. The face of the sphinx is believed to represent Ptolemy XII, father of the famous Cleopatra VII. It was found during excavations in the ancient harbor of Alexandria. © Franck Goddio/Hilti Foundation, photo: Jerome Delafosse. 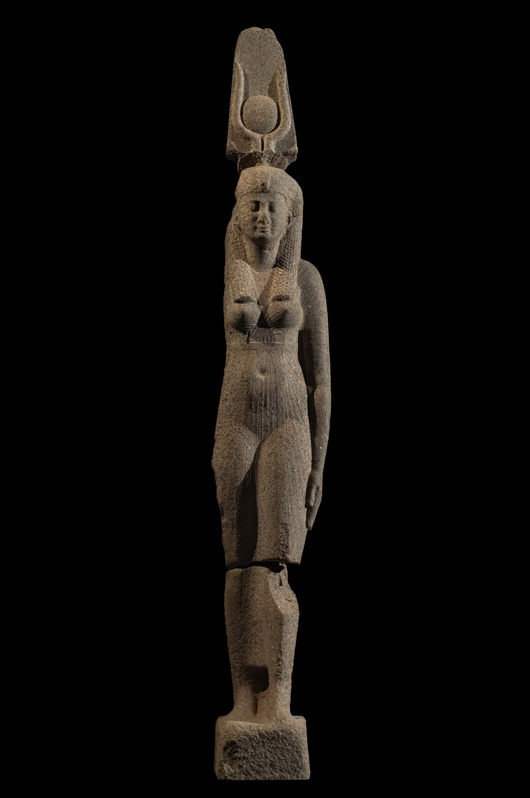 Recovered from the submerged ancient city of Heracleion during the explorations of Franck Goddio’s team, this red granite statue of a Ptolemaic Queen is about 16 feet tall and weighs 4 tons. ©Franck Goddio / Hilti Foundation, photo: Christoph Gerigk. 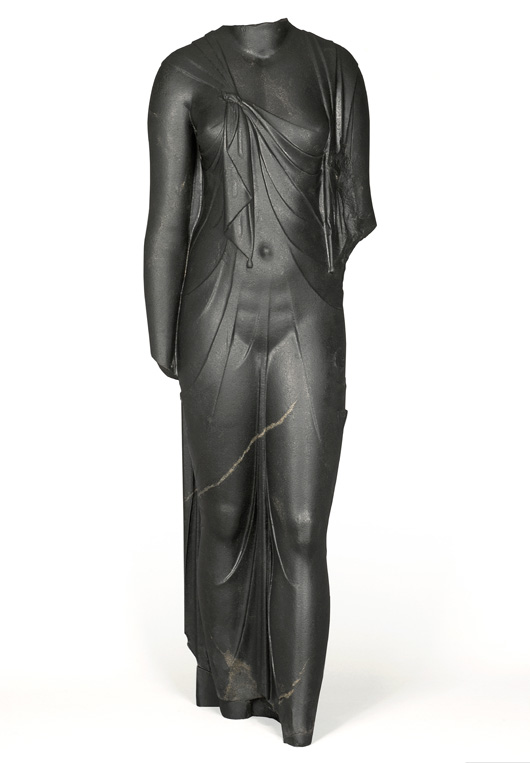 Cut in black granite, this feminine body has a startlingly sculptural quality. Complete, the statue must have been slightly larger than life-size. It represents one of the queens of the Ptolemaic dynasty, likely Arsinoe II. The statue was found at the site of Canopus. © Franck Goddio / Hilti Foundation.

The famous and infamous are signed up for Signature House’s Feb. 12-13 sa...