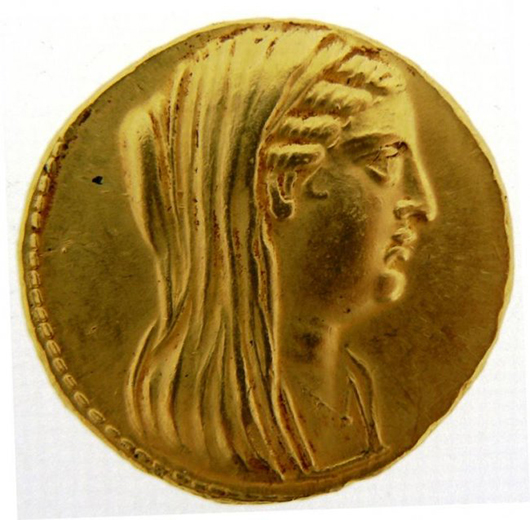 AMHERST, N.Y. — A priceless cache of ancient Greek and Roman coins that had become a kind of buried treasure has been “rediscovered” at the University at Buffalo, which had paid little attention to the coins since they were donated in 1935.

The collection of 55 gold and silver coins date as far back as the fifth century B.C. Among them are a dozen gold coins from Rome — one each from the eras of Julius Caesar and the 11 emperors who followed him.

Assistant professor Philip Kiernan, who arrived at UB in 2010 from a German coin museum, had heard from an alumnus that UB held ancient coins. But even after tracking them down, he had his doubts.

“I saw these trays and thought, oh this is some kind of reproductive set from the early 20th century, some kind of copies,” Kiernan said Wednesday, displaying the find for reporters. “However, when we opened up the trays and pulled out the coins — nope, they’re perfectly good ancient coins.”

There were three wood-framed glass trays, one holding the 12 gold Roman coins and the other two holding 40 silver Greek coins. A small leather pouch contained an additional three gold Greek coins. The newest of the lot is from the first century A.D.

“I was flabbergasted,” Kiernan said. “I couldn’t believe that an institution like UB had a collection of this quality in its special collections, as of yet unstudied, unpublished … coins that were issued by the most powerful and most important city-states of the Classical and Hellenistic worlds.”

Kiernan is in the process of developing a graduate seminar that will examine the history of each coin, with the findings to be published.

Neither Kiernan nor Michael Basinski, interim director of special collections, could put a monetary value on the collection, calling it priceless in terms of its historical value.

The coins arrived at UB along with a collection of rare books from Buffalo lawyer Thomas B. Lockwood, who had funded construction of UB’s Lockwood Memorial Library. Lockwood, described by Basinski as “a gentleman’s collector,” had bought the coins at an auction of a Danish collector’s estate in 1925. It’s unknown how much he paid.

But the coins were valuable even in ancient times. The gold coins each represented at least a month’s wages for an ordinary person.

“For that reason, because these are a means of storing wealth rather than trade coins, they’re extraordinarily well preserved,” Kiernan said. “They haven’t been rubbed through people’s fingers in the marketplace.”

The silver coins would have been circulated internationally within the Mediterranean world, he said, but were the “one hundred- or two hundred-dollar bills of the ancient world.”

All were struck between two hand-carved iron dies.

One of the coins, from the era of the Roman emperor Otho, contains an apparent mistake in the engraving. On its reverse side, the Roman goddess of security, Securitas, holds a wreath and cornucopia, instead of her usual wreath and scepter. It’s one of countless tidbits to be explored.

“They’re essentially magical,” Basinski said, “because they are portals to other worlds.”

What made Americans laugh 80 years ago? The answer is Krazy!

Reading the Streets: NYC gets ‘tanked’
Scroll to top