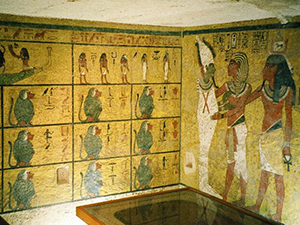 Painted walls in the burial chamber of KV62 (Tutankhamun’s Tomb) in Egypt’s Valley of the Kings. Photo taken by Hajor, December 2002, licensed under the Creative Commons Attribution-Share Alike 3.0 Unported license.

LUXOR, Egypt (AP) – Egypt on Wednesday inaugurated an exact replica of the tomb of King Tutankhamun in the desert valley where many of its ancient pharaohs were buried, aiming to protect the 3,300-year-old original from deterioration caused by visiting tourists.

The facsimile, in an underground chamber not far from the original in the Valley of the Kings, recreates the tomb down to minute detail. Spanish and Swiss experts recreated the elaborate wall murals using a 3D scanning technology. In the middle of the burial chamber stands a rectangular rock setting where in the original King Tut’s sarcophagus and mummy once rested.

In a hall between the burial chamber and an antechamber hang photos and explanations of the discovery of the tomb and its treasures in 1922 by British archaeologist Howard Carter.

Egyptian tourism officials, who unveiled the replica Wednesday alongside foreign dignitaries, are hoping the exhibit will help revive a tourism industry that has been heavily battered by the country’s unrest since the 2011 uprising that toppled autocrat Hosni Mubarak.

A pillar of the Egyptian economy, tourism plunged by more than 30 percent in 2011 and, after slowly building back the following year, was heavily hit again by a wave of violence surrounding the military’s ouster last summer of Islamist President Mohammed Morsi. Tourism officials have said revenues in the first three months of this year fell 43 percent from the same period in 2013, down to around $1.3 billion.

The 18th Dynasty King Tut has long been a major draw of tourists to Egypt _ both his tomb in the Valley of the Kings on the western bank of the Nile opposite the southern city of Luxor, and the golden treasures uncovered in it, most of which are now in the Egyptian Museum in Cairo.

But the tomb has suffered from the crowds of tourists descending into it over the years. Tourists’ breath damages the ancient stone and murals, and its walls expand and contract with changing temperatures, causing paint to flake off and opening fractures that dust enters, experts say.

“These tombs were never built to be visited, they were built to last for eternity,” said Adam Lowe, of the Factum Foundation, a Madrid-based conservation organization that created the facsimile in collaboration with Zurich-based Society of the Friends of the Royal Tombs in Egypt and the Egyptian Tourism and Antiquities ministries.

“They lasted very successfully for 3,300 and in the 90 years since it has been open, it suffered a great deal,” Lowe told The Associated Press. “All of the attempts to try and conserve it create more problems.”

For the time being, the original Tut tomb will remain open, but tourism authorities are aiming to reduce visitors and steer them toward the replica, said Mohammed Osman, vice president of the Chamber of Tourist Companies. Ticket prices for the replica will be 50 Egyptian pounds, around $7, half the price for visiting the original, he said.

Egyptian Antiquities Minister Mohammed Ibrahim and Lowe said facsimiles will also be made of the tombs of the pharaoh Seti I and Nefertari, a wife of the pharaoh Ramses the Great, both currently closed to the general public.

Experts carried out the copying work on the original in 2009 and the building of the replica in Madrid was finished in 2011, but delivery was delayed several times by Egypt’s tumultuous political conditions, Lowe said.

“We are here to celebrate but also to send a message that this area is a wonderful place to visit, and now with this tomb in place, it becomes an even more interesting place to visit for tourists,” James Moran, ambassador of the European Union, said at the opening ceremony. The EU helped in transport of the replica to Egypt.

Osman said he hoped the ceremony — which was attended by 20 ambassadors — will send “a reassuring message that Egypt is safe” and encourage a return of tourists. 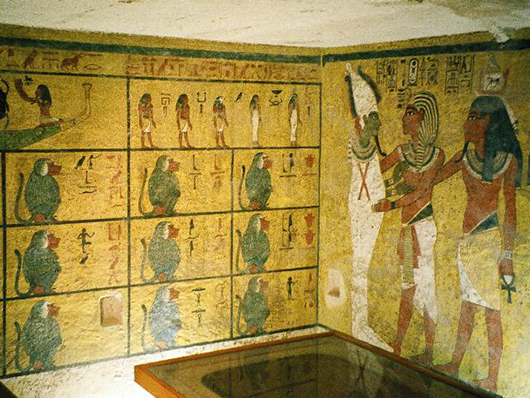 Painted walls in the burial chamber of KV62 (Tutankhamun’s Tomb) in Egypt’s Valley of the Kings. Photo taken by Hajor, December 2002, licensed under the Creative Commons Attribution-Share Alike 3.0 Unported license.

Rare tomb of woman found in Egypt Valley of Kings