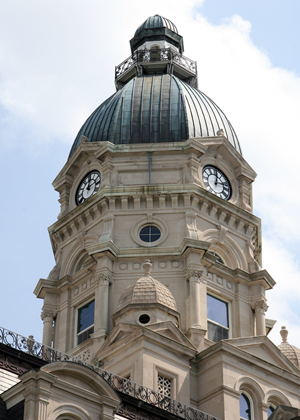 The dome of the Vigo County Courthouse in Terre Haute, Ind. Image by Huw Williams, courtesy of Wikimedia Commons.

TERRE HAUTE, Ind. (AP) – Despite receiving a multi-million-dollar facelift a few years ago, there is still plenty of history inside the walls of the Vigo County Courthouse.

One striking piece of that history is now on display inside a large glass case on the courthouse ground floor – the 19th century machinery that operated the massive courthouse clock.

As with many local government structures, the Vigo County Courthouse features a big clock in its towering dome, more than 200 feet above the ground. For most of the past 120-plus years, that giant clock, which faces north, east, south and west, kept time thanks to the cast-iron clockworks assembled in New England not long after the Civil War.

On direction from the Vigo County Commissioners, county maintenance workers and employees of Smith’s Bell and Clock Service of Mooresville, Ind., the massive machinery was dismantled, carefully carried down steep iron stairs and then reassembled on the ground floor of the courthouse. It is now standing inside a large glass case for anyone to see.

“It’s pretty unique,” said Jake Compton, director of maintenance for the historic courthouse, which was constructed in the 1880s. It took five people most of a full day to move the clock from the tower to the ground floor, he told The Tribune-Star.

The clock was installed in the courthouse in time for the building’s opening in 1888, said Mike McCormick, a Vigo County historian.

For more than a century, the clockworks stood inside the courthouse dome with four, long iron rods extending to the faces of the four clock faces. Those rods slowly rotated, moving the hands on all four clock faces at the same time, Compton said.

The company that made the clock in the 1880s, the E. Howard Clock Co. of Boston, Mass., guaranteed it to operate for 200 years, Compton said. It was still functioning about two years ago when the county switched to a fully electronic system, he said.

For many decades, it was necessary for someone to climb the steep stairs into the tower to wind the clock every day, Compton noted. He also discovered original instructions for oiling and maintaining the machinery, which will also eventually become part of the courthouse display.

E. Howard Clock Co. was a nationwide supplier of large, sophisticated clocks in the latter half of the 19th Century. According to documents Compton uncovered in studying the clock’s history, the company also sold clocks in the 1880s to Rose-Hulman (then called Rose-Polytechnic) and H.F. Schmidt, a jeweler, watchmaker and engraver in Terre Haute. Courthouses and town halls in several Indiana cities had or have E. Howard clocks, including Indianapolis, Greencastle, Danville and Vincennes.

The heavy clock was disassembled and moved downstairs in early March. In doing the job, workers took photographs and labeled the parts carefully so they could reassemble the clock, Compton noted. They were also dealing with some heavy materials. The cast iron base of the clock weighs an estimated 500 pounds, he said.

Today, the clock atop the courthouse dome is operated by small electronic boxes behind each clock face. And an electronic signal now cause the big bell two floors below to mark the hours.

Vigo County Commissioner Mike Ciolli was the driving force behind moving the old clock from the tower to the ground floor of the Courthouse, a job that cost the county about $3,000, including the glass and wooden case in which the clock is on display, he said.

“It’s something numerous people have been interested in seeing,” Ciolli said of the antique. But getting most people up the narrow stairs into the tower is “almost impossible,” so putting it on display seemed like a good solution, he said. The alternative was to leave it in the tower to deteriorate over time, he said.

“It’s part of the history of the courthouse,”Ciolli said of the old clock. “I just felt we should share it.” 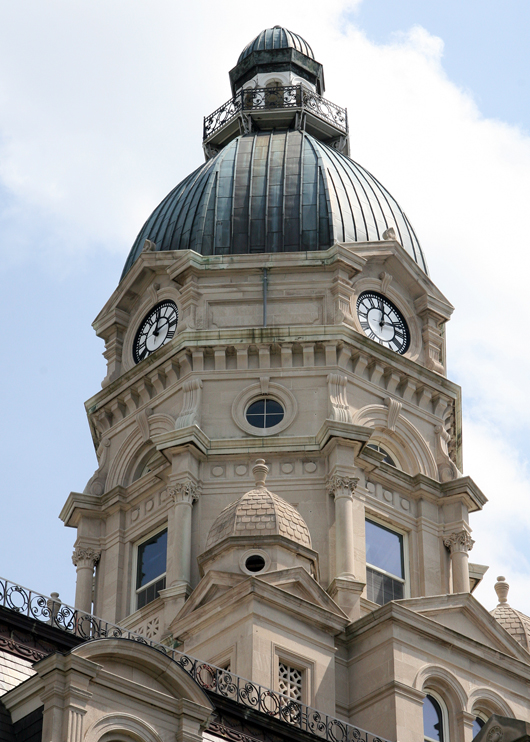 The dome of the Vigo County Courthouse in Terre Haute, Ind. Image by Huw Williams, courtesy of Wikimedia Commons.