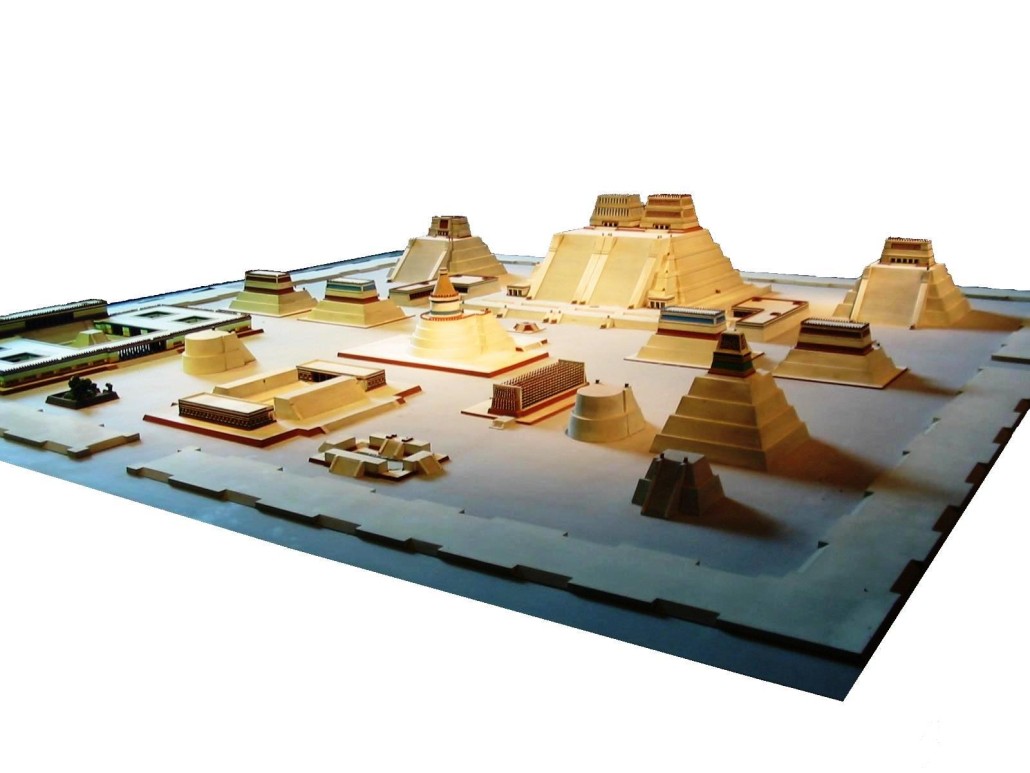 Model of the Aztec City of Tenochtitlan at the National Museum of Anthropology in Mexico City. A re-creation of El Templo Mayor is shown center back. Photo by Thelmadatter

MEXICO CITY (AP) – A Mexican archaeologist said his team has found a tunnel-like passageway that apparently leads to two sealed chambers, the latest chapter in the search for the as-yet undiscovered tomb of an Aztec ruler.

The Aztecs are believed to have cremated the remains of their leaders during their 1325-1521 rule, but the final resting place of the cremains has never been found. Outside experts said Tuesday the find at Mexico City’s Templo Mayor ruin complex would be significant.

The National Institute of Anthropology and History said Monday that a team led by archaeologist Leonardo Lopez Lujan had discovered an 8.4-meter (27-foot) long tunnel leading into the center of a circular platform where dead rulers were believed to be cremated.

The mouth of the tunnel was sealed by a 3-ton slab of rock. When experts lifted it in 2013, they found a hollow space marked by offerings by both rich and grisly.

Gold ornaments and the bones of eagles and infants were found in an offering box. Two skulls of children between five and seven years old were found with the first three vertebrae, suggesting they may have been decapitated. The kind of stone knives used in human sacrifices were also found, as well as a hand and bones from two feet.

But one researcher detected signs that a passageway appeared to lead deeper into the ceremonial platform, known as the Cuauhxicalco, where written accounts from after the 1521 Spanish conquest indicated that rulers’ remains were burned.

“Once the rocks and dirt were dug out, we saw that it led directly into the heart of the Cuauhxicalco,” Lopez Lujan said. “At the end (of the passageway), there are what appear to be two old entrances that had been sealed up with masonry.”

It would be a logical place for rulers remains to lie — the Templo Mayor site was the most significant temple complex in the Aztec capital, known as Tenochtitlan — but Mexican archaeologists have been searching in vain for the tombs for years.

In 2007, archaeologists using ground-penetrating radar detected underground chambers directly below a huge stone monolith carved with a representation of Tlaltecuhtli, the Aztec god of the earth. At the time, Lopez Lujan suspected that an emperor’s tomb might lie beneath. But none was found, despite the presence of rich offerings.

Any artifacts linked to an emperor would bring tremendous pride to Mexico. The country has sought unsuccessfully to recover Aztec artifacts like the feather-adorned “shield of Ahuizotl” and the “Montezuma headdress” from the Ethnology Museum in Vienna, Austria.

But Lopez Lujan is being cautious, saying the presence of graves at the end of the newly found passageway is simply a theory that could be wrong. The blocked-up entrances will be excavated starting in 2016.

“What we are speculating is that behind these sealed-up entrances there could be two small chambers with the incinerated remains of some rulers of Tenochtitlan, like Moctezuma I and his successors, Axayacatl and Tízoc, given the relative dating of the surrounding constructions,” Lopez Lujan said.

Moctezuma I, the second Aztec emperor, ruled from about 1440 to 1469. Moctezuma II was the emperor who first confronted — and succumbed to — Hernan Cortes.

Dr. Michael E. Smith, a professor of anthropology at Arizona State University who was not involved in the dig, said “Leonardo knows the archaeology and ethno-history better than anybody, and he is not one to grandstand or make fantastic claims to garner publicity. Thus I would think his prediction is reasonable.”

“The lack of any royal burials in Tenochtitlan is a long-standing mystery,” Smith said. “But the proof is in the pudding. What will they find when excavation continues?”

University of Florida archaeologist Susan Gillespie, who also was not involved in the project, wrote that the find “could be quite significant.”

“We have pictures from the 16th century documents of the wrapped corpses of kings. Their “cremains” should be somewhere in the Templo Mayor vicinity according to the documents, but one cannot expect a great tomb chamber as was the case of the earlier Maya kings,” wrote Gillespie . Some Mayan leaders, like the Palenque ruler Pakal, were buried in sumptuous crypts or stone coffins.

While the tomb is unlikely to be anything as grand as Pakal’s elaborately carved stone sarcophagus — in which his skeletal remains were found — it’s hard to say what would be found in an Aztec royal tomb.

“It is not surprising that these cremains have not yet been found or identified,” wrote Gillespie. “Archaeologists don’t quite know what they’re looking for.”

Discovery of tunnel may unlock secrets of Teotihauacan ruins

Museum boots up $45,500 for Kenbak computer at Auction Team Breker