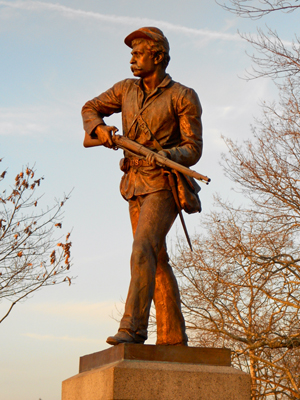 GETTYSBURG, Pa. (AP) – A twig snaps and brush rustles in woods on the Gettysburg battlefield. My horse does not flinch. It’s nothing more than a small animal scurrying away. But on a hot summer day nearly 150 years earlier, it could have been the enemy.

The rolling farmland that is Gettysburg can be toured in a number of ways, but on horseback you can transport yourself to the vantage and vulnerability of a Civil War officer on horseback directing his troops in the three-day battle. On a recent family trip, my husband, our daughters, ages 9 and 14, and I toured the battlefields on horseback with a Gettysburg licensed battlefield guide. The tour allowed us to go into sections of the battlefield that were not part of auto or bus tours and provided intricate details of the July 1-3, 1863 battle that was a turning point in the Civil War.

Pamela Grimes, owner of Hickory Hollow Farm, has up to 15 horses available for battlefield tours, and says visitors need not have any experience riding. The horses fall into step while walking along the wooded dirt trails, kicking up clouds of dust along the way, and need just a little direction from riders to keep them in line, but all four of us novices were fine. Grimes, with a helper and a licensed battlefield guide, Les Fowler, also accompanied our tour.

As we mounted our horses, Grimes’ team told us our horses’ names and a little about their personalities. My 9-year-old daughter Madigan’s horse, Spirit, was quick and likely would have been used as a messenger or scout horse in 1863. My husband Rob’s horse, Pebbles, was a calm leader and took the front of the line. My horse, Raggity Ann, liked to snack on brush or grass along the trails. Our daughter Nicole’s horse, Rock, was a bit slower and brought up the rear for our family.

Much of the battlefield now appears as it did in 1863, when Confederate troops moved into Pennsylvania that hot summer, so it is easy for young and old alike to grasp the vulnerability of troops marching across an open field or having the advantage of being on the high ground. The battlefield has undergone a landscape rehabilitation since 2000, including cutting non-historic trees, replanting orchards and rebuilding missing fences, to make it appear much as it did 150 years ago, said spokeswoman Katie Lawhon at Gettysburg National Military Park, which averages about 1.2 million visitors a year.

“Now, you can get a wonderful feel for what the soldiers actually saw. This field has changed dramatically in just the seven years that I have lived here,” said Fowler, the battlefield guide.

Most of the buildings on the battlefield in 1863 are still standing and are well-maintained. In addition, there are more than 1,300 monuments and 400 cannons. Rocks and other markers seen in iconic Civil War photographs make it easy to pinpoint exactly where the picture was taken.

Our ride lasted two and a half hours and covered about four miles roundtrip, starting near McMillan Woods and across to the Henry Spangler Farm, which served as a field hospital for soldiers during and after the battle.

The tour was point-to-point, with riders gathering around Fowler at key spots between riding to hear the story of what we were seeing.

Our group then headed to the site of Pickett’s Charge, where thousands of troops of the Army of Northern Virginia marched toward Union lines on July 3, their own line nearly a mile wide. The famous, futile charge was named for one of the Confederate generals, Maj. Gen. George Pickett. After being slowed by climbing fences along the nearby road, they came into range of the Union infantry on Cemetery Ridge, which we could see less than a mile away.

Fowler described how the Confederate line shrunk to nearly half its size as it closed in to cover the gaps left by wounded and killed men. It was easy to imagine as we could see the tree lines, fences and fields in front of us.

A statue in the area where Gen. Robert E. Lee observed the carnage of the failed charge from his horse, is one of the most realistic monuments because the face was made from a life mask of Lee and the bones of his horse, Traveller, were measured for accuracy, Fowler said.

As attendance and interest in the site grows, tours are increasingly in demand, so reservations are a must, whether you’re looking for a horseback tour or a tour by one of Gettysburg’s 160 licensed battlefield guides, or both, as we did.

“For many people, Gettysburg is such a significant event in our nation’s history, and it actually in some ways defines who we are as Americans today because of the tremendous crisis of that battle,” she said. “It can be a tremendously moving place.”

CAR AND BUS TOURS: Bus tours are offered several times daily and can be booked in advance through http://www.gettysburgfoundation.org or 877-874-2478, or buy tickets same day at the visitor center, $30 for adults, $18 for children 6-12. Private car tours are $65 per car for up to six visitors in one vehicle, last about an hour and must be reserved at least four days in advance. 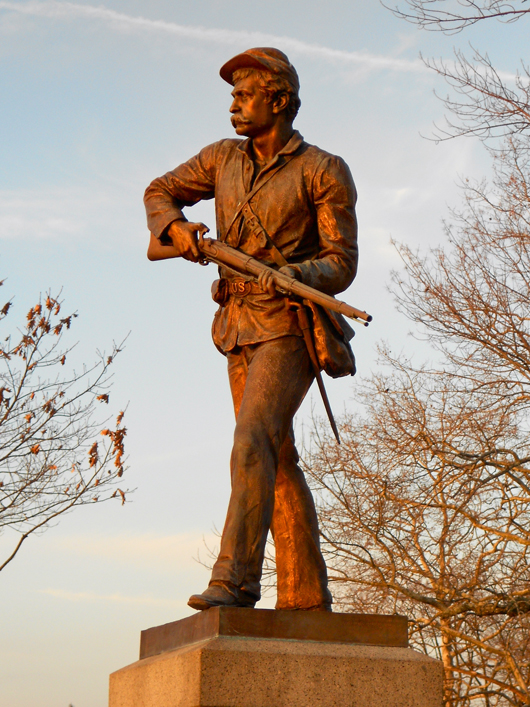 Famed ‘Electric Map’ of Gettysburg battlefield up for sale