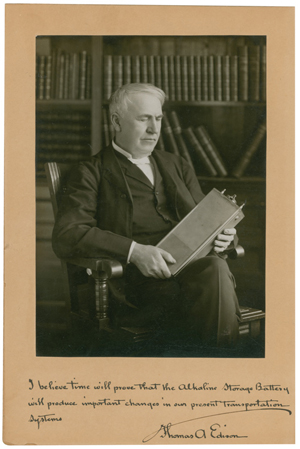 Photo of Thomas Edison holding his 1910 invention, the alkaline storage battery. The autographed photo sold at RR Auction for $32,310. Image appears with permission of RR Auction.

CANTON, Ohio (AP and ACNI) – An auction house says the owner of an Ohio plumbing company has paid a record price for an autographed photo of Thomas Edison.

David Grabowsky of Standard Plumbing and Heating of Canton tells The Repository he relates to the ideals, passion and tenacity of the fabled inventor.

Edison signed the photo with a prediction for the future: “I believe time will prove that the Alkaline Storage battery will produce important changes in our present transportation systems. Thomas A. Edison.”

Walter E. Holland is closely associated with Edison’s work on the battery. He was appointed Chief Electrical Engineer of the Edison Storage Battery Company in January of 1911, a position that set him in charge of the engineering, research, testing and service departments.

Holland had great respect for Edison, having begun working at the company right after high school. In 1910, he would publish his lab reports in The 1910 Edison Storage Battery: A Test of the Edison Storage Battery. Edison passionately believed in the power and usefulness of the alkaline battery. An avid automobile enthusiast, his initial inspiration behind the creation of the battery was to power an electric propulsion vehicle with a lightweight storage battery that would prove more efficient than the conventional lead-acid storage batteries. After a decade of research and development, Edison had his battery, but was too late to apply it to his initial subject; by the late 1890s, internal combustion engines ruled the automotive market.

Regardless, a variety of very profitable uses were found for his latest innovative offering, including the lighting of railway cars and signals, maritime buoys, and miners lamps. This invention would prove to be Edison’s most lucrative yet, as the alkaline battery would grow to become one of the world’s most commonly used energy sources, even today.

Information from: The Repository, http://www.cantonrep.com

Special thanks to RR Auction for technical information provided to Auction Central News in the preparation of this article. 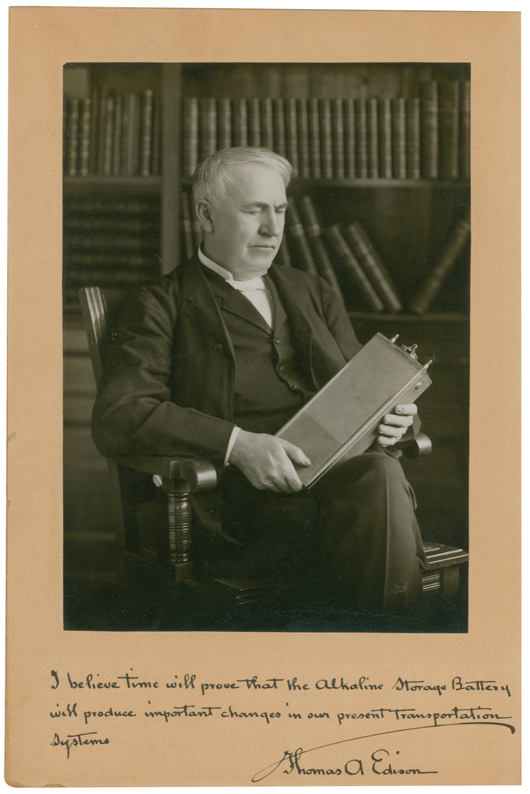 Photo of Thomas Edison holding his 1910 invention, the alkaline storage battery. The autographed photo sold at RR Auction for $32,310. Image appears with permission of RR Auction.

File cabinet reveals $250,000 worth of contents

Oyster wars cannon on display in Annapolis
Scroll to top