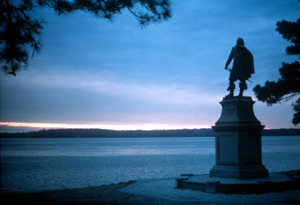 Nightfall over the James River and Jamestown, the site of the first permanent English settlement in the New World. Image by National Park Service, Colonial National Historic Park, and courtesy of Wikimedia Commons.

Jamestown Island, where most of Jamestown is located, lies 3 feet or less above the tidal James River. Scientists project that it will be underwater by 2100 but flooding will increase long before then.

Storms and erosion already have taken their toll. The island was created by an 18th-century storm that punctured a land bridge that once connected the Jamestown peninsula to the mainland. More recently, much of the island was flooded in 2003 by Hurricane Isabel, which damaged a visitor center and caused $3.5 million in damage to ceramics, metal tools and other artifacts in the center. In 2011, a seawall protecting Jamestown’s historic fort site was damaged by Hurricane Irene.

“What we’re seeing and what’s being predicted is the sea-level rise is going to exacerbate everything,” Dorothy Geyer, the natural-resource specialist for the Colonial National Historical Park, told the Richmond Times-Dispatch.

Most of the 1,473-acre island lies within the park. A 221/2-acre area that includes the original fort site and a 17th-century church tower is owned and managed by the nonprofit Preservation Virginia.

Geyer said National Park Service is working to determine how to adapt, looking at current studies and planning additional research.

Preservation Virginia also has taken steps to protect Jamestown. When storms approach, its plan calls for sandbags to be placed around the fort and church areas. To guard against flooding, an archaeology museum and some other buildings constructed in recent years were elevated.

“We believe we are one of the most important sites in America, the first permanent colony, and it is our goal to preserve this for future generations,” said Sheryl Mays, director of operations for Preservation Virginia at Jamestown.

That future could be grim. In 50 to 100 years, lands that the colonists walked on “are not going to be there anymore,” said Carl Hobbs, a marine geologist with the Virginia Institute of Marine Science.

“You can only fight nature for so long, because she will win,” Hobbs said.

Unlike other low places threatened by rising seas, the solution is not moving buildings and people. Jamestown is comprised of wild marshes and historic sites that still contain artifacts underground.

Two environmental groups, the Rocky Mountain Climate Organization and the Natural Resources Defense Council, warned in a 2010 report that Jamestown is in danger of being inundated by the river. Much of it could be washed away by rising water levels and stronger coastal storms before then.

“It’s a national park, built around a historic event, that we may only see through photographs in a few decades,” said Skip Stiles, director of Wetlands Watch, a Norfolk group raising concerns about rising sea levels. 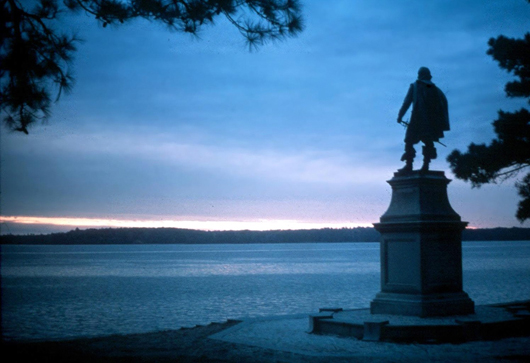 Nightfall over the James River and Jamestown, the site of the first permanent English settlement in the New World. Image by National Park Service, Colonial National Historic Park, and courtesy of Wikimedia Commons.

Bob Dylan voted into American Academy of Arts and Letters