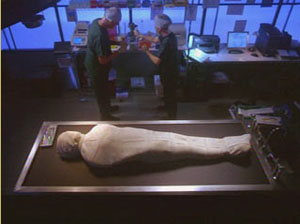 Modern medicine, including technology that allows mummies to be non-invasively examined via CT scan, is helping to solve some of the mysteries of Ancient Egypt’s civilization. The most recent CT scans taken of King Tut’s mummy are part of the Mummies Secrets of the Pharaohs exhibit that will open on Feb. 18, 2011 at the Science Museum of Minnesota. This image is a frame from the video about the exhibition that can be viewed online at www.smm.org/mummies/trailer. Copyright Mummies Secrets of the Pharaohs, Science Museum of Minnesota 2010.

ST. PAUL, Minn. (AP) _ Just in time for Halloween, the mummy at the Science Museum of Minnesota is getting a CT scan.

While the museum already has a scan and other X-ray studies from 1983, researchers hope to learn even more by using modern imaging equipment.

They hope to come away with a 3D model of the mummy’s inner workings and new details about his life, a more precise age and his cause of death. The results will debut ahead of the Feb. 18 opening of an exhibit on King Tut.

The mummy was donated to the museum in 1925. Researchers think he was a priest more than 3,000 years ago during ancient Egypt’s 18th Dynasty, which included King Tut.

Clocks are wound to get Fontaine’s Nov. 13 auction off to fast start
Scroll to top