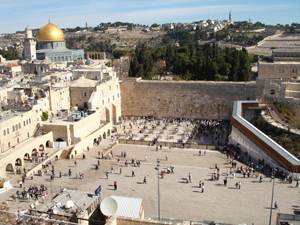 The Western Wall, located in the Old City of Jerusalem at the foot of the western side of the Temple Mount, is one of the most sacred sites in Judaism. This file is licensed under the Creative Commons Attribution-Share Alike 3.0 Unported, 2.5 Generic, 2.0 Generic and 1.0 Generic license.

JERUSALEM (AP) – Underneath the crowded alleys and holy sites of old Jerusalem, hundreds of people are snaking at any given moment through tunnels, vaulted medieval chambers and Roman sewers in a rapidly expanding subterranean city invisible from the streets above.

At street level, the walled Old City is an energetic and fractious enclave with a physical landscape that is predominantly Islamic and a population that is mainly Arab.

Underground Jerusalem is different: Here the noise recedes, the fierce Middle Eastern sun disappears, and light comes from fluorescent bulbs. There is a smell of earth and mildew, and the geography recalls a Jewish city that existed 2,000 years ago.

Archaeological digs under the disputed Old City are a matter of immense sensitivity. For Israel, the tunnels are proof of the depth of Jewish roots here, and this has made the tunnels one of Jerusalem’s main tourist draws: The number of visitors, mostly Jews and Christians, has risen dramatically in recent years to more than a million visitors in 2010.

But many Palestinians, who reject Israel’s sovereignty in the city, see them as a threat to their own claims to Jerusalem. And some critics say they put an exaggerated focus on Jewish history.

A new underground link is opening within two months, and when it does, there will be more than a mile of pathways beneath the city. Officials say at least one other major project is in the works. Soon, anyone so inclined will be able to spend much of their time in Jerusalem without seeing the sky.

On a recent morning, a man carrying surveying equipment walked across a two-millennia-old stone road, paused at the edge of a hole and disappeared underground.

In a multilevel maze of rooms and corridors beneath the Muslim Quarter, workers cleared rubble and installed steel safety braces to shore up crumbling 700-year-old Mamluk-era arches.

Above ground, a group of French tourists emerged from a dark passage they had entered an hour earlier in the Jewish Quarter and found themselves among Arab shops on the Via Dolorosa, the traditional route Jesus took to his crucifixion.

South of the Old City, visitors to Jerusalem can enter a tunnel chipped from the bedrock by a Judean king 2,500 years ago and walk through knee-deep water under the Arab neighborhood of Silwan. Beginning this summer, a new passage will be open nearby: a sewer Jewish rebels are thought to have used to flee the Roman legions who destroyed the Jerusalem temple in 70 A.D.

The sewer leads uphill, passing beneath the Old City walls before expelling visitors into sunlight next to the rectangular enclosure where the temple once stood, now home to the Al-Aqsa Mosque and the gold-capped Dome of the Rock.

From there, it’s a short walk to a third passage, the Western Wall tunnel, which continues north from the Jewish holy site past stones cut by masons working for King Herod and an ancient water system. Visitors emerge near the entrance to an ancient quarry called Zedekiah’s Cave that descends under the Muslim Quarter.

The next major project, according to the Israel Antiquities Authority, will follow the course of one of the city’s main Roman-era streets underneath the prayer plaza at the Western Wall. This route, scheduled for completion in three years, will link up with the Western Wall tunnel.

The excavations and flood of visitors exist against a backdrop of acute distrust between Israeli Jews and Palestinian Muslims, who are suspicious of any government moves in the Old City and particularly around the Al-Aqsa compound, Islam’s third-holiest shrine. Jews know the compound as the Temple Mount, site of two destroyed temples and the center of the Jewish faith for three millennia.

Muslim fears have led to violence in the past: The 1996 opening of a new exit to the Western Wall tunnel sparked rumors among Palestinians that Israel meant to damage the mosques, and dozens were killed in the ensuing riots. In recent years, however, work has gone ahead without incident.

Mindful that the compound has the potential to trigger devastating conflict, Israel’s policy is to allow no excavations there. Digging under Temple Mount, the Israeli historian Gershom Gorenberg has written, “would be like trying to figure out how a hand grenade works by pulling the pin and peering inside.”

Despite the Israeli assurances, however, rumors persist that the excavations are undermining the physical stability of the Islamic holy sites.

“I believe the Israelis are tunneling under the mosques,” said Najeh Bkerat, an official of the Waqf, the Muslim religious body that runs the compound under Israel’s overall security control.

Samir Abu Leil, another Waqf official, said he had heard hammering that very morning underneath the Waqf’s offices, in a Mamluk-era building that sits just outside the holy compound and directly over the route of the Western Wall tunnel, and had filed a complaint with police.

The closest thing to an excavation on the mount, Israeli archaeologists point out, was done by the Waqf itself: In the 1990s, the Waqf opened a new entrance to a subterranean prayer space and dumped truckloads of rubble outside the Old City, drawing outrage from scholars who said priceless artifacts were being destroyed.

This month, an Israeli government watchdog released a report saying Waqf construction work in the compound in recent years had been done without supervision and had damaged antiquities. The issue is deemed so sensitive that the details of the report were kept classified.

Some Israeli critics of the tunnels point to what they call an exaggerated emphasis on a Jewish narrative.

“The tunnels all say: We were here 2,000 years ago, and now we’re back, and here’s proof,” said Yonathan Mizrachi, an Israeli archaeologist. “Living here means recognizing that other stories exist alongside ours.”

Yuval Baruch, the Antiquities Authority archaeologist in charge of Jerusalem, said his diggers are careful to preserve worthy finds from all of the city’s historical periods. “This city is of interest to at least half the people on Earth, and we will continue uncovering the past in the most professional way we can,” he said. 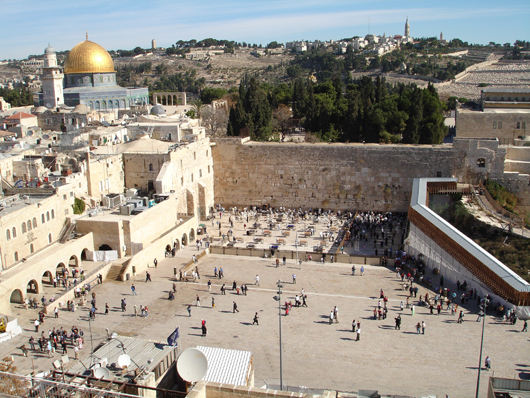 The Western Wall, located in the Old City of Jerusalem at the foot of the western side of the Temple Mount, is one of the most sacred sites in Judaism. This file is licensed under the Creative Commons Attribution-Share Alike 3.0 Unported, 2.5 Generic, 2.0 Generic and 1.0 Generic license.