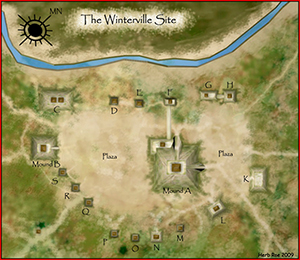 A map of the Winterville Site, a Mississsippian culture mound site near Greenville, Miss. Image by Herb Roe. This file is licensed under the Creative Commons Attribution-Share Alike 3.0 Unported license.

GREENVILLE, Miss. (AP) – Historians, tourism officials and others are pushing to get started on a multimillion dollar facelift at Winterville Mounds State Park north of Greenville.

They hope to expand the site and transform the museum into a contemporary and interactive history of Native American heritage in the Mississippi Delta.

The Delta Democrat Times reports that various organizations met this past week to discuss the area’s future.

Winterville Mounds is the site of a prehistoric ceremonial center built by a Native American civilization that thrived from about A.D. 1000 to 1450. The mounds, part of the Winterville society’s religious system, were the site of sacred structures and ceremonies. Archaeologists say the Winterville people lived away from the mound center on family farms in scattered settlement districts throughout the Yazoo-Mississippi River Delta basin.

The ceremonial center originally contained at least 23 mounds. Some of the mounds located outside the park boundaries have been leveled by highway construction and farming. Twelve of the site’s largest mounds, including the 55-foot-high Temple Mound, are currently the focus of a long-range preservation plan.

With the increase in interest in Native American history in recent years, Mark Howell, director at Winterville Mounds, said it’s time to expand the interpretive capabilities of the museum.

“It served its purpose 40 years ago,” he said. “It’s inadequate for what we need here today. We need more space. We want a museum that tells about the Native Americans who call Mississippi home.”

The park is located on 42 acres and has been in the state’s hands since 2000.

“There is a whole lot to remind people about the history of the area and the culture and heritage of the Native Americans, and that’s a whole new audience we could attract,” said Hank Holmes, executive director of the Mississippi Department of Archives and History.

Representing the Chickasaw Nation at the meeting and serving as a consultant about the new museum, Brady Davis said the exhibits need to remind people that Native American Indians are still a “viable group of people today.”

“Our culture is not lost,” he said. “People need to understand, and some do, that these people are still alive. They aren’t coming to learn about a history or see people who are gone.”

Brady said the Chickasaw Indians’ ancestry homeland was in northern Mississippi, though the new homeland is in south-central Oklahoma.

“The story of Winterville—and all of Mississippi’s Native American history from pre-Columbian time to today—is an interesting and important one. It’s a common perception that American Indians are only in the past, but we want to remind them and make them aware that they are still here,” he said. “The connection from past to present is really important.” 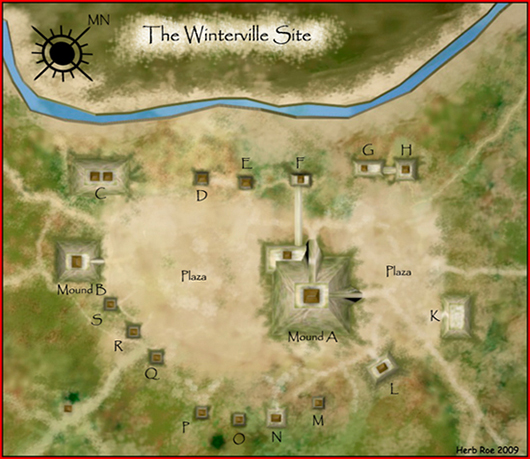 A map of the Winterville Site, a Mississsippian culture mound site near Greenville, Miss. Image by Herb Roe. This file is licensed under the Creative Commons Attribution-Share Alike 3.0 Unported license.