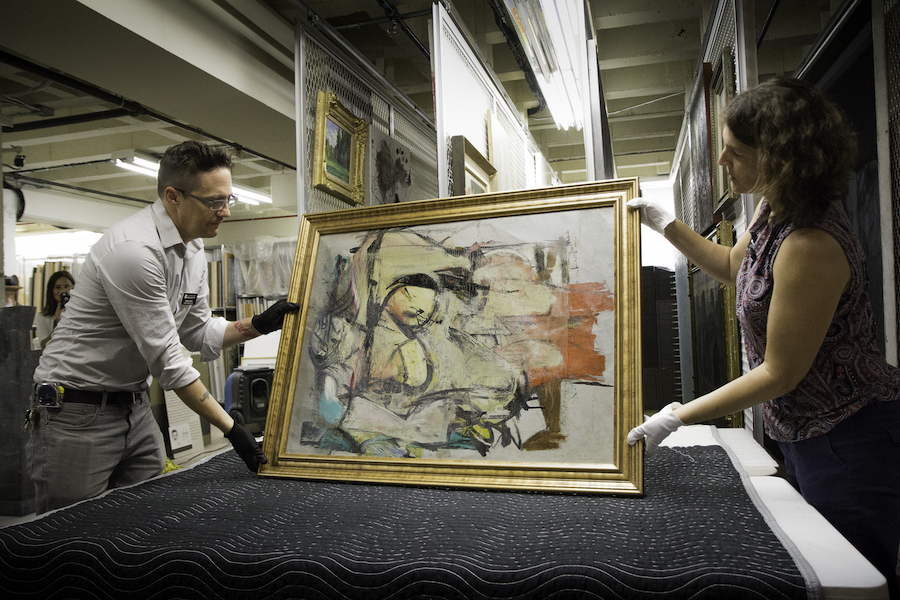 PHOENIX (AP) – After a Willem de Kooning painting worth millions was brazenly stolen in 1985 from an Arizona museum, the staff clung to the hope that it would turn up one day. But nobody could have predicted Woman-Ochre would find its way back through the kindness of strangers in a neighboring state.

“I would kind of imagine what would that look like,” said Olivia Miller, interim director and exhibitions curator at the University of Arizona Museum of Art in Tucson. “Would it just show up as a mysterious package in the mail or something like that? … I certainly never thought I’d make friends from it.”

The 1955 oil painting by the Dutch-American abstract expressionist is finally back home and ready to be shown. It will be the centerpiece of an entire exhibition opening Oct. 8 and remaining on view until May at the University of Arizona Museum of Art. The whole ordeal of the theft and its return in 2017 via New Mexico will be chronicled in the show. It has spent the past two years at the Getty Museum in Los Angeles for restoration work and display. The painting will be in the same spot it was stolen from – but under a case.

“That’s one of many security layers that it will have,” Miller said.

Almost like something out of a heist movie, the theft unfolded the morning after Thanksgiving. A man and a woman showed up at the museum where only a security guard and students working the front desk were present, according to the curator at the time.

The woman distracted the guard with small-talk while the man went to an upstairs gallery. He cut the painting right out of the frame, police said. The edges of the canvas were still attached. The entire heist lasted 15 minutes. He left with the painting rolled up.

There was no security camera system and no leads.

On the theft’s 30th anniversary in 2015, the museum displayed the empty frame at a news conference in hopes of generating tips.

A break in the case came in August 2017 when David Van Auker, his partner Buck Burns and their friend, Rick Johnson, bought the painting along with other items at an estate sale in Cliff, New Mexico. The trio own Manzanita Ridge, a furniture and antique store 40 miles (64 kilometers) away in Silver City. When they brought it back to the store, three different customers remarked how it looked like a real de Kooning. 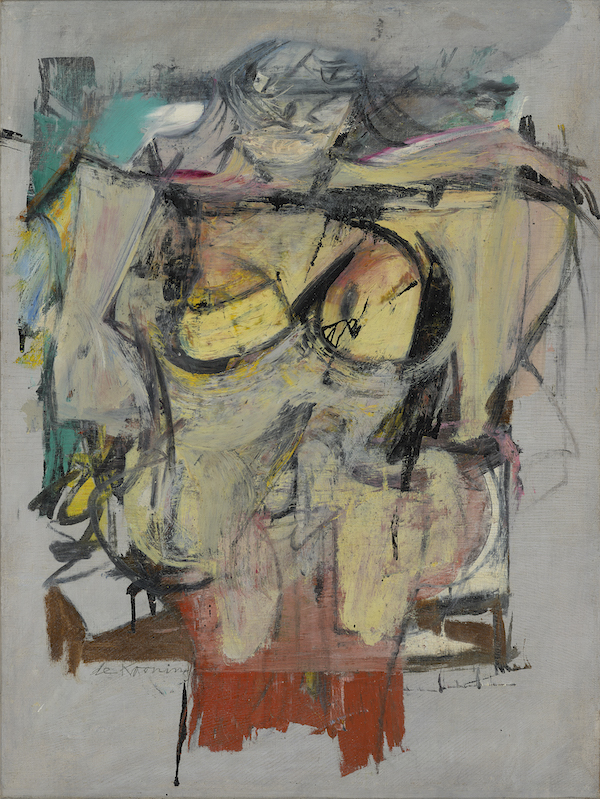 His interest piqued, Van Auker did a Google search. That led him to a 2015 article about the theft. They immediately attempted to contact Miller, University of Arizona and even the FBI, he said. But nobody got back to them right away.

Van Auker became terrified about safeguarding what could be the actual painting reportedly worth $100 million.

“I sat up all night with three guns and the painting behind a sofa,” he recalled. “I thought somebody would end up coming and killing us for this painting.”

He even left a voicemail for Miller making it clear that he was not interested in any reward or taking advantage of the situation. Miller found the voicemail endearing and wants to include it in the exhibition.

“My favorite part was he says something along the lines of ‘Put this on record. I want you to have the painting back. If it’s yours, the university’s – just come and get the painting,'” she said, chuckling.

Miller and a conservator with the university made the the three-hour drive from Tucson to Silver City the next day. They found there were enough indications to take the painting back for further verification. A conservator deemed it a real de Kooning. 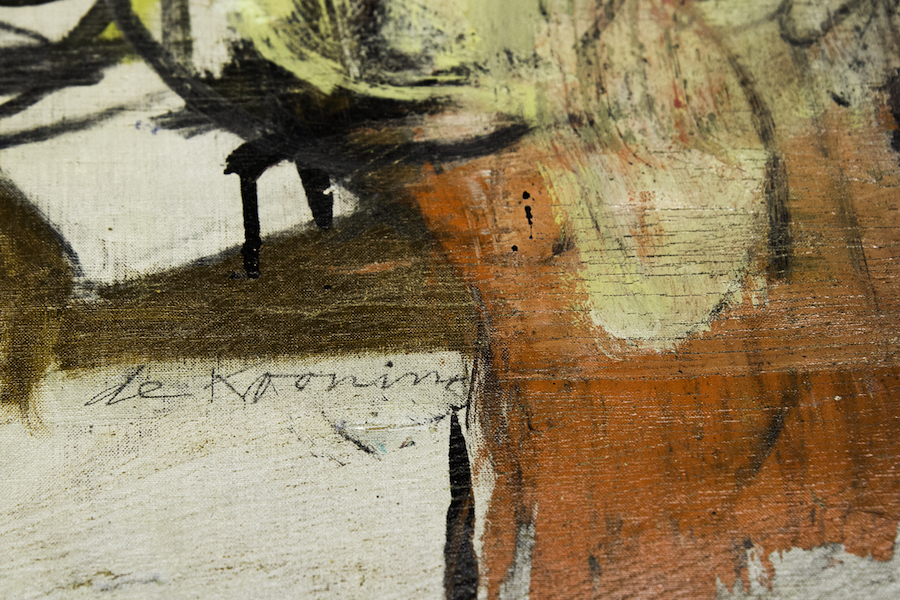 Its return triggered an FBI probe. But the case is now considered closed “following a thorough investigation,” Brooke Brennan, a spokeswoman for the FBI Phoenix office, said.

The estate the painting came from belonged to Jerry and Rita Alter. The art work had been hanging behind a bedroom door. Relatives also discovered a photo that showed the couple had been in Tucson on Thanksgiving Day in 1985. Jerry Alter died in 2012 and his wife in 2017. Authorities never publicly called them suspects.

Miller earlier this year met with the couple’s nephew. When the story first came out, he didn’t believe they could have committed such a crime.

“Now that the shock has worn down for him, he now can see that they could have been the ones who stole the painting,” Miller said.

Van Auker sometimes imagines if the painting had fallen into different hands in New Mexico. The thrill of playing a role in its return never fades. 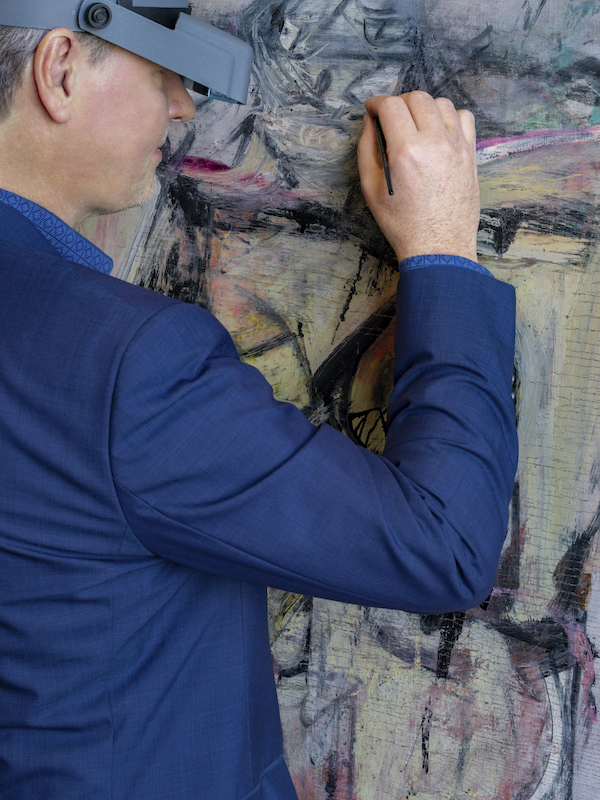 He definitely wouldn’t trade the experiences of the last five years for any money. His store’s business has doubled or tripled at times because people were touched by their actions. He, Burns and Johnson have been hailed as heroes at events in Tucson and the Getty Museum. They’ve stayed friends with Miller and the rest of the museum staff, even hosting them at their guest house back in Silver City.

Not a surprise considering what Van Auker said to Miller when she left with the painting back in 2017. 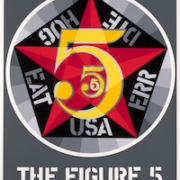 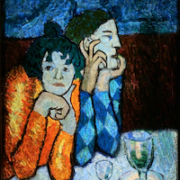