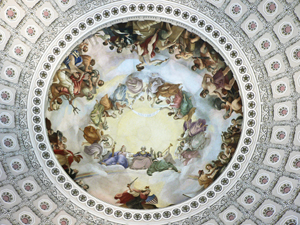 The fresco painted on the interior of the Capitol’s dome titled ‘The Apotheosis of Washington’ was painted by Constantino Brumidi in 1865. Image by user:Raul654.This file is licensed under the Creative Commons Attribution-Share Alike 3.0 Unported license.

WASHINGTON (AP) – A world-famous symbol of democracy is going under cover, as workers start a two-year, $60 million renovation of the U.S. Capitol dome.

Curved rows of scaffolds will encircle it next spring, enabling contractors to strip multiple layers of paint and repair more than 1,000 cracks and broken pieces. The dome will remain illuminated at night and partly visible through the scaffolding and paint-capturing cloths. But the Washington icon – and portions of the Rotunda’s painted ceiling that lies below – will be significantly obscured for many months.

The project is beginning just as the nearby Washington Monument sheds scaffolding that was used to repair damage from a 2011 earthquake.

Half-completed when Abraham Lincoln stood beneath it to summon “the better angels of our nature” in 1861, the Capitol dome has since towered over Washington, which limits building heights to 130 feet. Time, however, has let water seep through hundreds of cracks. The water attacks cast iron, which “continues to rust and rust and rust,” said Stephen T. Ayers, Architect of the Capitol.

This first major renovation in more than 50 years should add decades of structural integrity to the dome, which Ayers calls perhaps “the most recognizable symbol across the globe.” The $60 million undertaking will heal inner wounds, he said, without changing the way the dome looks from the ground.

Much of the work will be done at night and on weekends. It won’t be as flashy as the 1993 helicopter removal and return of the 19-foot Statue of Freedom from the dome’s top.

The Capitol’s crowning piece is actually two domes, one nested under the other like Russian dolls, and separated by a web of cast-iron braces hidden from view. From the ground it looks like a massive structure that would be too heavy for the building to support if it were indeed made of the solid stone it appears to be.

Instead it is cast iron painted to look like masonry. The lighter material and open space between the inner and outer domes create a physically sustainable structure. But it’s by no means puny.

The dome’s iron and masonry weigh 14.1 million pounds, said Kevin Hildebrand of the Capitol architect’s office. He led reporters up narrow, spiraling stairs that reach the Rotunda’s top, and then give access to the in-between world of girders separating the two domes. Ultimately the steps lead outdoors, to a panoramic walkway beneath the 12-columned lantern, or tholos, topped by the Statue of Freedom.

After a 1990 rainstorm left puddles on the Rotunda’s stone floor, workers found that bird nests had clogged gutters atop the Capitol, helping water penetrate outer walls and streak interior surfaces. Then they found bigger problems. Hundreds of cracks and pinholes in the cast-iron exterior added to the seepage.

“It is the symbol of our country,” Hildebrand said. “It is an icon that has to be preserved.”

The 150-year-old cast iron is low-quality by today’s standards, he said.

“It’s an archaic material,” Hildebrand said. A dome today probably would be built with glass and steel, he said. But Capitol workers must deal with relatively brittle iron that doesn’t respond well to welding.

First they must remove, capture and safely dispose several layers of lead-based paint. When they reach bare iron, they must quickly prime and paint it section by section, Hildebrand said, because it will “flash rust” in eight hours.

To mend cracks, workers will drill and tap damaged areas, and then insert steel pins. “Metal stitching” will complete the process.

Before repairing water damage inside the Rotunda, workers will hang a giant doughnut-shaped drop cloth just below the painted ceiling. Rotunda visitors whose necks can stand the crane will still see The Apotheosis of Washington through the doughnut hole. The 4,664 square-foot painting, 180 feet above the Rotunda floor, depicts George Washington becoming god-like, aided by figures from classical mythology.

“If these repairs are not made, the artwork in the Rotunda, including the Apotheosis of Washington and the Frieze of American History, are at great risk of damage due to water leaks,” says the Architect of the Capitol’s website. “There is only one Capitol Dome,” it says, and the office “is committed to preserving it for generations to come.”

The architect’s office will update the renovation’s progress at www.aoc.gov/dome. 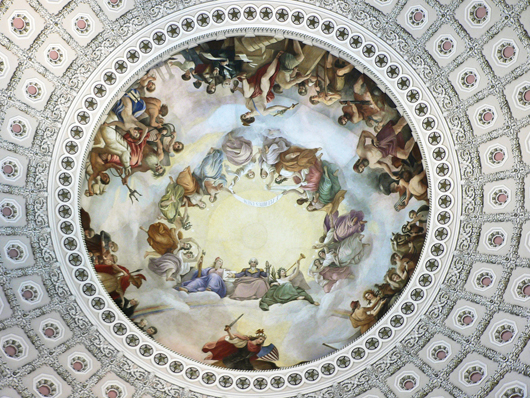 The fresco painted on the interior of the Capitol’s dome titled ‘The Apotheosis of Washington’ was painted by Constantino Brumidi in 1865. Image by user:Raul654.This file is licensed under the Creative Commons Attribution-Share Alike 3.0 Unported license.