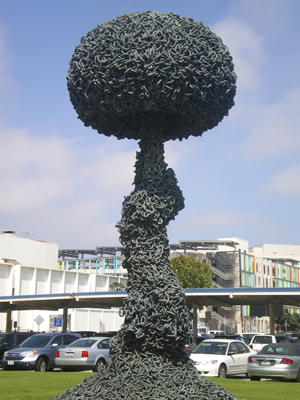 SANTA MONICA, Calif. (AP) – For decades the big, black mass of chain link that’s piled up outside the Civic Center has alternately awed and inspired, annoyed and confounded, and, perhaps most often, simply divided residents of this otherwise famously tolerant beach town.

Nearly three stories high and shaped like an atomic bomb’s giant mushroom cloud, Chain Reaction was sculpted out of copper, fiberglass and stainless steel as an enduring artistic statement against nuclear war. Its creator, the brilliant Los Angeles Times political cartoonist Paul Conrad, gave it to the city as a gift in 1991, and it has remained there, four blocks from the Pacific Ocean, ever since.

During that time, everyone from passing schoolchildren to inebriated rock concert patrons leaving the Santa Monica Civic Auditorium have climbed all over it. Others have mistaken it for a seal balancing a ball on its nose or the representation of a big tree. Armchair art critics have argued relentlessly over whether it’s a work for the ages or just a meaningless hunk of junk.

Whatever it is, city officials say one thing has become certain: After 21 years of people climbing over it and salt air from the ocean eating away it, Chain Reaction is in danger of falling down.

The city’s planning staff, estimating it could cost as much as $400,000 to fix, recently recommended that if proponents of the work can’t raise that money by November the city should simply get rid of it. In the meantime, they’ve put a fence around it (chain link of course) to protect the public.

Their proposal, however, has set off a chain reaction of its own across this 8.3-square-mile coastal city, with people from seashore bars to City Hall arguing over what to do.

“For many people it is an incredibly important symbol, an icon of Santa Monica,” said Jessica Cusick, the city’s cultural affairs manager. “For others, it’s junk and an eyesore.”

The new designation won’t necessarily save it from being hauled away if it can’t be made safe, Cusick said.

The work, made from huge links of chain big enough to secure a ship’s anchor, has developed noticeable cracks over the years. Some of the links have also begun to come loose and are teetering precariously.

The problem, Cusick said, is that although it has a stainless steel frame, the work is mainly supported by fiberglass, which is deteriorating.

“The materials that it was made out of were never designed for this use,” she said, adding that while fiberglass is fine for a museum piece, a sturdier material like bronze should have been used for an outdoor work.

The City Council, which has the final word on the sculpture’s future, will take up the issue in November.

So far, supporters have raised only about $2,500, but Conrad’s son, David Conrad, said he expects that to pick up now that the piece is a recognized historical landmark.

“It shows the gravity of this work and what a really cool thing it is,” he said.

“When it first came out my initial reaction was, `This is certainly—well—odd,’” Taylor, waiting at a bus stop just down the street from the sculpture, said as he rubbed his head and searched for the right word to describe it.

Around the corner, at the Vidiots video store, co-owner Patty Polinger is a huge fan of the sculpture, although she admits the first time she saw it her reaction was: “What is that?”

Since then she’s researched its history, come to embrace it as a great example of public art and even hosted a recent documentary screening in an effort to save it. The film, Paul Conrad: Drawing Fire, examines the life of the longtime cartoonist for the Los Angeles Times and Denver Post, who won three Pulitzer Prizes for work that skewered every major political figure of his era.

She acknowledges, however, that not everyone in the store shares her enthusiasm for the sculpting abilities of Conrad, who died in 2010 at age 86.

“One of our employees, who shall remain nameless, thinks it’s ugly,” she said with a smile.

From Day One, the work has evoked sometimes heated debate.

The City Council only narrowly voted 4-3 to accept Conrad’s gift, which former mayor Dennis Zane described at the time as an ugly non sequitur.

Before the vote, the public was asked to weigh in and responded 730-392 against accepting the work. The result was ignored amid concerns that Conrad critics had stuffed the ballot box.

“As was typical of my father, he had people that hated him,” his son recalled with a laugh earlier this week.

Indeed, the unabashedly liberal artist’s cartoons enraged many, among them the late Los Angeles Mayor Sam Yorty, who once sued Conrad, unsuccessfully, for a cartoon that implied he was a lunatic. President Richard Nixon famously put Conrad on his “enemies list” and Frank Sinatra once denounced him for making fun of President Ronald Reagan.

In arguing against keeping Chain Reaction, Santa Monica’s planning staff didn’t question Conrad’s greatness as a cartoonist, but said there was little evidence to show he was much of a sculptor.

That simply isn’t true, said his son, who noted his father created numerous bronze works of historical figures, including Martin Luther King, Robert Kennedy and Abraham Lincoln. Many were done in a serious style, although Conrad portrayed Reagan as Robin Hood, maintaining he robbed from the poor and gave to the rich.

“He also did a fair amount of public art,” said David Conrad, adding his father’s work graces churches in Southern California, as well as the Los Angeles Memorial Coliseum.

As for what his father would think of all the hoopla Chain Reaction has kicked up again, Conrad thinks he’d enjoy it.

“He sure loved stirring things up.” 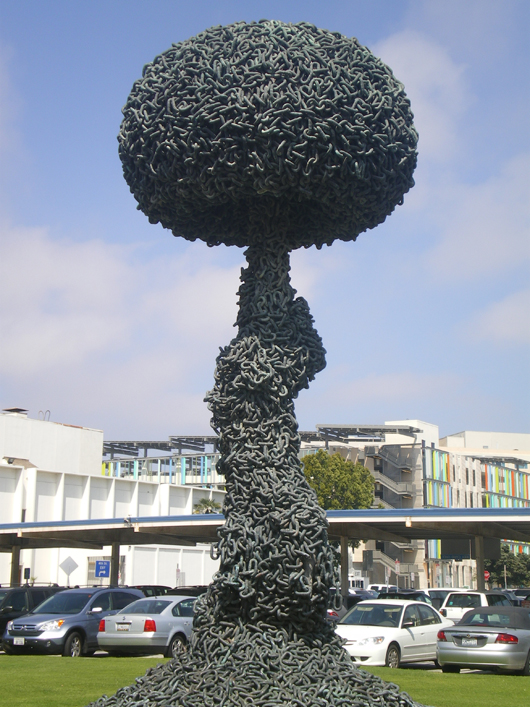