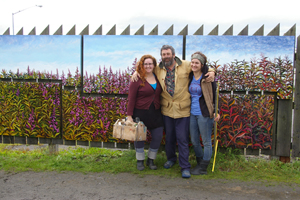 Dan Coe, center, stands with the assistants who helped him paint the fireweed mural, Karen Simpson, left, and daughter Rachel Coe, right. The six-panel mural shows the progression of fireweed from flower to fluff over the growing season. Image by Michael Walsh.

HOMER, Alaska (AP) – As summer slides into fall, Alaskans track the fading of the season by an iconic flower and plant: the persistent, sturdy fireweed. Weeks ago, fireweed lost its flowers and has now gone to fluff, its stems and leaves turning into red tinged with golden. Only summer-long visitors or residents can actually see that transformation. Thanks to a new mural by Homer artist Dan Coe, that change has been visualized. Coe installed the six-panel mural in late August on the Driftwood RV Park fence on Bunnell Avenue.

“We kind of mark our summers by fireweed,” he said of his mural.

Coe’s mural is the first of several works of art in Bunnell Street Arts Center’s Old Town AIR, or artist in residence, project. Funded by a $150,000 grant from ArtPlace America, Old Town Air seeks to inspire and create art and artistic events in the historic neighborhood south of the Sterling Highway near Bishop’s Beach. Poet Wendy Erd also is doing a residency, “Poetry on the Trail,” to create poems in place along the Beluga Slough trail.

The idea for a mural came when Coe visited Bunnell Street Arts Center earlier this year and talked with director Asia Freeman about Old Town AIR. Freeman mentioned putting a mural on the Driftwood RV Park that’s just across the street from the arts center.

“It went from there. It was talking to Asia Freeman that started the whole thing,” Coe said.

Like many Homer artists, Coe, 51, aspires to create and make a living from fine art. But also like many Homer artists, he makes money from commercial applications of his art, mainly painting custom signs. Through his business, Handpainted Design, Coe has done more than 100 signs on the lower Kenai Peninsula.

Coe and his wife Nancy moved to Alaska in 2001 and later to Homer in 2004. Coe learned the art trade growing up in Pennsylvania. In the 1980s with his friend Alex Hutnik, he started a custom tie-dyed clothing business called the Baba Klub. He later worked the night shift for the Monroeville Penny Saver, drawing ads for the paper. During the day he painted landscapes on otherwise plain wood furniture. Customers began demanding northwest images.

In 2000, Dan and his wife Nancy visited Alaska to see the source of those images and then moved here with their family in 2001. They now have nine children, six still at home. As with many Homer residents, all it took was rounding the hill to fall in love with Kachemak Bay.

Dan Coe first became known for his handpainted furniture. Later, after a commission to paint a sign for the Pregnancy Center on Bartlett Street, Coe moved into sign painting. He was conscious of the niche artist Brad Hughes had carved painting custom signs, but Hughes said he didn’t want to do that anymore. Coe asked Hughes for tips on painting signs and learned techniques like what kind of material to use and how to paint signs that could stand up to Homer’s wet and cold winters. He credits Hughes for much of what he learned about the craft of painting signs.

Unlike traditional sign makers, Coe doesn’t hand letter his signs. Rather, he designs the signs with images and lettering and paints the entire thing.

“Basically, all my signs have been paintings of signs,” Coe said.

For each sign and customer, Coe tries to make the sign original and not like other signs. While the signs have a utilitarian aspect, they also have fine art elements.

“I guess it’s a passive-aggressive way of getting people to view my art,” he said.

After the installation on Aug. 29, Coe talked about painting the mural and how he incorporated sign-painting techniques into it. His initial idea had been discrete panels of fireweed. He kept the idea of separate panels, but with the images connected. Moving from left to right, the painting changes from new green stalks to flowers and then fluff.

His idea, Coe said, was “to capture the experience of fireweed, the movement, the way color changes, the way the blossoms flutter.”

Coe sketched out a 14-inch-by-16-inch mock-up of the design, and then using a graphics program, took a digital image and stretched it out to 205-inches-by-17-inches and broke it up into panels. From that he printed it out as a collection of 8 1/2-inch-by-11-inch prints.

“This is the dirty little secret of how I make signs,” he said.

With his assistants, Karen Simpson and his daughter, Rachel Coe, he taped together the prints so he had one big print. Using carbon paper, they then traced the big print onto medium density overlay, or MDO, board. Coe credited his assistants with much of the work on the mural, including installation.

“I guess I kind of do old world using new-school methods,” he said.

Simpson and Rachel Coe then did the underpainting using Payne’s gray acrylic paint, a dark indigo color. Coe painted the finer details over that. He purposely went wild with the fireweed leaves, using classic impressionistic techniques, he said.

“You stand in front of them and they’re psychedelic,” Coe said. “This outdoor installation art is pretty cool.”

Coe could have done one giant mural, as he did on the east wall of AJ’s OldTown Steakhouse. Instead, he went back to his newspaper advertising roots, and broke the image up into panels. That concept—where information comes across in blocks of text or art—has become pervasive in modern graphic art, such as smart phone apps or website design, he said. The fireweed mural is something like a giant comic strip.

“I think the panel way of doing murals is really cool,” Coe said. “Media is commonplace. Art is the exception.” 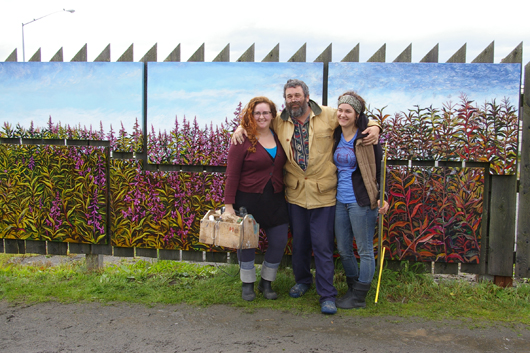 Dan Coe, center, stands with the assistants who helped him paint the fireweed mural, Karen Simpson, left, and daughter Rachel Coe, right. The six-panel mural shows the progression of fireweed from flower to fluff over the growing season. Image by Michael Walsh. 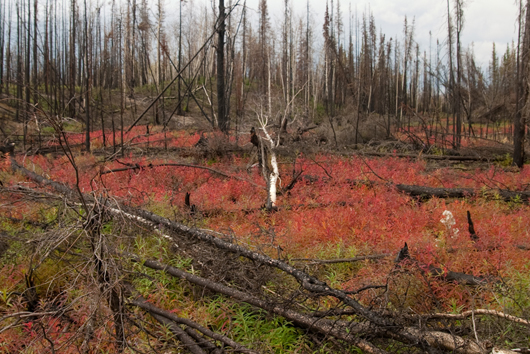 Fireweed as it appears in the fall near a roadside in Alaska. Image by Joseph N. Hall, courtesy of Wikimedia Commons.