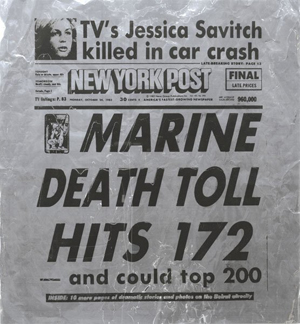 WASHINGTON (AP) – Andy Warhol is known for soup cans and celebrity images, not so much for painting headlines and abstract works.

The late pop artist has left much to be discovered in two shows that open Sunday on the National Mall.

The National Gallery of Art is opening its first Warhol exhibit with “Warhol: Headlines,” an examination of his use of news headlines throughout his career. At the same time, the Smithsonian’s Hirshhorn Museum will feature Andy Warhol: Shadows, a 450-foot-long installation in the round museum that marks the first time all of Warhol’s 102 abstract “shadow” paintings will be shown together as the artist intended.

Besides his obsession with celebrities and iconic images, it turns out Warhol was a news junkie. At a time when nearly everyone on the New York City subway had a newspaper in hand, Warhol was watching, fascinated by the consumption of news.

“Probably for him, it was like a kid in a candy store,” said Matt Wrbican, archivist at The Andy Warhol Museum in Pittsburgh, Warhol’s hometown. “He was a news hound.”

Soon Warhol was sketching his own versions of the New York Daily News, the National Enquirer and The Wall Street Journal in the 1950s, mimicking their layouts and tweaking their headlines.

His first painting of a front page, A Boy for Meg, in 1962 is a near exact replica of a New York Post page announcing the first-child born of Princess Margaret in Britain.

Warhol used a projector to trace the newspaper with his brush, though he left out the Post’s copyright line. Such work was a precursor to later artists who have been sued for similarly tracing news images.

The piece inspired curator Molly Donovan of the National Gallery of Art to look closer at Warhol’s use of the news.

“By enlarging the front page of the tabloid source on which it’s based, this painting signifies the immediacy Warhol conveyed in his art and tells us that something as mundane as the daily newspaper can indeed be grand,” she said.

Donovan eventually brought together about 80 paintings, drawings, prints, photographs, sculptures and videos from Warhol’s career that carry the theme. Forty percent of them have not been shown publicly before.

The works include a commissioned piece from 1981 to commemorate an Italian earthquake. Warhol blew up a newspaper headline reading “Fate Presto,” which translates to “Hurry Up,” to emphasize the human toll. It is being shown in the U.S. for the first time.

“Headlines” will be on view until January when the exhibit travels to the Museum fur Moderne Kunst in Frankfurt, Germany, followed by the Galleria nazionale d’arte moderna in Rome and The Andy Warhol Museum in Pittsburgh.

Another of Warhol’s most overlooked pieces, Flash, is on view in full for the first time, Wrbican said. Warhol created the installation in 1968 to mark the fifth anniversary of President John F. Kennedy’s assassination. It includes teletype newswire accounts from The Associated Press and others, along with 14 images to show how news of Kennedy’s death unfolded.

The show closes with a nod to Madonna. In 1985, Warhol teamed up with Keith Haring to make a wedding gift for their friend before her marriage to Sean Penn. They replaced a New York Post image on the front page with a picture of the couple under the headline: “Madonna on nude pix: So What!”

At the Hirshhorn, curators timed the “Shadows” exhibit to coincide with the “Headlines” show, as well as a film festival and other events.

Warhol created his colorful Shadows in 1979 as a play on abstract expressionism, Hankins said. He did it his own way, though, painting his silkscreen images with a mop. That began nearly 10 years of other abstract works.

“I’ve come to realize we’re just beginning to understand this prolific artist’s work,” Donovan said. “I’ll never be able to glance casually at the tabloids in the grocery store again.”