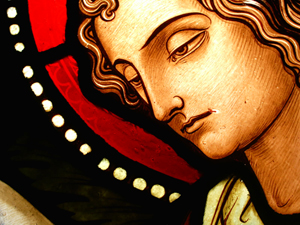 Detail from a 19th- or 20th-century window in Eyneburg, Belgium, showing detailed polychrome painting of a face. Image by Lusitana. This file is licensed under the Creative Commons Attribution-Share Alike 3.0 Unported license.

PEORIA, Ill. (AP) – No one knows who made the first stained glass windows. Some of the earliest examples date to the first century.

And while the materials have improved since then, the tools used by stained glass artists have changed very little.

“We had an artist once who told me that if you brought a stained glass artist from the 1600s and set him down at my bench, he would feel right at home,” said Carl Iverson, special projects manager for Reinarts Stained Glass Studios Inc. in Winona, Minn. “It’s one of the few industries that still does it a lot of the way it was done in the past.”

Reinarts has worked in many churches in central Illinois, including St. Joseph Catholic Church after a 2005 fire destroyed one window behind the alter and badly damaged another. A third window was also redone so it would match the two newly restored panels.

“When the windows get heated up too much, it actually makes the glass brittle,” Iverson explained. “When you take the glass out of the lead, it actually disintegrates.”

Workers used the resulting piles of glass to select new glass when they re-created the windows. Matching old glass is tricky because each batch of glass varies. In addition, there are types and colors made 100 years ago that aren’t produced today.

“It’s not like paint where you can say, ‘Mix me this color up,’” Iverson said. “Glass is manufactured differently today. There’s less hand-blown glass and more mechanically made glass.”

The windows Reinarts re-created for St. Joseph were figure windows, with the images of Matthew and Mark painted on the glass. They were made by an artist using a special type of paint which, when heated in a kiln, fuses to the glass. The process creates nuanced images and forms that would be impossible to make with cut glass and leading.

“The paint is actually made of glass,” Iverson said. “You paint it on and then you take off what you don’t want. When you’re working with a figure, especially on a face, you may fire it 10 times. The painting is created in stages.”

The skills are so specialized that each window is created by a team of artisans. At Reinarts, one person paints just the hands and faces. Another artist paints the robes and background details. Another person does the design and layout, and yet another selects the glass and assembles the window.

That’s the main reason why stained glass windows are so expensive, Iverson said.

“There is no margin for profits,” he said. “Everything is done by hand, and labor has gone up over the years.”

Expense was an important factor to the Rev. Larry Zurek when he took on the task of restoring Sacred Heart Church in 2005-06. The restoration, done shortly before the church’s 100th anniversary, undid an earlier renovation from the 1960s.

At that time the building’s original stained glass windows, in need of repair, were instead replaced with modern stained glass.

“It was the trend to make things look new,” Zurek said.

Pastor at both Sacred Heart and St. Joseph Catholic churches, Zurek has a deep admiration for beautiful stained glass windows. They not only create colored light, but also tell a story.

“It’s a way of sharing the faith,” he said. “We say a picture paints a thousand words. In the Middle Ages, when people couldn’t read or write, the windows told a story.”

“I went there during the process,” Zurek said. “I was really worried about the faces. That’s where the art is. The higher quality artist is the one who does the face.”

Zurek was quite pleased with the way the windows turned out, but he still speaks of his other church when talking about magnificent stained glass.

Built in 1879, St. Joseph is the oldest Catholic Church in Peoria. In the early 1900s, the congregation, mostly German immigrants, ordered elaborate windows from an art glass studio in Munich, Zurek said.

Like many churches, the congregation could only raise enough money initially to build the structure. The more ornate windows came later to replace the less complex windows installed when the church was built.

Several of the original windows are still in use above the front doors and in the choir loft. The three windows rebuilt after the 2005 fire are also original, Zurek said.

While the church’s oldest windows are nice, those made later in Germany are masterpieces. Each tells a story, depicting the important events in the life of Jesus Christ – the joyful, sorrowful and glorious mysteries of the Rosary.

“It’s amazing,” said Zurek as he stood recently in the empty sanctuary of St. Joseph gazing at the image of Jesus in the manger. “A lot of time, a lot of love, were put into these windows. We are so fortunate that we didn’t lose them in the fire.”

Closing the church was considered after the fire, Zurek said. Once filled with a vibrant congregation, the church is surrounded by a deteriorating neighborhood and has, in recent years, lost attendance.

The windows were one of the reasons leadership chose to go ahead with the $1.3 million repair of the building. Zurek believes it would likely have been razed if the windows had not survived the fire.

While attendance during a normal service is small, on Christmas Eve the old building once again overflows as family members return to celebrate in the church of their youth.

“An old church speaks more to them than a modern place,” Zurek said.

Some days Zurek comes to the empty church to pray the Rosary. While gazing at the old windows he occasionally discovers details in the intricate designs he hadn’t noticed before. As the light filters through the colored glass, Zurek enjoys a feeling of reverence.

The stained glass windows are a big part of that.

“It’s kind of like heaven breaking into our world.” 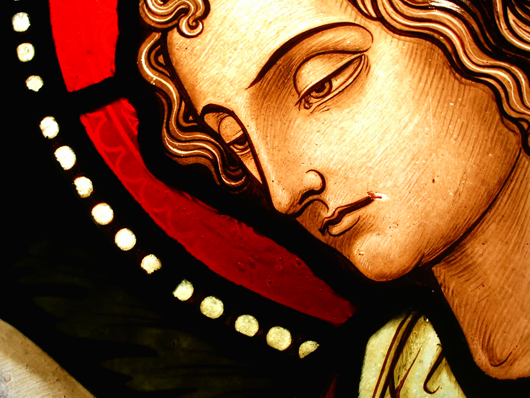 Detail from a 19th- or 20th-century window in Eyneburg, Belgium, showing detailed polychrome painting of a face. Image by Lusitana. This file is licensed under the Creative Commons Attribution-Share Alike 3.0 Unported license.