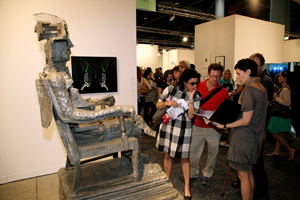 The Art Nova section of Art Basel Miami Beach is designed for galleries who wish to present new works from the artists they represent. The art is recent, sometimes fresh from the studio. This image from the 2007 Art Nova captures a crowd near the exhibition space for Salon94, New York. Photo copyright 2011 MCH Group Ltd. All rights reserved.

MIAMI (AFP) – Miami, once known mostly for its abundance of palm trees and bikinis, is forging a new identity as a world arts capital as it hosts the Art Basel fair, attracting collectors and aficionados from around the globe.

Beginning on Thursday and running through the weekend, Miami’s edition of Art Basel – billed as the most prestigious art show in the Americas – will welcome some 50,000 visitors.

This year marks the 10th anniversary since this American city with a distinctly Caribbean vibe first hosted Art Basel Miami Beach, thousands of miles from its founding city of Basel, Switzerland.

“People from all over the world come here, especially from Europe,” said Cristina Grajales, a gallery owner who originally hails from Colombia, but who now resides in New York and has come to Art Basel Miami for each of the past seven years.

More than 260 of the world’s top galleries from North America, Europe, Latin America, Asia and Africa will showcase works from more than 2,000 artists.

The exhibit runs parallel to another major happening – Design Miami, a separate exhibit focusing on interior decoration and decorative arts, which also draws thousands of visitors.

Those attending Art Basel will include some of the world’s most well-heeled art investors, many of whom appear to be impervious to the global economic downturn.

In fact, sales have been steadily rising since 2009 and organizers said they expect the trend will continue this year, as investors seek a safe haven from global turmoil.

Gallery owner Marco Berengo, who said that for the most part the attendees “don’t really feel the impact of the financial crisis,” as they set about the business of making new acquisitions for their collections.

“Every single event around Art Basel and Design Miami attracts collectors from around the world, seeking all sorts of art and furniture design, are very valuable customers and they are not affected by the economic crisis,” said Berengo, executive director of the Italian gallery Venice Projects.

The 43rd edition of Art Basel is to be held in the Swiss city next June.

The offshoot in hip, tropical Miami meanwhile melds the sensibilities of both cities, even if the marriage on the surface seemed a bit unlikely.

Miami investors years ago were eager to rehabilitate the tattered image of the city, known at the time mostly as a retirement destination for the elderly and a haven for drug dealers.

As organizers of the Basel event set about seeking a warm weather venue for the winter months, and semi-tropical Miami seemed a good fit.

“Art Basel Miami Beach is much more than an art fair,” said artist Javier Martin, 26, whose works were on display at the Baltus gallery.

“It also represents a movement, where artists can express their ideas, their thoughts, via a very contemporary approach.

Martin’s plastic works, some of which sell for more than $5,000 apiece, are meant to be a “social critique on how things are going from all different angles of society.”

Establishing Art Basel as an annual event here has helped revitalize the city, creating a thriving arts scene in some formerly impoverished neighborhoods.

The event has also helped raised the profile of Miami as a truly international destination and helped to reinvent this once-downbeat parts of this city that was once besieged by drug crime and berated as vapid and anti-intellectual.

The new cottage industry also has given a shot in the arm to the city’s museums and universities, and has helped shore up sagging real estate values

The event this year will see hotels and restaurants reap some $11 million dollars, a four percent increase over 2010.

And Miami being Miami, the event is also an opportunity for high fashion events, including some of the international glitterati’s most breathlessly awaited parties.

The weekend calendar includes an art show sponsored by Louis Vuitton, with special libations supplied by champagne maker Ruinart. Such well known international brands as Fendi, Audi and Veuve Clicquot also are also a visible presence, as they sponsor various receptions and other events during the four-day-long happening.

Meanwhile, the Miami’s main art museum is to host a formal ball, with attendees to include pop diva Gloria Estefan and other luminaries. 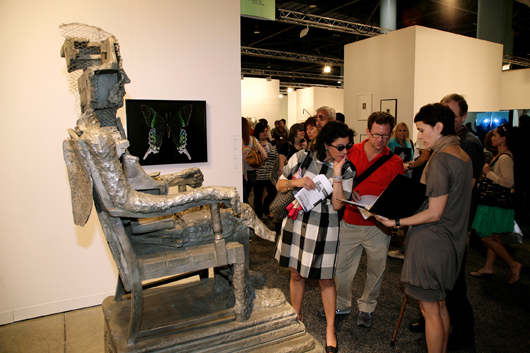 The Art Nova section of Art Basel Miami Beach is designed for galleries who wish to present new works from the artists they represent. The art is recent, sometimes fresh from the studio. This image from the 2007 Art Nova captures a crowd near the exhibition space for Salon94, New York. Photo copyright 2011 MCH Group Ltd. All rights reserved.