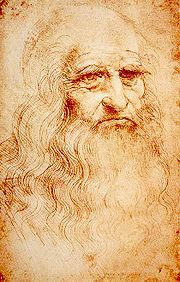 TORONTO (AP) – Mona Lisa has something new to smile about.

A portrait of a young woman thought to be created by a 19th century German artist and sold two years ago for about $19,000 is now being attributed by art experts to Leonardo da Vinci and valued at more than $150 million.

The unsigned chalk, ink and pencil drawing, known as La Bella Principessa, was matched to Leonardo via a technique more suited to a crime lab than an art studio – a fingerprint and palm print found on the 13 1/2-inch-by-10-inch (34 centimeters by 25 centimeters) work.

Peter Paul Biro, a Montreal-based forensic art expert, said the print of an index or middle finger matched a fingerprint found on Leonardo’s St. Jerome in the Vatican.

Technical, stylistic and material composition evidence – including carbon dating – had art experts believing as early as last year that they had found another work by the creator of the Mona Lisa.

The discovery of the fingerprint has them convinced the work was by Leonardo, whose myth and mystery already put him at the center of such best-sellers as The Da Vinci Code and The Lost Symbol.

Biro examined multispectral images of the drawing taken by the Luminere Technology laboratory in Paris, which used a special digital scanner to show successive layers of the work.

“Leonardo used his hands liberally and frequently as part of his painting technique. His fingerprints are found on many of his works,” Biro said. “I was able to make use of multispectral images to make a little smudge a very readable fingerprint.”

Alessandro Vezzosi, director of a museum dedicated to Leonardo in the artist’s hometown of Vinci, Italy, said Wednesday he was “very happy” to hear about the fingerprint analysis, saying it confirmed his own conclusion that the portrait can be attributed to Leonardo with “reasonable certainty.”

“For me, it’s extraordinary there is confirmation” through the fingerprint, although “it’s not like I had any doubt,” he said in a telephone interview with The Associated Press.

Even before the fingerprint discovery, Vezzosi said several experts agreed with his conclusion, which was based on “historical, artistic, stylistic (and) aesthetic” considerations.

Canadian-born art collector Peter Silverman bought La Bella Principessa – or The Beautiful Princess – at the gallery in New York on behalf of an anonymous Swiss collector in 2007 for about $19,000. New York art dealer Kate Ganz had owned it for about nine years after buying it at auction for a similar price.

One London art dealer now says it could be worth more than $150 million.

If experts are correct, it will be the first major work by Leonardo to be identified in 100 years.

Ganz still doesn’t believe it is a Leonardo.

“Nothing that I have seen or read in the past two years has changed my mind. I do not believe that this drawing is by Leonardo da Vinci,” Ganz told the AP on Wednesday. She declined to comment further.

Silverman said he didn’t expect Ganz to acknowledge it’s a Leonardo because that would damage her credibility, adding that if she wants to “go against science and say the Earth is not round,” then that’s her prerogative.
“Thank God, we have the fingerprint because there will still be those doubting Thomases out there saying it couldn’t possibly be and giving all sorts of reasons for it. We not only have a fingerprint, but a palm print.”

He said the palm print was found in the neck of the portrait’s subject, who is believed to be the daughter of a 15th century Milanese duke.

Biro said the two main ideas to emerge from the news are the discovery of “an important lost work by Leonardo,” and how “science, technology, scholars and art historians are learning to work together to solve these incredibly complex puzzles.”

Silverman said the Swiss collector first raised suspicions about the drawing, saying it didn’t look like 19th century artwork. When Silverman saw it at the Ganz gallery in 2007, he thought it might be a Leonardo, although the idea seemed far-fetched. He hurriedly bought it for his Swiss friend and then started researching it.

“Of course, you say, ‘Come on, that’s ridiculous. There’s no such thing as a da Vinci floating around,”’ Silverman said. “I started looking in the areas around da Vinci and all the people who could have possibly done it and through elimination I came back to da Vinci.”

Last year, Silverman asked Nicholas Turner, a former curator of drawings at the J. Paul Getty Museum and the British Museum. Turner said it was a Leonardo.

Silverman described the Swiss collector as a very rich man who has promised to buy him “lunch and dinner and caviar for the rest of my life if it ever does get sold.”

Vezzosi said the portrait seemed to be of a prospective bride and compared its purpose to today’s photos of clients of Internet matchmaking agencies.

As for the possibility of finding other Leonardo works, “there are thousands of lost works of Leonardo, mainly pages from codexes or drawings,” Vezzosi said, but discovering a lost or undocumented painting would be “much more difficult.”