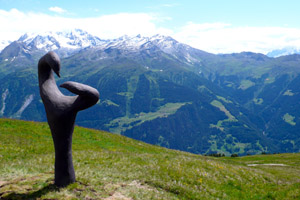 VERBIER, Switzerland (ACNI) – “Is it the altitude, or did I just pass a monumental sculpture?” Anyone skiing for the first time at the fabled Swiss resort of Verbier could be forgiven for wondering if the spectacular three-dimensional artworks that dot the mountainside in strategic locations are a mental illusion or the latest prank by Banksy. Actually, they’re neither. They’re site-specific artworks installed in what has been dubbed the “Museum without Walls” – an ambitious and permanent project developed by the 3-D Foundation.

Underwritten by government grants and corporate sponsorships – even the Swiss National Lottery stepped up to the plate – the Verbier 3-D Residency and Sculpture Park is the first-ever “platform for free public art in the Alps,” says founder Madeleine Paternot.

An accomplished artist in her own right, Paternot came up with the idea of an open-air mountainside sculpture gallery while completing a painting residency in New York. “I had always had an avid interest in public art, which is a massively growing sector, and after talking with other artists who were doing small residencies in other countries, I thought, ‘Why not express public, free art in Switzerland at a high altitude?’”

Paternot’s plan called for the establishment of fully sponsored 5-week residencies for artists whose works would then be installed as permanent displays in the sculpture park. The process of selecting artists annually for the honor of an all-expenses-paid residency began last July. “Most were artists with whom I already had contact and who were mid career, with a very good track record of shows and residencies. Paul Goodwin, a curator at the Tate, helped in selecting the British artists,” Paternot said.

But not just anyone can decide on a whim to erect statues on pristine Swiss mountain scapes. Paternot, who holds both Swiss and American citizenship, was already very well known and respected in the Verbier community, which gave her a decided advantage as she pursued her goal. “I have lived in Verbier for the past eight years fulltime, had done a lot of property development and also created a foundation to start an international school, so I was already a proven entity.”

During their residencies, artists do not have to worry about anything except being creative. In addition to having their transportation and living expenses covered, they’re given a budget for materials and studio space in the village of Verbier.

And on the subject of materials used by sculptors who work in large scale, getting those various, weighty materials up the mountainside has proved to be “an epic scramble,” Paternot admitted. “Next year we’ll get a truck sponsor.”

Local residents, students and tourists are given the opportunity to view the sculptures in progress, with the artists’ studio doors left open daily from 6 to 8 p.m. expressly for that purpose. Public access to the artists in their studios is an education aspect of the project and was critical to the foundation’s ability to secure funding.

After a sculpture is completed, it is cut to size so it can be fitted onto a base of natural stone, then airlifted by helicopter and permanently positioned. The park is in an environmentally sensitive area of the mountain, where high-altitude cows reside – farmers had to issue their approval of the project, as well. “The artworks must be installed in such a way that, if they were ever removed, there would be no trace that they had ever existed,” Paternot said.

Motor vehicles are not allowed to enter the area, but there are many other ways in which to arrive at the sculpture park. Because it is located at the midpoint of the mountain, the park can be accessed by trekking or downhill, off-piste or cross-country skiing. Another option is via dogsled.

A press launch was held on July 15, and the park is now officially open to the public. Artworks will remain in situ for an entire year so they can be viewed during all four seasons.

As for next year’s project, Paternot said there are already many applications from artists hoping to be chosen for a residency. Paternot, who is never short of a new idea, hopes to incorporate a VIP trip to next year’s Art Basel for the 2012 artists-in-residence. “That would provide a great networking opportunity for the artists, who would be able to meet the dealers who set up at Art Basel,” she said.

Nomadic by nature, Madeleine Paternot has lived all over the world, including New Zealand, Morocco, Andalusia, and the Swiss Alps.  She received a B.A. in Anthropology from Vassar College in 1995 and in 1996 attended the prestigious Art Center School of Design (Vevey, Switzerland) with a focus on Product Design. Kensington & Chelsea College (London) awarded Paternot a Higher National Certificate (HNC) in Fine Art in 1998. She has studied at the Art Student League and in 2009 completed a residency in Painting at the School of Visual Arts in New York.

Paternot was selected for “Swiss Art in the UK 2001” and showed at the Swiss Embassy in London. Over the past 12 years she has participated in multiple group exhibitions and more than a dozen solo shows, the most prestigious of which was held at Espace L’Hommond, run by the Schlumberger family in Paris (2006). Her work has appeared in private and public collections in London, Paris, Milan, Lausanne, Verbier, Boston, Dubai, County Kerry, Ireland; and New York.

She serves on the Board of Directors of the Heinemann Foundation for research, educational, charitable and scientific purpose. She is co-founder and president of the Verbier 3-D Residency and Sculpture Park.

To learn more about the Museum without Walls in Verbier, Switzerland, visit www.3-dfoundation.com. 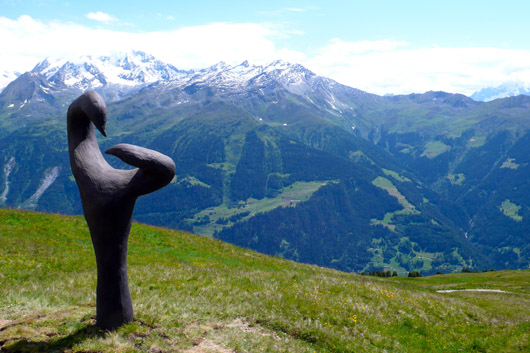 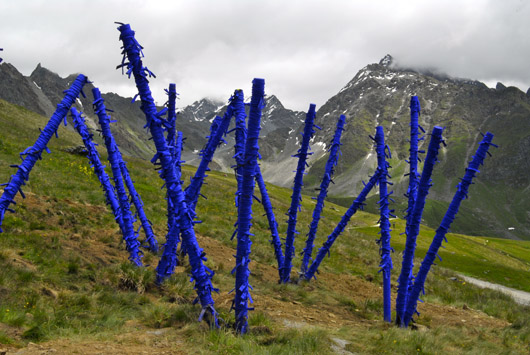 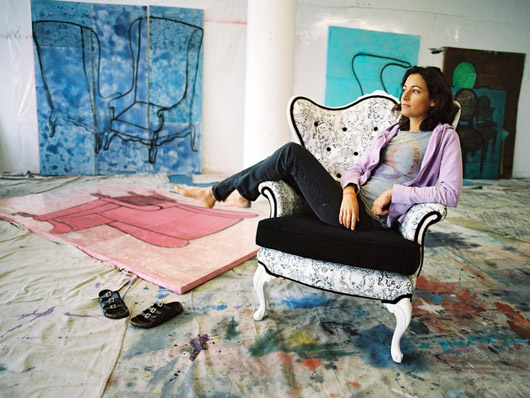 Specialists of the South to sell diverse Robertson collection July 30