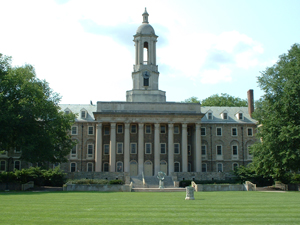 STATE COLLEGE, Pa. (AP) — The depiction of Jerry Sandusky on a well-known mural across the street from the Penn State campus has been replaced by an image of a poet and activist draped with a blue ribbon — a symbol for awareness of child sexual abuse.

Sandusky was removed from the mural days after his arrest in November. But Pilato returned to the work on Sunday, painting in Dora McQuaid, a Penn State graduate who is poet and advocate for domestic and sexual violence victims and issues. The blue ribbon was added on Monday.

Also replacing Sandusky were two red handprints — one belonging to Ann Van Kuren, one of the 12 jurors who convicted Sandusky and the other belonging to a sexual abuse victim.

Meanwhile, as Sandusky insisted through a lawyer Monday that he was not guilty, Van Kuren said she hoped the verdict would help his accusers heal.

Van Kuren said the jury found compelling the testimony of the eight victims who took the witness stand, and they weighed the accounts and evidence diligently before finding Sandusky guilty last week of sexually abusing 10 boys over 15 years. She expressed empathy for the young men who offered emotional and explicit testimony.

“I really feel for the victims and any other victims that are out there that haven’t come forward and told their” stories, Van Kuren told The Associated Press. “I’m hoping that this trial, with this verdict, will help them heal.”

The sweeping sex abuse case rocked the Penn State community and the resulting scandal led to the ousters of Sandusky’s former boss — Hall of Fame coach Joe Paterno — and the university’s president. It also forced a re-examination of the role that college administrators played in reporting abuse allegations.

Sandusky, 68, is under observation at the Centre County jail, where he is being kept away from other inmates pending a psychological review that will help determine the next step toward his sentencing in about three months.

“He’s defiant and wants the truth to be told. He wants people to know that he’s not guilty,” said defense lawyer Karl Rominger, who visited his incarcerated client Monday.

Also Monday, Judge John Cleland ordered county probation officers to evaluate whether Sandusky is a sexual predator, a finding that could factor into his prison placement. Such orders are pro forma in sex abuse cases. Sex offenders are required to undergo treatment while in prison, so Sandusky, if deemed a predator, would likely be sent to a facility with such a program.

Rominger told the AP that Sandusky said he’s not suicidal and that he wants to get the separate psychological examination done so that he can receive visits from his friends and family.

The state investigation into Sandusky didn’t begin until after the ex-coach was barred from a high school in 2009 when a mother complained about him. At the time, Gov. Tom Corbett was the state attorney general. Charges were filed in November 2011.

Investigators took into account Sandusky’s status as a celebrated assistant coach in building the case, Corbett said Monday when asked in Harrisburg why charges weren’t filed after the first accuser came forward.

Sandusky has repeatedly maintained his innocence. He will likely die in prison given mandatory minimum sentencing requirements.

The conviction is only just the start of possibly years of legal proceedings over the case. Besides appeals, there remains an active investigation into Sandusky by the state attorney general’s office as well as a federal investigation.

Corbett said Penn State trustees are still awaiting the results of an internal investigation by former FBI director Louis Freeh into the school’s handling of the Sandusky case.

The university could also face a wave of new civil lawsuits. An hour after the verdict Friday night, Penn State said in a statement it was inviting victims to “participate in a program to facilitate the resolution of claims against the university arising out of Mr. Sandusky’s conduct.” The school said it sought to address victims’ concerns privately, expeditiously and fairly.

Asked to clarify Monday, school spokesman Dave LaTorre said the university won’t discuss details about litigation or how much money might be set aside for potential settlements, and declined further comment. 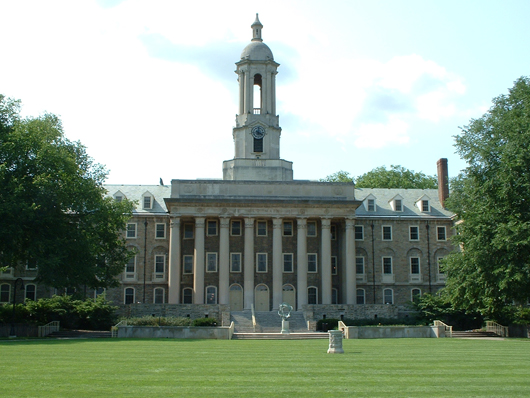 Maine artist laments removal of her mural; some call it censorship