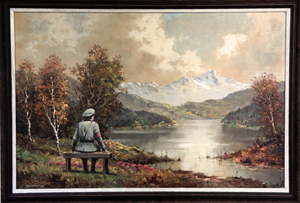 English artist Banksy’s ‘The banality of the banality of evil,’ a 2013 oil on oil on canvas. The thrift store painting was vandalized, then re-donated to the thrift store. It has been authenticated by Banksy and is being auctioned online to benefit the New York City charity Housing Works. Image courtesy of Banksy.

NEW YORK (AFP) – British artist Banksy has donated a “vandalized” oil painting to a New York thrift shop to raise hundreds of thousands of dollars for HIV patients and the homeless.

It is the latest stunt in the graffiti superstar’s month-long pop-up exhibition on the streets of the US city which has fascinated hipsters and enraged critics.

Bought from and donated back to the same charity shop run by Housing Works, which provides life-saving services to the homeless and HIV/AIDS patients, an online bidding war is now under way for the painting.

Bids opened at $74,000 and have already risen to at least $220,200 with some expecting them to reach $1 million by the time the auction closes Thursday evening.

Artworks by the England-based graffiti maestro, who has never been formally identified, can sell for hundreds of thousands of dollars in upmarket galleries.

Rebecca Edmondson, public relations director at Housing Works, described the gift as “pretty exciting” and told AFP all money raised would go to its charity programs.

“We’re constantly, constantly looking for funding… so anytime we get something so unexpected, so generous that can provide such immediate help…that’s always just a real gift to all of us and to our clients,” she said.

The gift was dropped off anonymously at the Housing Works store in chic Gramercy Park where two months earlier a customer had bought the original canvas for $50.

To the landscape of a lake, snow-capped mountains and autumnal trees, Banksy painted in a bench and a Nazi soldier sitting with his back to the viewer.

He renamed the picture “The banality of the banality of evil” and under the signature of the original artist, “K. Sager,” he added his own “Banksy” flourish.

It has been hung back in the Housing Works shop on East 23rd Street.

Edmondson said Housing Works had no idea who originally bought the painting but said a woman returned it on Tuesday morning.

“Pretty much simultaneously someone from the Banksy team contacted our visual team, which does our stores and windows, to let us know that it was authentic.”

It was Banksy’s intention to auction it off, Edmondson told AFP. His exhibition comes to an end on Thursday.

Housing Works, one of the biggest grass-roots aid organizations in New York, sees it as Banksy’s way of donating something of benefit for people in the city.

“We’re now more than $200,000. A couple of art folks have said to us this could go for a million. Already we’re happy,” Edmondson told AFP.

His “Better Out Than In” residency has attracted a cult following, but has enraged the owners of defaced property and has been criticized by Mayor Michael Bloomberg. 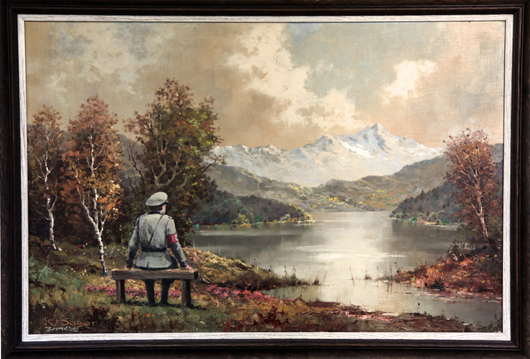 English artist Banksy’s ‘The banality of the banality of evil,’ a 2013 oil on oil on canvas. The thrift store painting was vandalized, then re-donated to the thrift store. It has been authenticated by Banksy and is being auctioned online to benefit the New York City charity Housing Works. Image courtesy of Banksy.