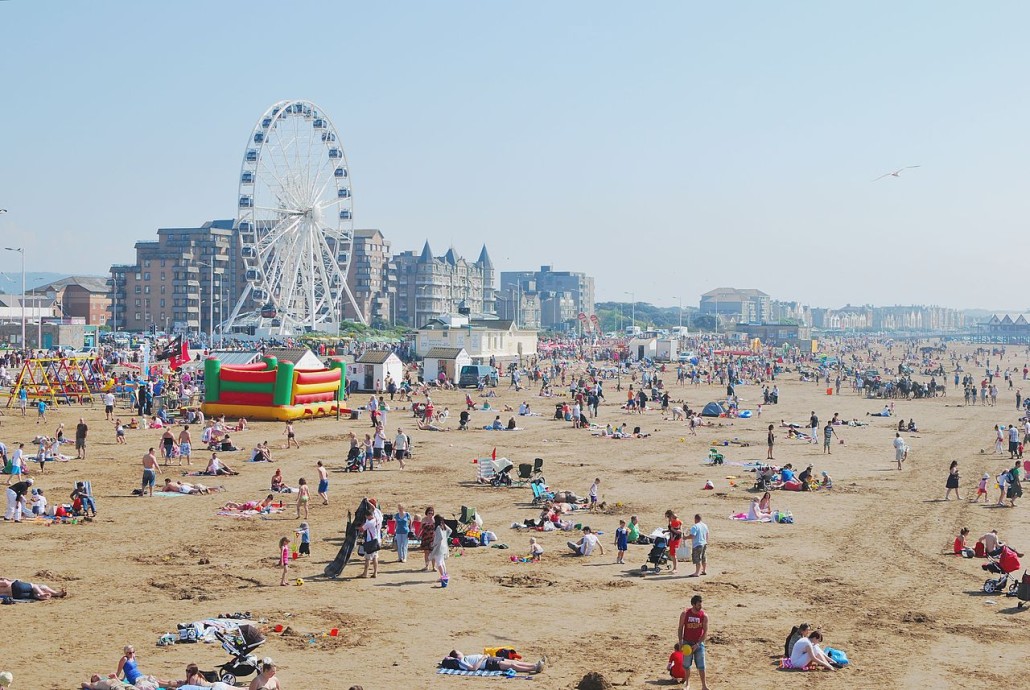 Weston-Super-Mare beach seen from the Grand Pier in 2011. Image by NotFromUtrecht. This file is licensed under the Creative Commons Attribution-Share Alike 3.0 Unported license.

Banksy’s Dismaland “bemusement park” transformed a derelict outdoor swimming pool in Weston-Super-Mare into a macabre parody of a theme park, complete with a derelict castle, a dead Cinderella and a Grim Reaper in a bumper car.

Local officials say the attraction, which closed Sunday after five weeks, drew more than 150,000 people to the southwest England town of 75,000.

Fans from around the world snapped up all available tickets – limited to 4,000 a day – for the event billed as a “festival of art, amusements and entry-level anarchism.” A final concert Friday night featured performances by De La Soul, Pussy Riot and Blur singer Damon Albarn.

Tourism body Visit Somerset said the exhibition had brought 20 million pounds ($30 million) to a region that has struggled since foreign vacations replaced local seaside holidays for many Britons.
Officials hope to use the shuttered site for future art and performance events.

Banksy said the project was not a swipe at Disney, despite its familiar-looking castle logo. It satirized the tourism and entertainment industries, with exhibits including a sculpture of a woman being attacked by a cloud of seagulls and a pond where visitors could steer model boats crammed with migrants.

The site also featured work by some 50 international and British artists.

The artist told the Sunday Times newspaper he was inspired by the seasonal theme parks that pop up at Christmas “where they stick some antlers on an Alsatian dog” and spray fake snow around.

“It’s ambitious, but it’s also crap,” he said. “I think there’s something very poetic and British about all that.”

Banksy, who has never disclosed his full identity, began his career spray-painting buildings in his home town of Bristol – near Weston – and has become one of the world’s best-known street artists. His often satirical works have sold for as much as $1.8 million at auction.