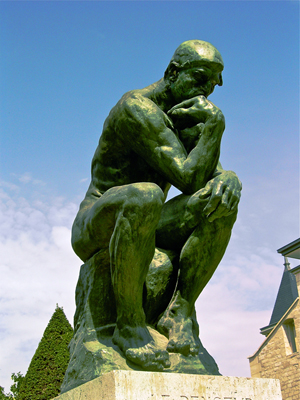 ‘The Thinker’ by Rodin located at the Musée Rodin in Paris. Image courtesy Wikimedia Commons.

LANCASTER, Pa. (AP) – Tim Rhodes turns 58 next month, but exposes no hang-ups on getting closer to 60. Instead, he exposes himself—and shines a light on an opportunity that many have never considered. On local college campuses, Rhodes, of Lancaster, is known as an art model—one who gets paid to pose nude for art classes.

“I don’t have a beautiful body,” he said, “but it’s interesting.”

His athletic build is a plus, but not a necessity. Art models, male or female, can range in age and physique. After all, Rhodes pointed out, the students are not “drawing a Ken doll.”

“There is a rich history involved in drawing a nude model,” said Matthew Weigle, a 2001 alumnus of Pennsylvania College of Art & Design who will teach a course on figure drawing this summer using live (nude) models in the classroom.

“It’s the most beautiful and expressive form, and the most difficult. It requires you to draw quickly, to capture the essence of the pose. If you can draw the (human) figure, you can draw anything,” Weigle said.

Rhodes prepares himself for each art gig simply by being hygienic and well put-together. “I’m always freshly scrubbed and moisturized,” he said while being interviewed—fully clothed—outside the department store that employs him full time.

Art modeling also is a second job for 31-year-old business owner Tanya Slifer, a Harrisburg resident who has posed nude for art students at the Lancaster campus of Harrisburg Area Community College.

“I chose to become an art model because I wanted to become more comfortable with my self-image,” said Slifer, a mother of two. “My favorite part is seeing the final outcome. It enables you to look at yourself in a more objective way.”

Slifer keeps herself fit. “It has nothing to do with actually modeling,” she said. “It’s more for my own desire to be healthy.”

She maintains a professional demeanor as much as possible while modeling, but added that there are times when she will overhear something funny said by a student and she’ll giggle. “I’ve passed gas,” she admitted, or had to belch.

“There’s definitely interaction; Mona Lisa had her smirks,” Slifer said. To hold a pose while nude, she earns between $10 and $20 per hour, with each assignment usually lasting 3 hours. Rhodes gets paid similarly.

To those who frown upon the use of nudes, Weigle advised they take a greater look at history to educate themselves.

“(The nude) is the best vehicle of narrative and expression,” Weigle said. His favorite painting is Massacre of the Innocents, (circa 1610) by Peter Paul Rubens, in which flesh abounds.

A mutual appreciation for art, between the model and student, is beneficial, and Weigle prefers models who enjoy what they do.

“There’s a certain level of compassion that occurs between a model and a student,” Rhodes said. “There’s no talking. The model is expected to be professional.”

Rhodes achieves a sense of Zen while posing, he said, and often doesn’t know how much time passes while he’s on display. Maintaining a pose can be difficult, he warned, and he considers his endurance before selecting his stance. Some instructors prefer to choose the pose; others leave it up to the model.

He said he learns much from hearing the teacher instructing the class, which also helps prevent him from dozing off. Dozing off can create somewhat of a work hazard.

On one job, an art instructor pretended to shoot Rhodes to create a dramatic scene for his students—the model lying “dead” on the floor. But, as time passed, Rhodes fell asleep and, as happens with males, when aroused from his slumber, “there was more of me to draw than there was before.”

However, he was able to quickly save, er, face.

“I was embarrassed enough,” he said, “that it was not a problem for long.” 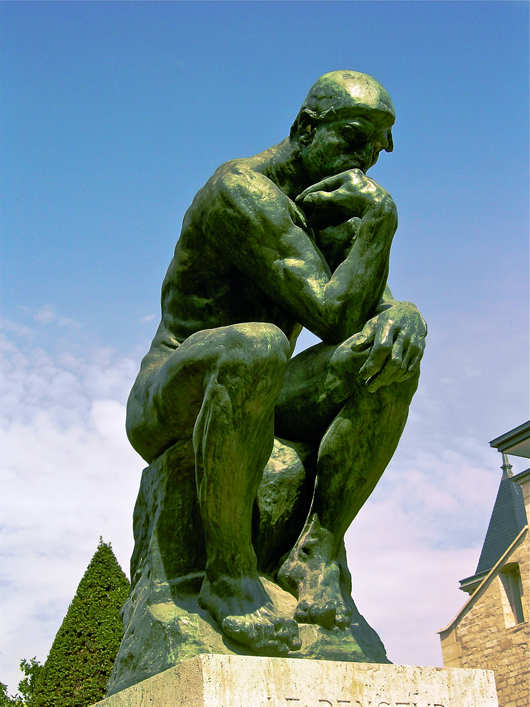 ‘The Thinker’ by Rodin located at the Musée Rodin in Paris. Image courtesy Wikimedia Commons.