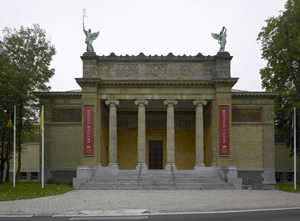 Scene of the theft, the Museum of Fine Arts in Ghent, Belgium.

BRUSSELS (AFP) – A stolen 17th-century painting recovered by Greek authorities with great fanfare may not be an original piece by the Flemish master Pierre Paul Rubens after all.

The Fine Arts Museum of Ghent in Belgium’s Flemish north greeted news reports of the painting’s recovery with joy on Friday, saying it hoped to bring it to its rightful home soon, one decade after it was snatched from its walls.

But the museum said the oil sketch that was stolen in 2001, The Calydonian Boar Hunt, is now attributed to one of Rubens’s followers and not the celebrated painter.

“The news in the press was received with great enthusiasm by the museum staff and collaborators,” said Marie-Julie Dellaert, spokeswoman of the Fine Arts Museum of Ghent.

“If this news is confirmed it is hoped that the work can be exhibited in the museum as soon as possible,” Dellaert said, adding that authorities had yet to contact the museum.

The Greek culture ministry announced Thursday that it had recovered a Rubens painting dated 1618 that was stolen in Belgium in 2001. Two Greeks were arrested in connection with the case.

The ministry gave no other details, but the museum in Ghent was hit by a robbery in 2001.

At the time, thieves grabbed two paintings from the museum. On their way out, Dellaert said, the robbers dropped one of the artworks, The Flagellation of Christ, but ran away with The Calydonian Boar Hunt.

While the dropped painting is a genuine Rubens, the museum said the other piece was probably copied by one of the painter’s assistants from the original oil sketch, which is now in a private collection.

“It is itself a vigorous sketch and an attractive painting. The work is a good example of how Rubens’s style was assimilated by his pupils,” Dellaert said.